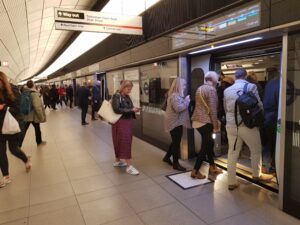 Can a new road any longer ‘transform your journey’? Or simply shift you faster to the next jam? But trains certainly can.

What was the brightest and best news in travel and transport this week? Anwhere? Visitors to the World Travel Market (WTM) at the Excel Centre in East London would have being given many suggestions by exhibitors from all over the world. But I think the answer was just outside the door of the enormous exhibition centre.

The Elizabeth Line opened fully last Sunday, November 6, 2022. This is its first week as a joined up railway, with through trains running uninterrupted over its more than 100km length. (The line opened in May, but in three separate sections.)

Until this year you needed a keen eye for train connections, platform switches and a lot of patience to reach WTM, with as many as three changes from Central London on a mix of Docklands Light Railway (DLR) and Underground trains.

It was a travel experience in itself, negotiating the well-meaning but inadequate DLR, not much more than a network of branch lines affixed to East London, with leisurely, small-scale trains to match.

Travelling back into London, you would wait for ages with the homeward-bound throng for that rare train running all the way to the bull’s-eye destination, Bank Station. And even there you were a few stops adrift from Central London on the Underground.

This year, though, we were upgraded from Thomas the Tank Engine to Gordon and his Express Train. “Move along the platform,” said the announcer. “This Elizabeth Line Service has nine carriages.” The sleek new train glided in, destination Reading.

Reading! For those unfamiliar with the geography of the Southeast, that is right through the middle of London and 36 miles (59 km) out on the other side. On the way it stops at stations in the heart of the capital, Tottenham Court Road and Bond Street. The last time I came to WTM I ‘d have been lucky to get beyond the next station without changing. This time I was in Tottenham Court Road in 16 minutes.

The Elizabeth Line, with its new tunnel under the heart of London and a long string of new stations, is a rare British triumph, the only unalloyed infrastructure success since the 2012 Olympics. The trains are fast and smooth, the stations vast and comfortable. The two-year delay is an annoyance that will shrink to a footnote in future histories.

It will transform transport in and around the capital. From deep in East London I could have travelled direct to Heathrow,  and connected to railway stations, once a tedious crawl by Underground train, where I could be whisked away to all points. I could have journeyed far into sylvan Essex in the east and out to the rural reaches of the river Thames in the west.

The line cost £18.9 billion. Not such a lot of money when you compare it to the cost of building roads. This same week National Highways released a ‘virtual drive-through’ of the controversial £2 billion road and tunnel it wants to build under and through the Stonehenge World Heritage Site, with a “Wondering how the #A303Stonehenge improvements will transform your journey?” headline. The new road, if approved, will save a few minutes travel time, but lock in CO2 emissions well into the 2030s, or later, until road transport is fully electrified. The Elizabeth Line is electric, and will, in a relatively short time, be carbon free when the electricity it uses is entirely generated by renewables.

Future generations will celebrate the Elizabeth Line on its centenary. I doubt whether too many champagne bottles will be cracked at Stonehenge 100 years if the proposed ‘improvements’ go ahead.