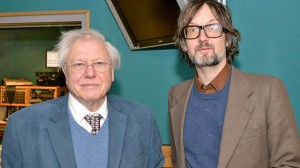 Sir David Attenborough is an obliging chat show guest, but it’s quite unusual for him to appear on a popular music radio show. So is quite a coup for Jarvis Cocker to persuade him to join his Sunday afternoon show on BBC Radio 6 Music, today (Sunday, 7 April, 2013).

On the other hand, perhaps it is not. Sir David has wide ranging tastes, and, when you come to think of it, much of his filmmaking has been set to music – the music of nature, the heavenly choirs of birds, the toccata and fugue of the waves, the heavy percussion of waterfalls, the drumbeat of volcanoes.

The BBC programme notes promise – “surprise tracks, random thoughts and spoken word as Jarvis rifles through his record collection.” Attenborough will talk with customary modesty, about his great career, but will have something quite specific and not so well-known from his early career to talk about with Cocker, former Pulp frontman and figurehead of the Britpop movement of the mid-1990s and now a solo artist.

The focus will be Song Hunter,  Attenborough’s third TV series, which he produced in 1953 on American ethnomusicologist Alan Lomax (1915 – 2002). Lomax was one of the great American field collectors of folk music of the 20th century. The young BBC broadcaster had made a remnarkably prescient choice of subject. Lomax went on to influence Miles Davis and the young Bob Dylan.

Attenborough’s very first programme for the BBC was Coelacanth, a short film featuring biologist Julian Huxley discussing the rediscovery of the prehistoric fish. He made it in 1952. His next credit was as producer, in the same year, of Animal, Vegetable, Mineral? This was a  quiz show in which eminent scientists would try to guess the origin of specimens from museum collections.

After Song Hunter, made as six 20 minute episodes, Attenborough went on to make, in 1953, his first Zoo Quest. The series launched his career as the foremost nature documentary presenter.

Lomax had been in Europe since 1950, after playing an important role in both the American and British folk revivals, as well as recording thousands of songs and interviews for the Archive of American Folk Song at the Library of Congress. Not many people would have known that, at the time, he was being investigated by MI5 – he’d already been questioned by the FBI, who could find nothing on him. I doubt if the young Attenborough would have been remotely troubled, although the staid old BBC might have had its doubts about him interviewing a potential threat to the state.

In 1950 a pamphlet edited by former FBI agents listed Lomax as an artist sympathetic to Communism. He was in good company. Others listed included Aaron Copland, Leonard Bernstein, Burl Ives and Dorothy Parker.

In 1952 Lomax sailed for Europe, to develop a library of world folk music for Columbia. He left against a background of mounting anti-Communist hysteria, with the House Un-American Activities Committee widening its hearings, and more legislation being planned against “subversives”.

Throughout the 1950s Lomax was based in London, from where he edited the Columbia World Library of Folk and Primitive Music, issued on newly invented LP records. It could be said he was doing for traditional music what Attenborough was to do for wild creatures around the world, recording, charting, and setting down for posterity.

He spent several months in Spain, for example, where he recorded thousands of musical items from the regions, making notes and taking hundreds of photographs, of “not only singers and musicians but anything that interested him – empty streets, old buildings, and country roads”.

Jazz arranger Gil Evans and jazz musician Miles Davis were impressed by the beauty of pieces such as the Saeta, and a panpiper’s tune Alborada de Vigo from Galicia. They worked them into Davis’s 1960 album, Sketches of Spain. Lomax repeated his musical research in Italy, Scotland and England.

In 2007 it was revealed that, in the early 1950s, MI5 had placed Lomax under surveillance as a suspected Communist. Its report concluded that although Lomax undoubtedly held “left wing” views, there was no evidence he was a Communist.

In 1997, at a concert in Virginia, Bob Dylan acknowledged Lomax, who was in the audience, as one of the people who had introduced him to folk music.

“Yes, he’s here,’ said Dylan. “I used to know him years ago. I learned a lot there and Alan … Alan was one of those who unlocked the secrets of this kind of music. So if we’ve got anybody to thank, it’s Alan.”

And what of Sir David’s musical tastes? They centre on classical music, but they branch out in some interesting directions. He made the following choices on Desert Island Discs in 2012 (his fourth appearance).

Schubert: Impromptu No.1 in F minor;

Handel: And the Glory of the Lord;

But perhaps the most intriguing choice was The Lyre Bird. Not a piece of music but the bird itself.

When I interviewed Sir David in ther 1990s, for an article on the series Life of Birds, I asked him about the birds that impressed him most for their capabilities. (My book of Attenborough interviews, David Attenborough – Talking to a Great Broadcaster)

“The world’s best bird mimic? On a fallen trunk in the dense southern beech forest in Australia, Attenborough came face to face with the lyre bird, attracted by a recording of its own voice. The lyre can imitate at least 12 other birds. It can do the whirring of a camera’s motor drive and the click of a shutter. It repeats the engine of a car, and the din of a car alarm. But it can do something more, that perhaps no other creature can – it speaks of its own destruction. It can imitate the screetch of the chainsaw wielded by the loggers coming to cut down its habitat.”

Another link to David Attenborough –  Talking to a Great Broadcaster.