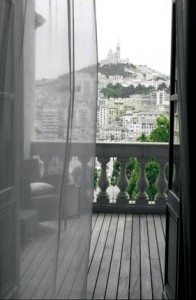 Room with a phew

Marseille, for so long the dark, dowdy, run-down and edgy seaport on France’s Mediterranean coast, has been transformed in this, its year as European capital of culture (2013).

Is this the year, too, when this renewed and restored city finds a hotel to match its proud new status?

Time will tell, but the InterContinental Marseille – Hotel Dieu, which opens this month (April 2013), comes with some impressive qualifications to fill that role. Best of all is its sumptuous position, high on a hill looking down on the Vieux Port – 72 of its 194 rooms have panoramic views down to the Mediterranean, past the ornate old Notre-Dame de la Garde Basilica.

The building, in the oldest district in Marseille, Le Panier, links directly back into the city’s distinguished architectural past. The original Hôtel-Dieu, the name given to the principal hospital in French towns, was extended to its present form in the 1800s. It stands on the site of original houses of healing dating from 1166, when it was founded by the Confraternity of the Holy Spirit. The original Hôtel-Dieu was established on the site in 1593. The last patients left in 1993. It lingered on as a college for student nurses until 2006.

Architect Anthony Béchu, an expert in the restoration of listed monuments, kept faith with the version of  original designer Mansart, with his colossal staircases, arched galleries, vaulted passageways and large terraces. Architecturally, it was considered one of the finest hospitals built under the Ancienne Regime. The informed opinion of the architectural critics is not yet in, but there is no doubt that Béchu has created a very impressive 5* hotel for the city.

Something else distinguishes the hotel. It has been built to some of the highest environmental standards in France, as one of the first hotel restructuring projecs subject to Environmental Quality certification.

The classification covers all elements of construction, such as materials used and its environmental performance once complete, including energy and water management, visual comfort, acoustics, and air quality.

One of the showpieces of the restored building is the Cassis stone facade, with its imposing arch. Details inside include the lobby’s black and white stonework, which recall the historic hospital floors, and pay visual homage to the Sainte-Marie Majeur cathedral and the Basilica of Notre-Dame de la Garde.

The designer has worked in several Mediterranean references, with sculptures of enameled fish, and combed cotton carpets that remind you of a sandy beach.

The Hotel Dieu offers the features you’d expect from accommodation of this quality, including a health and fitness centre behind floor-to-ceiling windows, indoor pool and a Spa by Clarins equipped with a musical indoor pool, two saunas and a hammam, together with beauty treatment booths.

Michelin award-winning chef Lionel Levy oversees the Les Fenêtres restaurant, which is decorated in a traditional brasserie style with walls of glass and mirrors.

The big feature in the Le Capian bar is the reproduction of an 18th century painting of the Bay of Marseille. The style is contemporary, with seats of blue, the city’s colour. The bar and the brasserie extend onto an outdoor terrace, giving a fine view over the Vieux-Port and Notre-Dame de la Garde.

Whether the hotel succeeds in its ambition of becoming the landmark 5* hotel in the South of France remains to be seen. There are, after all, lots of competitors. But it has given a very considerable uplift to old Marseille, when not so long ago the easiest solution would have been to demolish a fading building and build something new and inappropriate.

Details of the hotel.