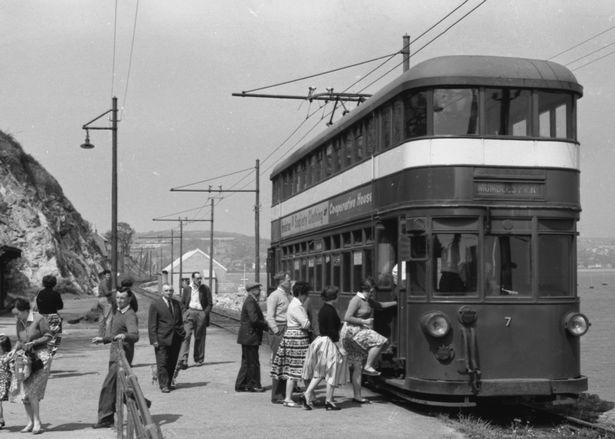 This is the fourth in a series of extracts I shall be publishing in August in the lead up to the 50th anniversary of the day, Saturday, August 31st, when Garfield Sobers became the first player in the history of cricket to hit every ball of an over for six. It’s taken from my e-book Sobers six hit perfection at Swansea: That was the Day

Many, you might say most, venues serve their functional purpose in a disconnected urban environment. St Helen’s was different, and I like to think rather special, in the way it merges into an attractive urban backdrop.

St Helens is just 100 yards from the sands of Swansea Bay, the curve of coast which poet Walter Savage Landor declared to be better than the Gulf of Salerno and Naples “for scenery and climate”. At low tide the sea retreats more than a quarter of a mile down the wide, sandy beach. At high tide, the sea is scarcely 100 yards from the outfield. Although it is hard to say why, cricketers who play there believe the retreating and advancing tide has a big influence on what happens on the cricket pitch. Although nobody has suggested it had any on this particular day.

I was born in the eastern side of the city, in Morriston, constructed as “Wales’ earliest planned industrial village”. It was built for the workers of the tinplate and copper industries that built up along the banks of the river Tawe in the 18th century.

In many a lull in play I would sit on the terraces making connections with Swansea’s history, my history. My maternal grandparents moved to Wales in the early 1900s from the Isle of Dogs in London. My grandfather worked on the construction of the “Slip Bridge” over the railway and road just outside the ground.
Heading east along the waterfront from St Helens, it’s a short walk to the docks where the heroic dog Jack, a black retriever, earned his fame in the 1930s by diving into the docks and saving people. Today there is a memorial to Swansea Jack on the waterfront. In 1936, he was named “Bravest Dog of the Year”.

I mention these places to underline how interlaced with culture and history this locality was, and still is. What happened on August 31 was only one more piece of history to set alongside so many.
One man who knew the ground and its surroundings well was the poet Dylan Thomas, who was born less than a mile from the ground. This passionate cricket follower often watched matches here. (He set several of his short stories in the vicinity.) It was this very beach, behind the ground, where Dylan Thomas imagined two “hale young men” walking into the waves, still puffing on their pipes in “A Child’s Christmas in Wales”. My mother, a student at the Swansea College of Art, and an exact contemporary of Thomas, recalled being an object of the poet’s silken tongue chat-up technique.

There is another, if somewhat tenuous, link to the August 31st match. John Arlott, who wrote so fulsomely about Sobers, was a good friends of Thomas. Both were consummate broadcasters. Arlott, too, was a poet, both in print, and in his commentaries. In a letter to Arlott, Thomas wrote: “You are not only the best cricket commentator – far and away that; but the best sports commentator I’ve heard, ever; exact, enthusiastic, prejudiced, amazingly visual, authoritative, and friendly.”

To complete the literary connection, Sir Kingsley Amis, novelist, poet and critic, was a lecturer at nearby Swansea University from 1948-1961. Although his Lucky Jim is supposed to be based on a Midlands university, I wonder if  he drew inspiration from his time in Swansea.

I’m back on the terraces, looking back to the narrow gap between the ground and Swansea Bay. Side by side here ran the former London Midland Railway from Swansea’s Victoria station to Shrewsbury and the north, and the long lamented Mumbles Railway. “The Mumbles Train” is said to have been the world’s oldest. It had been a familiar, trundling, clanking presence as long as cricket was played at the ground.

From the east terrace I used to watch the evening train from Manchester pulling in at the station just outside the ground. But the tall red Mumbles Railway tramcars – the double-deck cars were the largest built for use in Britain, with room for 106 passengers – which ran the six mile length of the Bay, were gone by the time I started watching cricket there. 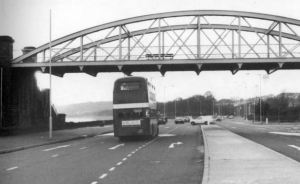 Slip Bridge. St Helens is in the right of the picture, half way up

YouTube has a heart-warming film of the Mumbles Railway, made for the BBC and narrated by the warm and erudite Wynford Vaughan Thomas. He recalls riding the trams on the “uncomfortable but altogether human railway” with his friend Dylan Thomas. “If we were very lucky we could see for nothing from the top of the tram as Glamorgan played.” The two Thomases would recite a poem by Dylan as the tram trundled around the bay.

It’s a charming piece of time travel into old Swansea, that film. We’re back in the 1950s, sitting in the driver’s cab as the train rocks and rolls under the massive footbridge over the Oystermouth Road and the two railways. That Slip Bridge was just beyond even a Sobers six hit from the cricket ground. While working as a draughtsman on its construction, my grandfather lost a leg in an accident. They kept him on, but in a minor role.

The Slip continued to make its muscular leap over the now busy dual carriageway until 2004. It was removed, supposedly over health and safety concerns, and now stands, sad and bereft of its supporting piers, further along the Promenade.  Some people are calling for the bridge to be returned to its original site, or at least replaced with a replica. I doubt if that will happen. Today only the Guildhall and Brangwyn Hall, and the St Helens ground itself, stand much as they were, components of the old Swansea, which was diminishing even in 1968.