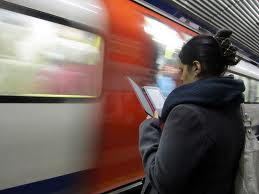 Can't put it down.

You’re on a bus or a train in Derbyshire. The person sitting next to you is reading a book on an e-reader. “Ah”, you think. “Oh for the days of the battered paperback. Or the library book, even. That’s coming to an end. Soon be gone. Killed by technology.”

Except it isn’t. Quite soon, in this Midlands county  at least, people with library tickets will be able to “borrow” books from their local public library,  for nothing, to read on any PC, laptop, (most) ebook readers  and up-to-date smartphones. They won’t have to go in to pick them up.   The books can be downloaded online.

And they won’t even have to  take them back. As in some Harry Potter spell, the books will magically dematerialise on the e-reader after three weeks, following a 24-hour warning. (Sad, really, the end of the library fine, at the click the button.)

Libraries are under threat throughout the UK,  because of budget cuts in the public sector. Campaigns are being fought even as you read this to stop local branches being closed altogether, or to pursue some new ways of keeping the library open through volunteer power and new initiatives.

Derbyshire is one of the first authorities to offer e-borrowing. From mid-July (2011), e-books will be available for free download to all members of the county council’s libraries. Titles will include the latest best sellers, as well as old favourites. Other councils will study Derbyshire’s initiative closely.

There is one  technological elephant missing from the room.  At the moment  Amazon won’t let  library books be downloaded to   it’s market leader Kindle device. However this is likely to change. It just has in the USA,   where e-borrowing from libraries is already very big.

In April (2011) Amazon announced that readers would soon be able to “borrow” titles from 11,000 libraries on their Kindles, a reversal of the company’s previous policy. Until now, library users who borrow books could read them on Barnes & Noble’s Nook, the Sony Reader, the Kobo reader, and on laptops and smartphones.

We’ve known for some years that the future is digital, and public libraries  recognised that truth from the very beginning  by embracing new technology.  But could books that don’t even exist in a physical sense  being the next big  development?

It looks as if  reading devices, such as the Kindle, which I suspect vex purist public library borrowers greatly,  could come to play an important part in saving at least some local village library which  are now under such severe  threat.