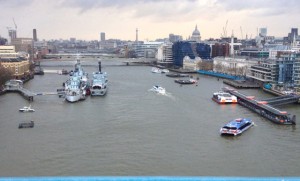 The Thames, seen from Tower Bridge

The Thames Path featured on today’s Thought for the Day. The speaker, the Rev Dr Jane Leach introduced her talk by describing her walk along the opening section, from the Thames Barrier to the heart of London. She plans to walk the entire 180 mile of the path, which leads to the source of the river, in Gloucestershire.

I do hope this mention of the Thames Path will inspire others to make this wonderful walk, billiard table-flat and easy underfoot, and so full of history.

I walked it myself, shortly after it was completed as a Long Distance Trail. This is an edited extract from my book ‘A Walk Along the Thames Path‘.

The Thames carves a silvery dividing line across southern England. It percolates through English literature – many Dickens novels contain a Thames scene. It laps around the foundations of distinguished addresses. It is the sight of epic sporting encounters, the inspiration of artists, the route followed by monarchs in gilded barges. It is also a very efficient drain. It is foreground to the “Mother of Parliaments” at Westminster, and backdrop to the world’s model for the botanical garden at Kew. Alone of England’s rivers, it has its own police force.
At one end of the Thames you may picnic over the river on ancient farm bridges garlanded with stonecrop, and watch aerial warfare between monstrous dragonflies; at the other end is the Thames Barrier, reposing in the departing flow like a shining line of walnut shells. It reassures Londoners that they no longer fear flood, although I wrote that line before we were even aware of climate change. In between there are bridges galore. They have been, through the ages, variously fought upon and escaped over. Some mark the stages of the world’s most famous contest on water – the Oxford-Cambridge boat race. The world’s most popular run, the London marathon, has its later stages alongside the river in Central London.
On two bridges the ancient privilege of collecting tolls is still exercised by attendants who snatch coins from crossing motorists in a fug of traffic fumes.
River Thames bridges have come and gone over the years, destroyed by age, fires and developers, enev sold to Americans. Some of the London bridges were built in the 1930s when it was customary for them to be opened by, at the very least, the Prince of Wales, who once managed three West London crossings in a day.
Why, then, did the Prime Minister of Canada get the job of opening Chelsea Bridge in 1937? I can only assume the Prince, then Edward VIII, had been booked for the job but was detained by matrimonial complications.

Distinction is bestowed haphazardly all along the Thames bank. At Cricklade is one of the finest natural flowerbeds in Britain, the North Meadow national nature reserve, a huge, unhedged, mile-long torrent of red and yellow flowers and grasses, its colours subtly spreading and dissolving from April to June. The path passes through it.
Around Marlow long established boatbuilders still turn out traditional slipper launches, their sterns tapering to the thickness of a wafer. At Henley the walker who might never afford admission to Ascot or Twickenham may walk free of charge through the nearest thing England has to a Venetian pageant, and see some rather good boat races as well.
At Cliveden the bankside walker has the chance of just two glimpses of England’s closest equivalent to a Rhine castle, the former stately pile of the Astors, sitting haughtily on a wooded hill.
The Thames unifies many places and people, and an awful lot of history. 20 miles from Cricklade, where the river is little more than a weed-choked furrow, I met a retired Thames waterman who had rowed his boat upstream from Sheerness. He spent his working life plying the reaches between Brentford and Wapping, and had always wanted to know what lay around the next bend.
I walked the river from west to east, from the Ordnance Survey-approved source, in a depression under a protective spinney in a field close to the Fosse Way near Kemble. This way the walker may watch the river grow and swell, although an equal case can be made for going in the opposite direction, in the hope that you may be rejuvenated as you watch the river grow ever younger and slimmer.
Apart from a few urban interludes, the path offers pleasant countryside and fine views all the way to the M25 at Staines, where grassy bank finally gives way to a tougher town surface. Most walkers join the path at points east of Reading, where the Victorians created a latticework of railway lines offering the prospect of coffee in Belgravia and lunch on a skiff at easily-reached Pangbourne. Most of them are still there. They offer a a huge range of possible walks, as the river twists and winds close to stations down through Berkshire and Surrey and into W. London.
In the remoter lands west of Oxford, the walker may find a solitude which is rare in southern England. The 17 miles section from Lechlade to Newbridge (“new” on the Thames invriably means ancient) illustrates the point. In the vacant flatlands where the map contains wide white spaces, devoid of contour lines or geographical features, I found myself, midway between Buckland and Chimney, in a riverscape to challenge those who think of “remote” only in terms of upland wilderness or wave-pounded coast.
I stood on the flat bank and looked all about. Trees and meadows, smudged scarlet with clover, faded into the flat infinity. For a few minutes there was not a person, boat or dwelling visible in any direction. I have found a discrete paradise. The peace was finally broken by a maintenance boat tearing up river.
Hereabouts the river follows a zany course, oscillating wildly through an ancient landscape. The path took me past fields named Cowslip Close and Water Furze; here a former navigators’ pub, there the site of a lapsed ferry, crumbly stone walls enclosing spots where cattle once took to boats.
There are ancient living monuments all along the bank. I chose the wraith’s route through one tottering waterside ash. It’s heart had been hollowed out, but it still gathered sufficient sustenance from the ground through a flimsy frame of wood, to produce a vigorous and defiant canopy of leaves, like a well coiffed centenarian. Even at the slowest amble, the horizon is close enough over the flat fields. In these shortened perspectives new features, spinnies, hills and farms break into view and pass just as suddenly out of sight. A dense screen of cow parsley will draw back to reveal an ancient church in stone the colour of butter, adrift in a fidgeting sea of wheat. Little green mats of vegetation dawdle downstream; in this way Gloucestershire’s rare flora is set adrift to colonize Middlesex.
It’s the same river 140 miles east, only wider. Well, that’s not true. It’s like comparing a sprightly 75 year old to a toddler. The authorities were sensibly persuaded by the East London boroughs to continue the thread to the logical finishing line of the Thames Barrier. This is the Thames which people know least, directly following on the Thames they know best, if only subliminally from those nostalgic scenes of the gaslit embankment in innumerable black-and-white B-movies.
The old books warned respectable people not to venture past Tower Bridge, the last Thames crossing to be built on a fresh site. It was a sour, violent land of strange crimes and rituals. There Gaffer Hexham picked the pockets of the drowned in Our Mutual Friend. Now it is studded with ever-higher monuments to commercial self belief, all plate-glass Eiger faces and lofty atriums full of greenery.
The docks are dead but their aromas linger. In the canyons between refurbished warehouses around Cinnamon Wharf I swear I picked up the smell of spice, as pungent as in a Christmas cake factory.
I walked onto Woolwich, when the river is full and wide, transmuting into sea. On the other bank redundant cranes, like those horrors from HG Wells’ War of the Worlds, still stalked the concrete deserts. But the argosies of every nation which used to tie up here, with their fretwork of masts and spars and cordage, have gone. There are ducks in their place in the gale-whipped waters. It is all a long way from that Gloucestershire field.
My book, published by Michael Joseph, is, sadly, out of print. However libraries still hold it.