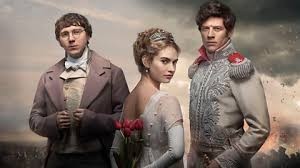 St Petersburg is vying for a place among the world’s great short-break destinations, after the BBC’s War and Peace. I remember this city from long ago, as black and white Leningrad. But I much prefer the remastered Technicolor version, with its fine palaces, canals to match Amsterdam, wide boulevards on a par with Paris, and palaces to rival Rome.

The BBC’s sensuous serialisation was filmed in, as well as those convenient yet inauthentic Lithuanian locations, real St Petersburg buildings of nineteenth-century Tsarist Russia, including Catherine Palace (setting for one of the highlight scenes, the Tsar’s Ball), Yusopov Palace, the Russian Museum, and the Hermitage Museum, a convincing stand-in for the Winter Palace.

Corinthia Hotel St Petersburg, in Nevsky Prospect, the city’s main thoroughfare, has created a package to meet the keen interest in the city following the BBC’s serialisation. The package includes a full-day tour of Catherine Palace, including the Great Ballroom and Amber room, and a tour of the Hermitage museum.

St Petersburg was the capital of the Russian Empire from 1703 until 1917. It contains a wealth of palaces, monuments and museums  from this splendid era. The Corinthia Hotel itself, with its opulent interior, is the product of a renovation of two nineteenth-century buildings in 2009.

The two miles long Nevsky Prospect, where the Corinthia Hotel is situated, is at the heart of one walk that unites the power and the glory of this city. Start in the vast Palace Square where the Bolshevik revolution began. Marvel at the great statue of Peter the Great on horseback. Then head down Nevsky – Russia’s Champs Elysee – and imagine Tchaikovsky and the dancer Nijinsky taking the air (ballet was invented here).

The walk takes you past shoulder-to-shoulder palaces and churches, the monumental Kazansky Cathedral, and the Anichkov Bridge with its splendid horse statues.

The Hermitage is one of the world’s foremost collections of paintings, sculpture and treasures. First created for Catherine the Great and kept safe by the Soviets, it’s a match for the Louvre, with 350 exhibition rooms housing the best collection of French Impressionists outside France, and entire walls of Rembrandts and early Picassos. In the state rooms of the Winter Palace you glide over polished floors under glittering chandeliers.

People inspired by the BBC serialisation may be looking to the summer for their travels. And while the great galleries and palaces are worth visiting at any time of year, consider the period of the White Nights – that glorious stretch in the summer when it never really gets dark.

Come summer, bedtime is abolished in this most northerly of cities. Under a milky, midnight twilight it is yesterday, tomorrow and right now – all at once. In an exuberant retort to the long, dark, searingly-cold days of winter, the city designates White Nights as the 50 days from May to July when the sun falls no lower than 9° below the horizon. They stage all night performances in parks, palaces and the magnificent Mariinsky Theatre (formerly the Kirov). There’s a White Nights Jazz Festival www.jazz.ru, and street musicians and food stands all over. Our treasured memory is strolling at 1 am alongside the river Neva in a strange, magical light past the Peter and Paul Fortress and the cruiser Aurora, whose booming gun announced the revolution.

When we visited in Soviet times, dining out was for masochists desperately seeking variations on a single dish, usually stroganoff. Today there is a wide choice of good eating, from Lebanese to Georgian, French to Italian. But for the hungry hard-walking tourist, diving down a side street on the hunt for a Tolstoy or Dostoyevsky haunt, or to find another canal bridge for that perfect picture of a palace reflected in the water, the blini is the perfect street food. Look for the wooden stalls. Somewhere between a crepe and a pancake, blinis are made with buckwheat flour, and filled with mushrooms with sour cream, smoked salmon, even caviar.

How do you relax in this city? There’s one invigorating way, the banya, Russia’s meaner version of the sauna. Relax. Russian soldiers may have been at ease with nudity in War and Peace, but  you aren’t expected to sprint stark naked out of a steaming banya at -20 centigrade and dive into a snow drift. That’s strictly for the diehards in the midwinter countryside. They tone things down in the city banya, where the sexes are segregated and you can cover up.

The optional extra, as humidity approaches 100%, is some brisk beating with birch twigs – to open up the pores. You may thrash anybody standing nearby, but expect them to hit back. Philosophical regulars say the quick switch from jungle heat to the ice cold plunge pool and back super-charges the soul and as well as the body. Whatever. You feel terrific afterwards.