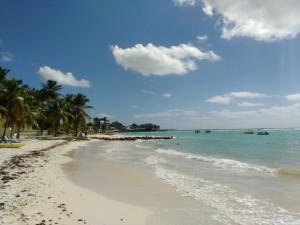 2016 is the year to celebrate Garfield Sobers, probably the greatest all-round cricketer who ever played the game. He was born and still lives on the Caribbean island of Barbados, and that connection is reason enough to pay a visit.

I suspect, however, that this scintillating island would be noticed and remembered by more people this year for a quite different celebrity connection. It is where, even before their series opens as one of Amazon’s big TV productions, the BBC’s former Top Gear team has been filming.

This week (March 2, 2016) the team helpfully reminded the world that they were on the island, and filming, with Tweets of a, we hope, not too serious road accident involving presenter Jeremy Clarkson. Shots of sandy beaches and romantic sunsets followed, with the standard ironic comments about hard days in the office.

There is nothing particularly challenging about  this small island’s topography to appeal to such buccaneering drivers, although  Clarkson at least would be drawn to the libertarian parking rules in the capital Bridgetown, where drivers pull up and park in the yellow line-free streets, even in the city centre, just as they did in the UK in the 1950s.

But I’m sure the publicity will do wonders for the island’s tourism promotion, always assuming that the team observe strict road safety rules over the coming days and weeks.

The fact remains that Messers Clarkson, May and Hammond are entertainers not supremely gifted sportsman, and these, in the long run, are the celebrities who really count around here.

Not that there is much chance of arriving visitors missing the point. A huge photo of an imperious Sir Garfield Sobers in full swing welcomes me to Barbados International Airport. The first cricketer to hit six sixes in an over, he was a sporting titan of the 20th century, my hero for many years. And he came from this happy little island. He will be 80 this year (2016), and the world of sport will fete him.

I already think I know this place through the glorious feats of Sir Gary, and others. (Incidentally, how does an island with the population of Sunderland, just 21 miles by 14, produce such a galaxy of cricketing greats, men like Malcolm Marshall, Joel Garner, Gordon Greenidge and Desmond Haynes?

Many people will remember the island for another reason. On the way to my room at the Sandals resort, the rich tones of Harry Belafonte issue from a speaker in the bushes. His song “Oh, Island in the Sun” is exquisitely appropriate. It is almost 60 years since the film of the same name launched the Caribbean dream.

They chose Barbados, with its abundant white sand and palm trees, as one of the locations to stand in for the fictional Santa Marta, and ever since this island has been high on the travel wish list of generations of British.

The connection goes back much further than that, of course. Bridgetown, established by English settlers in 1628, has a deep historical pedigree. UNESCO praises it as an outstanding example of British colonial architecture, consisting of a well-preserved old town built from the 17th – 19th centuries, which testifies to the spread of Britain’s Atlantic empire. The military garrison contains numerous historic buildings.

Much of the original town survives. Wooden, Colonial-style houses are painted all manner of bright colours. And there more recent, and familiar, features. “ER” postboxes from before the island’s  independence from Britain in 1966, and still in use, are ubiquitous. There’s a statue of Lord Nelson. I spot a Bolton Lane.

Some Bridgetown details are endearing old fashioned. There’s the easy street parking in the city centre streets. And the man solemnly playing hymns on a saxophone.

Then I find a reminder that we are firmly in the tropics. A sign in a city centre park warns: “Beware of falling breadfruit. Do not stand under trees.” I pass little cafés serving the island’s distinctive cuisine, such as macaroni pie and ham cutter. Another proclaims “Hot Legendary Fishcakes.”

But I still need to find that statue of Sir Gary. The man on a coconut stall tells me to go to the famous Kensington Oval ground, ”where England have often come unstuck.”

I sit in the great man’s shadow for a while, musing on cricketing legends past and yet to come.

Walking back into the resort, I meet the ebullient Rohan. He is the busy entertainment manager but has time to entertain me. He has something to say about the great benefit of tourism, just talking to people, whoever you meet them.

Without drawing breath, he tells me how wonderful Barbados is, and how close it is to us, with the Queen as head of State. And how it offends, and puzzles, perfect strangers if you aren’t immediately friendly to them.

He produced a map and, with a dancing finger, guides me round the parishes, from St Lucy at the top, down through St James, St Michael, St Peter and St Thomas, pointing out the best beaches. He is just one perfect unofficial ambassador for this island in the sun, with time to spare for a stranger.