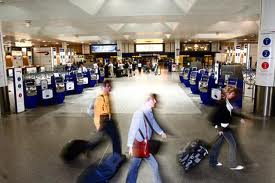 Most people turn up on time

Should airline passengers who are late to board be fined? Rather a lot of people in a recent survey seem to think so. Men seem to be more intolerant than women, on the issue of late comers. (They are likely to have been tarrying in the duty free, rather than arriving late at the airport because of traffic delays, in which case they wouldn’t have been allowed to check in anyway.)

Travel add-ons company HolidayExtras.com. polled 1341 customers in December (2010). 69% of respondents claimed to be always at the departure gate in plenty of time.  17% of the total thought that those who are late to board should be fined at least £50.

It seems that women are more tolerant than men about tardiness, with five per cent more men than women admitting they would like to fine late comers.

Is it that women are more attracted to duty free than men?

A surprisingly high figure of 83 per cent of people said they have never missed a flight because of bad traffic on the way to the airport, the weather, out-of-date passports, missing visas. Getting carried away in duty free was the main reasons for planes taking off without some travellers.

Ben Alexander, HolidayExtras.com‘s head of marketing, said: “It’s good that Brits are so punctual. However the figures still show that almost one in ten people have missed a flight because of traffic on the way to the airport.”

Where are his comments leading? To not taking the risk, and booking a night at an airport hotel before you fly. I’ve done this myself at Gatwick, booking with  HolidayExtras.com and parking at the hotel for the duration of my trip. (In the interest of full disclosure they are arranging for me, as a journalist, to stay again.)

“You can’t predict what the traffic’s going to be like, but you can avoid the risk of a missed flight by booking an airport hotel,” said Alexander.

The company also offer  Fast Track Security at Manchester, Luton, Bristol and Liverpool airports – customers can to go straight to the front of the security queue.