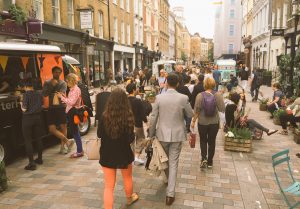 The first “Covent Garden After Hours” takes place this month (July, 2016) from Wednesdays to Saturdays, with a series of special events every Thursday. It’s a smart way to put a focus on the area, and draw its many component parts together, with late night shop-opening, free gifts and inducements, and street food from local restaurants.

On my roughly weekly visits to central London, I hurry through some spots and linger in others.

Good places to exit as soon as possible include Oxford Street, the Strand, the top end of Charing Cross Road (recently redeemed by the marvellous new Foyles, with its top-floor cafe) and Tottenham Court Road, although there is a good new Waterstones there (also with a cafe), and Heals is always worth a browse. I also try to miss out much of Shaftesbury Avenue.

The locations to avoid, then, are anywhere with a major road clogged with traffic.

I like to divert through Fitzrovia and Bloomsbury and head down Monmouth Street to Seven Dials when I can. And along Neal St into Long Acre. Which invariably brings me to Covent Garden.

So where does the Garden sit, as a destination? We have seen the rise of some of London’s other discrete but well-defined mini district – not the same as its “villages”. The South Bank is a very good example. Just think of the unity of the new Hungerford Bridge over the Thames leading into the South Bank, with film, theatre, music, open air performance, street food and inside eating, flowing on down to Waterloo.

Covent Garden came relatively late into this category, despite having a venerable backstory, with its own mini theatre-land and excellent restaurant scene of which Joe Allen is a favourite. But it never quite developed that magnetism as a tourist destination after the fruit-and-vegetable market was relocated to its new site, as New Covent Garden Market, three miles (5 km) away in Nine Elms in 1974.

The central market building re-opened as a shopping centre in 1980, with cafes, and shops, but its public areas never quite acquired that, dare I say it in post Referendum Britain?,  European flavour, such as you find in so many Italian piazzas. And on the edge stands that rather snooty and too venerable for its own good Covent Garden Opera House, its ticket (and champagne) prices beyond too many casual visitors, I fear.

I think it became the place to wander into, and stay, with the arrival of a flagship Apple store in 2010. And now it is given another boost with the first “Covent Garden After Hours” initiative. It is a simple but attractive idea. The National Gallery and in particular the National Portrait Gallery, and even the British Museum, have been doing it, inside their premises, for some time, opening late on Thursday and Fridays. At what cost? Some extra staff, heating and water bills, and surely not much more.

Covent Garden After Hours, from Wednesdays to Saturdays in July, with a series of special events every Thursday, is a smart way to put a focus on the area, and draw its many component parts together.

50 stores, such as Charlotte Tilbury, Karen Millen, Kate Spade, Sandro and Hackett, are opening late. Many of the fashion and fragrance outlets will be offering make up and fashion masterclasses, and handing out gifts to people who spend over a certain amount.

Restaurants are spilling out into the street.  There is a street food festival on the newly, pedestrianised King Street. Taking part are Frenchie (cousin of the Parisian original), Southern Joe’s, Maxwell’s and LIMA Floral.

Balthazar Boulangerie (based next door to famous New York brasserie Balthazar) is selling its artisan breads and pastries.

Portobello Road Gin has set up a pop-up bar in the Market Building, serving innovative cocktails, with live DJ sessions.

There’s an Instagram installation, and Aveda will be offering 10 minutes “touch-ups” before your power pose in the photography spot.

The celebration began on 6th July when fashion designer and illustrator Jean-Charles de Castelbajac – who created the artwork for ‘Covent Garden After Hours’ – unveiled a series of pop-art inspired murals on ‘Reflect London’, the installation of mirrors wrapped around the eastern façade of the Market Building, described as London’s “best selfie spot”.

Many thousands of tourists pour into the capital every day, from other parts of the UK as well as overseas, and many of them need something on the list that will hold them for several hours, outside the far too crowded staple attractions these days, which include the British Museum and the South Kensington museums as well as the more obvious Royal honeypot destinations.

If only to spread them out a little, we need more of London’s districts to be promoted as destinations. I hope the After Hours initiative can finally establish Covent Garden’s identity as one of Central London’s unmissable destinations.