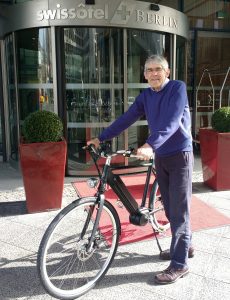 Another observation on e-bikes from Peter Kimpton at The Guardian – November 30th, 2017.

Could the electric bike (e-bike) open cycling to the masses, and reduce our use of the car for short distance journeys?

The cycling revolution has only half begun.

There is no turning back the flood of serious long-distance cyclists, now visible in large numbers on country roads.

Some Sunday mornings the throng of riders passing through my village outnumbers motorists. It’s healthy, sociable recreation. And it stimulates local businesses – pubs and cafes.

But that’s as far as it goes. This is statement cycling, and still rather exclusive. There are entry requirements, unofficial ones, to this gregarious “club”. You need a good bike to keep up with the others, possibly costing many hundreds and possibly thousands of pounds.

You need sensible cycling gear, well-padded in the right regions, responsive to our crazy climate, easy to wash and smart. The uniform is not cheap. And, on the whole, you are likely to be under 65, and rarely over 70. That is even more likely if you are a woman.

I see many of these cyclists. They were not here 20 years ago, and rare 10 years back. I used to think their former absence was simply because Britain isn’t France. We lack those long straight, deserted tree-lined roads, with phalanxes of riders stretched out, respected by motorists as part of the French culture.

The Tour de France in England in 2014 smashed that assumption. England is France. Not only could we turn out huge crowds to watch and support Le Tour, we also produce Tour and Olympics-winning competitors. And now we can match the French obsession with fully-kitted recreational cycling.

But that was as far as it goes. I still don’t see much of a second tier of casual cyclists, biking off to the local shop for a newspaper on a Sunday morning, still less embarking on a short outing to the Chilterns countryside around us. Least of all do I see older folk wobbling along to the post office to pick up their pension.

When I was at junior school, our teacher would cycle to work from his home four miles away. He did it because that cycle commute was normal, and he didn’t own a car. Transport, not fashion or health statement.

I cycled to work in my first job on a weekly newspaper in Leeds. Since then my most consistent use of the bike has been to and from the local railway station.  Even there I am in a small minority. While the increase in traffic around where I live has been noticeable, along with a separate, and more pleasing, growth in recreational cycling, casual cycling has not increased. As far as I can see.

Several things count against this category of cyclists, off to the shops, or simply for some light exercise in their daily lives. The roads are busy, and drivers, while they are increasingly aware of big groups of serious cyclists, are not so sharp at spotting individuals.

People don’t want to be hot, sweaty and untidy when they cycle. Then there are the hills. The hill to the post office in my village is daunting. People want to dismount and push up it.

Is the electric bike (e-bike) the answer? I wrote an article about one in the 1980s. Perhaps people saw it in terms of the French moped Mobylette, launched in 1949 and manufactured until 1997, and were unimpressed. The least powerful model did just 25mph.

They should be now. The e-bikes you see today are stylish, well-designed and robust, with a range of up to £100. But be prepared to spend £2000 or more (although Halfords in the UK sell e-bikes from £599).

I tried one in Berlin recently. My reassuringly solid EGO Movement Man in Black model, a rechargeable battery powering a small motor (http://foundry.berlin/) sported LED headlights, and USB port. The 350W motor took me to 15 mph, with a 50 miles range on a charge. I relished the extra power boost on a Sunday morning jaunt out through the smart suburbs of Grunewald as far as “Thai Park” (Prussian Park) in Wilmersdorf).

Now UK bike company Brompton is joining the e-bike rtevolution, and hope to be producing models in 2017. I rode a Brompton to my first job in the 1970s and, looking back, think it was the best bike I have owned. Stupidly I sold it, rather than leaving it in a shed to languish until I could pay someone to restore it years later.

Could this new generation of more advanced, solidly-made e-bikes usher in a second cycling revolution? They work just like a bicycle, and will behave like a normal machine if the riders choses to cycle in the conventional way, but come with motors and lithium-ion batteries to add power to the rider’s pedal stroke. Certain models can reach speeds up to 28mph. Some can travel up to 100 miles on a single charge.

Features, especially on the models from Swiss and German firms Stromer and A2B, two of the leaders in e-bike technology, include maintenance-free direct drive motors, hydraulic disc brakes, GSM connectivity, USB port charging, powerful lights, electronic gear shifting, and a mobile phone application to control and fine tune performance. In the UK, the A2B Shop, describing itself as the top distributor of A2B electric bikes, offers significant discounts on the majority of the A2B range.

There is a huge pool of potential cyclists, many of whom own and run a car (a new £18,000 car covering 10,000 miles and returning 45mpg costs on average £2,559 to run per year, according to Auto Express’ Driver Power 2015 satisfaction survey). Could people be persuaded to switch to an electric bike for that trip up the hill to the post office, for example, or for longer recreational forays? The more ambitious might consider short-range (20 miles or less) commuting on an e-bike as an alternative to a car.

There are things to consider. There would have to be secure storage places at railway stations and other public places. But e-bikes would be less easy to steal, fitted with electronic locking, and location devices (GPS security tracking).

American company Velocity Commuting Solutions is promoting the adoption of e-bikes by commuters in California. It is targeting people who live 15 miles or closer to work. Velocity brings a mobile showroom to the company and engages car commuters,  showing them how easy it is to convert from driving a car to riding an e-bike to work. Its support package includes 12 months of free roadside assistance.

Velocity currently serves the San Francisco Bay Area. It has plans to expand to other markets in the United States.

Folding bicycle maker Brompton hopes to start selling British hand-made e-bikes in 2017. It is looking at pedelec technology,  which stores energy from pedalling and releases it when the rider reaches a hill. Bromptons were never cheap (their conventional range starts at £785), and have always had up-market associations. It seems a bright future in the premium sector. The company has already identified part of its market with the slogan “Less perspiration – Cruising in a suit.”