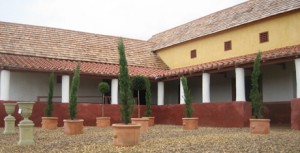 Finished villa, at Wroxeter, near Shrewsbury

The 2010 vintage Roman villa built at Wroxeter Roman City in Shropshire, whose construction was featured in Channel 4‘s ‘Rome Wasn’t Built in a Day’ TV series, is now open to the public.

A team of seven builders mastered traditional Roman methods to construct the villa, largely by hand, to a ferocious six months deadline. They worked under the direction of Professor Dai Morgan Evans, visiting professor in archaeology at Chester University, who conceived the project and designed the building. It was based on an actual building excavated at Wroxeter, or Viroconium in Roman times.

The original plan had been for them to build the Roman villa urbana – a high status Roman town house – use only genuine Roman techniques. The builders, with no experience of traditional techniques.

consulted a 2000 year old manual on Roman building written by engineer Vitruvius. In the event, with the prospect of work overrunning, they were forced to take shortcuts, principally using machine-cut roof trusses, to get the building finished before the winter. “I reckon we got it about 80% right,” siad Professor Evans.

However people who watched ‘Rome Wasn’t Built in a Day’, which followed the men through the project, will have seen for themselves the huge amount of non-mechanised toil they put into the project, mixing by hand huge amounts of lime mortar and plaster.

Building  blocks had been hewn from the raw sandstone, and carried on site by hand because of Prof Evans‘  injunction against the use of wheelbarrows. He insisted the conveyance have not developed  then, and its earliest recorded appearance was several centuries later.

Interior decorations included frescoes and  mosaics, designed and  executed by the workmen themselves.  They also followed Roman tradition by  working lucky phallic symbols Into the brickwork. The completed Villa, painted bright yellow and red,  is now a conspicuous landmark  over the  flat Shropshire fields. In the care of English Heritage, it can be visited from March to October (10am – 5pm).