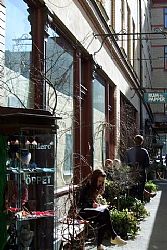 Find a cafe, order a drink and take the Gothenburg challenge – to eat a giant cinnamon bun.

This clean, green city on Sweden’s western shore (Goteborg in Swedish) is a comfortable introduction to Scandinavia. I took a short break and made a list of things to see and do. There are canals not so unlike Amsterdam’s, monster cinnamon buns, the world’s most exciting young orchestra conductor, bags of Swedish style, and taxi drivers who speak perfect English.

If you want to test how comfortable a green future might be, walk down Avenyn, the wide central boulevard in Gothenburg, where the city”s swish blue and white trams and the world’s largest biogas-fuelled fleet of buses have muscled out the car, unless it’s the ubiquitous Volvo taxi. (And in 2015 the city begins to introduce all electric buses running on renewable energy.)

The Gothenburg City Card (available as a physical card or digitally in your smartphone, SEK 395 for 48 hours) gives you unlimited use of trams and buses, as well as entry to museums such as the Science and Discovery Centre, Museum of World Culture and the Liseberg, Scandinavia’s biggest amusement park.

I took a city circuit using the tram and the harbour ferry (included in the pass) joining up the many big green spaces. One tram runs (half an hour) direct to the ferry to the islands. The city knows them as the two Archipelagos – the Northern and the Southern. Here the city website describes one of the quieter islands:

“On Grötö in the northern archipelago there are only about 100 residents year round, which makes this the island of tranquility. There are no cars and to get to the island you go first to Björkö and then hop on the ferry from there.”

Gustavo Dudamel, product of the progressive Venezuelan music education programme, has wowed the BBC Proms with the country’s brilliant Simón Bolívar Youth Orchestra. The musical phenomenon became Principal Conductor for the Gothenburg Symphony Orchestra in 2007 and is currently its Honorary Conductor. Refer to the orchestra’s website to see when they next give a free open-air performance for 20,000 in Slottsskogen park. In 2007 Dudamel was listed in the Time 100 – the most influential people in the world – by Time Magazine, and in 2010 he was named Gothenburg Citizen of the Year by the city’s leading media outlets.

There”s more marvellous music in the Gothenburg Opera House, a striking building on the harbour-front, which opened in 1994. Upcoming performances (2013) include Britten’s Billy Budd and Donizetti’s L’elisir d’amore. www.opera.se www.gso.se

On Friday evenings many bars serve free food when you buy a drink. And in another customer-friendly gesture cafés provide a blanket on every seat outside in cold weather, to save on high-energy patio heaters. Café culture is rich in this city – try Sweden’s largest (home made) cinnamon buns, kanelbullar, at Kafé Husaren. (“Fika” means having a coffee and cake – a vital pause in the Swedish day.) There’s an abundance of bright dining here too. Gothenburg was named Culinary Capital of Sweden for 2012 by the rural government ministry.

I enjoyed a one course lunch in a café in the fish market Feskekorka, and dinner in the stylish (bright red seats) and friendly (as most Swedish people are) Familjen Restaurant.

The Familjen website speaks of a “extension of a living room…you, as a guest, are part of our family.” They served good, rustic no-fuss fare from local ingredients – carrot soup, chives, ginger and corn-fed chicken, with a main of wild boar (slow cooked overnight), pureed turnips and brown butter, wafer thin cabbage and loganberry gravy. 7 Arkivgatan, 004631 20 79 79. www.restaurangfamiljen.se

Then visit the Röhsska Museum of Fashion and Design, to understand why style seems to run in the Swedish genes. This is on the Kungsportsavenyn, known to locals as “Avenyn” (or “the Avenue”).

At one end is the city’s art museum, Goteborgs Konstmuseum (Gotaplatsen). As well as a good collection of Nordic art it also houses the Hasselblad Center, displaying photos, and not necessarily by that namesake camera, the only one to have been left on the surface of the moon.

The corridor leading to my room in the Avalon Hotel meandered like a British country lane – no, I had not taken too much schnapps. It was lined with a border of synthetic grass. This new hotel’s designers cut down on straight lines as part of their serenity drive, in a successful bid for feng shui certification. My room had a warm and happy décor of light green, red and cream.

Avalon’s philosophy developed out of a world visit the founders made in 2004 to find out the best examples of the “good” hotel, and that includes service. Classy details here include designer furniture, sleek oak walls, travertine stone floors and rain dance shower. And handmade chocolates with my cup of (apparently very efficacious) white tea.

The bathtub jutting into the room doubled as a mini-spa. (The more energetic can book a room with a mini gym.) This city centre hotel – Best City Building of 2008 – is close to the shops as well as the Rose Garden, in one of the best preserved 19th century parks in Europe, and the Museum of Art.