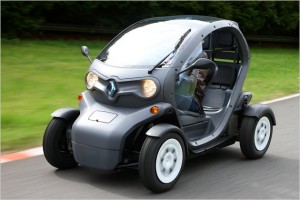 The Renault Twizy. Small and fun.

We often see new cars advertised against the background of a beauty spot, the implication being that you have the freedom of such wonderful places if you buy that particular model.

It is a spurious and somewhat insincere message if, like most people, you live in a town or city and must drive many miles on congested roads to reach that idyllic location.

There’s another contradiction. Conventional cars emit harmful exhaust fumes and CO2, and contribute to global warming.  Do they really have a place in landscape of great beauty and pure air, which is likely to be altered by climate change?

If there is a vehicle that qualifies for this sort of promotion, pictured in a beautiful national park, it’s the electric car.  Virtuous but still not popular, this surely is the right vehicle in the right place.

A fleet of Renault Twizy electric cars is now available for hire in the 1000-year-old New Forest (March 2013). The cars will be supported by a network of free-to-use charge points.

The New Forest follows the Brecon Beacons National Park, which introduced a number of Twizy electric vehicles for hire by visitors to the scenic area in 2012 (see below).

The compact and small-scale New Forest is launching the two-seater cars as a way to make the experience genuinely green for visitors, as they explore this ancient and venerable landscape.

The driving experience can’t yet be called genuinely green, i.e. zero carbon, until the cars are recharged with electricity from renewables. However experts agree that electric cars, unless they take their power from the dirtiest coal power stations, are cleaner than conventional cars. They do not emit pollution from a tailpipe.  And they are quiet.  Both of these are welcome features in a national park.

The take-up of electric cars has been slow, since the first model, the Nissan Leaf, was introduced in Spring 2011. Buyers have held off due in part to the high cost of electric cars, with many priced at well over over £20,000 even with a government subsidy.

Then there are concerns over “range anxiety”, drivers’ fear that the battery will be depleted before they reach the next charging point. There’s no danger of this in the New  Forest. On a day’s hiring, the car’s 62 mile range in itself should be adequate for a day’s sightseeing.

Then there’s the added security of a network of free charging points at hotels, B&Bs, holiday parks and attractions. Six of the 20 charge points are at Fullers pubs. Presumably at least some will be “fast chargers”, capable of  replenishing the battery in 30 minutes or so. The charging points are also available to people visiting the national park, the UK’s first  tourist destination with such a comprehensive charge point network, in their own electric vehicles.

The cars, which reach a top speed of 50mph, are for hire just outside Brockenhurst railway station, from the New Forest Twizy Hire Centre.  The daily rate is £49.  While it’s possible to rent a conventional car for a day for less money, when you book a Twizy you don’t have to pay for fuel.

The Twizy rental package comes with a “Brand New Forest Card”, which offers discounts at pubs, restaurants and  other attractions.

A spokesperson for the Park said the electric car scheme put it at the “forefront of UK tourism…one of the country’s top destinations leading the way in sustainable development.” The New Forest was already making a virtue of cycling, offering 150 miles of car-free cycles paths.

As for renting a Twizy in the Brecon Beacons, accommodation businesses will be able to lease vehicles and rent them out to guests. As part of the initiative, 20 informal charge points for electric vehicles have been set up in pubs, cafes and visitor attractions around the National Park.

For more information on the New Forest, www.thenewforest.co.uk