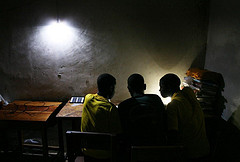 If the mobile phone had developed at the same rate as the principal means of lighting used across underdeveloped Africa and the Far East, we would still be using the brick size version that came out in the early 1990s.

Smaller, lighter and more efficient phones would still be an awfully long way away. In fact there would have been no point bothering to develop one, because weren’t the heavy, brick-like versions serving their purpose? They worked, so  wasn’t that enough?

The mobile phone, as we know, did develop, into a multifunctional high-powered miniature computer, performance center, camera and navigation aid, which also takes calls. Meanwhile the kerosene, or paraffin, lamp, which provides a dirty, smelly, stuttering and polluting light to so many millions of poor households, has scarcely advanced from the model first conceived in the 1800s.

It needn’t be like this, and British charity SolarAid is determined that it shouldn’t be. SolarAid has started to sell a range of simple lights, charged from the sun, in four countries in East Africa. The rate of sales is increasing at such a bewildering rate that we should take seriously the charity’s pledge to eradicate kerosene lamps across Africa by 2020.

The most basic model, costing around $10, provides four hours of good, bright light from a charge, enough to considerably extend a child’s homework time at home in the evening.

And if it wasn’t enough to give light to let people read and work and run businesses at home, and remove polluting fumes that make people ill, doing away with kerosene will remove a significant contributor to climate change, according to a new report.

For many years the kerosene, or paraffin lamp, essentially a 19th-century technology, has served millions of people as their only means of light after dark. And there’s a lot of dark in Africa. Night, when it falls not much after 6 PM, arrives very quickly, particularly around the equator.

The doner countries and agencies in the West have, understandably, looked past replacing  this antique – and expensive –  means of lighting, and set themselves the priority of eradicating disease and poverty in Africa. For the past 20 years combating AIDS has been another urgent challenge.

SolarAid began the daunting task of  bringing clean, free light to 60 million African households in 2011. It sends teams to villages in four East African countries, Kenya, Tanzania, Malawi and Zambia. The charity, founded in 2006 by solar installer Solarcentury, doesn’t use the questionable model of giving things away. Instead it sells the lamps to the villages for a reasonable price, which does not include the cost of procurement and distribution. By the end of March 2013, SolarAid’s business arm Sunny Money expects sales of the lamps to hit 320,000, nearly 600% up on last year’s figure.

There are four types of light. The most basic one, after charging in the sun during the day, gives off four hours of light at night. The  two  biggest models provide enough light to, respectively,  illuminate a family room and  light a classroom. The solar panels they come with produce enough additional power to charge mobile phones, the main form of communication, and way of running domestic and business finances for many people.

SolarAid says the $10 lights could pay for themselves within five months. There are already reports of  children doing an hour and more  additional homework each evening, and teachers noticing improvements in pupils’ performance.

Kerosene is a combustible hydrocarbon liquid. The kerosene, or paraffin, lamp , if it is to go, would not be missed.  It was first developed in the mid 1800s, and hasn’t changed much. It has a wick or mantle as light source, protected by a glass chimney or globe. Kerosene lamps consume an estimated 77 billion litres per year, equivalent to 1.3 million barrels of oil per day.

Researchers are now drawing attention both to the  effect of kerosene fumes on peoples’ health, and their contribution to  global warming.  A study (*) published in December 2012 suggests that replacing kerosene lamps could have an impact in slowing the earth’s warming trend.

It notes that incomplete combustion of the lamp fuel often yields black carbon that absorbs light, thereby heating the atmosphere. The study shows that 3 percent of global black carbon emissions come from these inefficient kerosene lamps.

“There are no magic bullets that will solve all of our greenhouse gas problems, but replacing kerosene lamps is low-hanging fruit,” said Kirk Smith, director of the Global Health and Environment Program at the University of California (UC), Berkeley.  “We don’t have many examples of that in the climate world.”

Another possible CO2-free and inexpensive  replacement for the kerosene lamps is the GravityLight,  which London-based designers Martin Riddiford and Jim Reeves are developing. (Deciwatt.org.) The GravityLight is hung from the ceiling and attached with a weighted sack full of earth, rocks or sand. As the sack descends slowly to the floor, energy is created – and for every time the weight drops, 30 minutes of light is produced. It only takes a few seconds to raise the weight again and create more light. The pair say such a light could pay for  itself within five months.