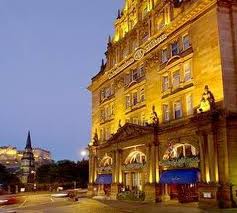 The Caledonian, Edinburgh. A bright new future for a grand old railway hotel?

Are we entering a new age of the great railway hotel?

The Renaissance St Pancras, in London, which opened in 2011, set a very high standard.  And another restored hotel in the capital, the new Andaz Liverpool Street, is another impressive reminder of the days when all the major train companies kept a hotel of prestige and distinction just outside their big railway stations.

The latest addition to this elite list is the impressive Caledonian Hotel  in Edinburgh, with window-filling views of the imposing castle on the rock, which opened in September, 2012  after a  £24 million renovation.

The hotel, part of Waldorf Astoria’s portfolio of landmark properties in leading destinations across the globe, stands in the heart of the city, just above the site of the former Princes Street station, which used to be at the end of the line from Euston to Edinburgh.

When it was opened in 1903, the 205-bedroom hotel, a powerful presence in red sandstone at the west end of Princes Street, finished to a standard of  considerable opulence  inside, was considered a match for any comparable establishment in the world.

For its 21st-century reincarnation, the designers took their inspiration from the glamorous golden age of rail throughout the public spaces. Inappropriate additions in the reception area and lobby were stripped away, and the space was taken back to its original glory, to convey a grand sense of arrival.

A vast staircase, the sort of place where ladies, and gentlemen, particularly those wearing a kilt, may make memorable entrances, rises out of marble floors and sweeps up under a scintillating chandelier of fine amber and crystal droplets dusted with gold.

There are affectionate references to railways and stations; for example bespoke luggage inspires the furniture, all luxury leathers, bronze metalwork, dusted gold and warm rosewood joinery.

The Peacock Alley, an informal resting point for afternoon tea and cocktails, repeats the glamorous style of the original Waldorf Astoria New York, whose Peacock Alley has been a gathering point for high society since it opened in 1931.

It’s fitting that the hotel reconnects with its great railway past. The Caledonian stood above the former Caledonian Railways Princes Street station, terminus for the original train service from London, on the route from Euston station. Passengers would pass under three archways in the hotel  and walk directly onto the platforms. For a time hot water in the hotel was heated using recycled steam drawn directly from engines in the stations.

When Britain’s railways were nationalized in 1948, it made sense to concentrate rail services in Edinburgh on one station. The choice was the nearby Waverley, end of the line for the one time rival trains from London King’s Cross, even though Princes Street station’s street-level entrance was more convenient for travellers than that of Waverley, which is at the bottom of a deep cutting. That was a big win for the rival railway hotel, the North British,  now the Balmoral Hotel at the other end of  Princes Street.

Princes Street station was closed in 1965 and demolished in 1970. Only the hotel remains as a memory of those great railway days, at least at that end of Princes Street.

In 2000, the Caledonian became the second Waldorf Astoria in  Britain, after the London Syon Park. The latest restoration and renovation has elevated it to a level of  rare magnificence. General manager Willy Blattner said he wanted it to be regarded as the first hotel in Scotland.

Michelin-starred brothers Chris and Jeff Galvin oversee the hotel’s cuisine. The other new restaurant, the Pompadour by Galvin features classical French-inspired dishes. The menu makes a virtue of locally-sourced seasonal Scottish ingredients, in traditional Scottish and English dishes. There is more than a glance to the past, too, in the Caley Bar, given a full make-over.  The drinks list features classic original cocktails including the signature “1903”.

The hotel’s newest facility is the UK’s first Guerlain Spa, which opened in January (2013).  “The treatment menu at the Guerlain spa will reflect luxury, emotion and refinement,” noted a press release, “with a collection of indulgent treatments created using Guerlain products and respecting the origins of the signature massage, dating back to when the brand opened its first ‘Institut de Beauté’ in Paris in 1939.”

Those in search of simpler, ambulatory, therapy  might just want to walk out of the hotel and down into Princes Street Gardens. There is rewarding browsing in St Cuthbert’s churchyard where lie the remains of George Meikle Kemp, designer of the monument on Princes Street commemorating novelist Sir Walter Scott. Also buried here are John Napier, mathematician, astronomer, poet and inventor, Alexander Nasmyth, artist, architect, bridge designer and inventor, and essayistThomas De Quincey.

The transformed Caledonian should serve as a cornerstone for a proposed £2.2m campaign to “relaunch” Edinburgh city centre when the controversial tram system opens. Trams are due to run by summer 2014 from Edinburgh Airport to York Place.  The plan is to improve business for retailers who will have suffered six years of disruption during the building of the  lines.

The Essential Edinburgh group hopes the campaign will coincide with the unveiling of pedestrian schemes for city centre streets.