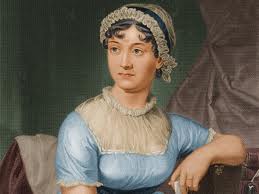 Jane Austen’s most popular novel, and, many might argue, the most perfect novel in the English language, Pride and Prejudice, was first published 200 years ago, on January 28th, 1813.

I wrote the following, after a recent visit to Derbyshire.

We are in deepest Derbyshire, climbing a steep rutted track lined with ancient trees. A dunnock wheezes a thin concerto. No hint of the 21st Century. Just the place for a stepping-out-of-the-Tardis moment.

So we picture a demure English lady writer, riding sedately downhill towards us. It is 1806. She pauses, glances forwards with a keen eye and, on the other side of the valley below, sees … Mr Darcy’s country seat.

We turn to share what might have been Jane Austen’s first view of the fictional Pemberley, the real Chatsworth House, basking gold in the sun, as vast as a palace. To be mistress here “might indeed be something,” thought Elizabeth Bennet in Pride and Prejudice, with wistful understatement.

Well, she was going to be, as soon as Darcy finished his swim. (Jane slips some convenient water into her scene-setting. We can see the decoratively widened Derwent – her “stream of some natural importance…swelled into greater.” But she didn’t mention wet shirts.)

The last big outbreak of Pride and Prejudice mania came in the film of this, one of the most popular novels in our language, starring Keira Knightley, Matthew MacFadyen and Dame Judi Dench. Expect to meet Austen addicts with their noses in the book wandering down this hill on the fortunately car-free track, nodding knowingly as the magnificent landscape falls into place.

Nobody knows for sure if Jane ever visited the putative inspiration for Darcy’s home. But if she did, I see her taking this same very old route the three miles over the hill from Bakewell. And why not Lizzy too? Bakewell was her last call before she meets her buttoned-up admirer at Pemberley on page 240. It’s the direct, and scenic, route, after all.

The Duke of Devonshire’s Chatsworth House was a star of the film. And so was the Peak Park scenery. But it’s more complicated than that. Take care when you research this treasured wedge of countryside using your DVD player rather than a travel book as a guide. Movies can deceive.

It’s a truth universally acknowledged in the film business that locations are never quite where you expect them to be. Prague often stands in for Paris. Romanian mountains masquerade as the Appalachians. It’s the same in the latest P&P. During the game they sub Chatsworth for a second “Pemberley”, Haddon Hall in the Duke of Rutland’s domain in the next valley along.

We planned our expedition into Derbyshire’s costume drama triangle over breakfast at our hotel, the 350 year old Peacock at Rowsley, freshly refurbished by the Haddon estate. When they took their prodigal hotel back in 2002, 50 years after they sold it, they fitted it with antique furniture from the family’s Belvoir Castle to celebrate.

Generations of artists and poets arriving by the London to Manchester railway and the A6 would have paused here to decide which of the two gilded valleys to set to verse or canvas – the Derwent on the right, or the Wye on the left. Like the film crew, we settled for both – with Chatsworth first.

This is the gentle centre of the Peak District, away from the highest moors. Rowsley sits under one of Jane’s typical hills, ”crowned with wood”, although she didn’t mention that the trees on this one were like a fine, Mohican hair cut.

Roads are busy around here, in this county fringed by cities. We escaped to the footpaths to check on Lizzie Bennet’s view of things. “Every disposition of the ground was good…she looked on the whole scene, the river, the trees scattered on its banks and the winding of the valley, as far as she could trace it, with delight.”

We slipped out of Rowsley, past little gritstone cottages and farmhouses, parallel to the river Derwent. A hare lolloped away in search of its next title fight. On the other side of the valley a pair of buzzards circled at a great height.

Chatsworth was busy. And the house wasn’t even open on our visit. But the hundreds milling around the garden centre shrank to just the two of us by the time we started the climb up to the site of our imaginary Austen encounter.

We passed an ancient road sign that seemed to predate all romantic fiction – a medieval finger pointed the ”Sheffield Rode” – and dropped down into the Wye valley, taking a seat on a convenient low branch for our picnic. “My, you’ve found a comfy spot,” remarked a couple toiling up the slope. They keep friendly footpaths around here.

You have to ring a bell before you cross the golf course. A party of golfers thanked us for waiting and not getting our heads in line with their mistimed shots. “Not that we played any better.”

It’s a pleasant stroll down into Bakewell, one of those places, along with Caerphilly, that won world fame through a single food item. Big queues outside The Old Original Bakewell Pudding Shop suggested the sweet made by mistake is a bigger than ever draw. (In a moment of inspired incompetence a cook at the Rutland Arms – where Jane Austen may have stayed – is said to have spread egg on top of the jam.)
But Bakewell has a life beyond puddings (never say “tarts”), as the centre of the Peak Park, with its fine bridge over the Wye, weir and water bird population explosion.

We set off along the river Wye, back towards Rowsley, on the third side of our triangle. Ladies in crinolines and men in Norfolk suits wore this path to the bedrock down the ages to see the splendid Haddon Hall, one of the last remaining 12th century fortified manor houses. The books rave in these terms: “a house trapped in time, hardly changed for over 400 years.”

A painting back at our hotel showed the aspect they had across the river meadows before a plantation of trees blocked the view. Recent storms had started the restoration of this view by tearing down several mighty specimens across our path.

Yes, you’ve seen it in the movies. One location director took this walk and thought – “Perfect, the Vale of York.” That”s how Zeffirelli came here to film Jane Eyre in 1996. It was just right in 1999 for Elizabeth (Cate Blanchett, Joseph Fiennes and Lord Attenborough.) And now P&P.

So to the question at least half the film going public would have been asking – was there a wet shirt scene in the new film? I won’t spoil it if you haven’t seen it, but Darcy”s splashing about here would risk disturbing some famous fishing waters.

And offend that little orange chested bundle that snuck into the roots of a waterside tree just under my feet. As soon as we passed it launched itself in a zip of electric blue across the river. The kingfisher must be the greatest free show in British bird watching.

We took the high path above Haddon and picked up the still sooty track of the torn-up London to Manchester railway that once gave so many a great view of this valley. A grimy pigeon might have been the appropriate bird, but we were luckier.

A pair of grey wagtails flicked ahead of us. They belie their name by being half yellow. I always think of the letter the then untroubled Neville Chamberlain sent to The Times six days before Hitler took power, saying he had seen one in St James’s Park.

Back at the Peacock the décor summed up our walk in colour: they chose bright green for the grass of the Derbyshire hills, and white fur cushions to mirror the sheep. All very local. As were the ingredients chef Matthew Rushton used in the restaurant, maintaining his two AA rosettes . (Sadly, no Bakewell pudding.) But after a day of locations being shuffled like a pack of antique cards it was fitting that we sat down to eat under a moody, full sized picture of … Havana.