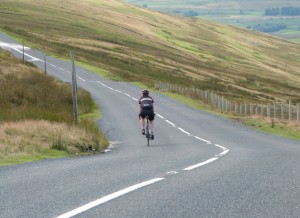 Around 2.21 on Saturday, July 5 this year (2014) the first of the riders in the first stage of the Tour de France will pass down through Buttertubs Pass in Yorkshire, picturesquely renamed Côte de Buttertubs for the purpose, and will then bear east along Swaledale, through Muker and on to Reeth.

It will be the most northerly reach of the 190 km stage, which begins in Leeds and ends in Harrogate. The riders will speed noiselessly through 14 km  of Upper Swaledale in about 19 minutes, during which time the scenic delights of one of the quietest of the Yorkshire Dales will be broadcast to the world, before the riders and their supporting caravan climb south up Whipperdale Bank towards Grinton Moor,  also Gallicised for the day as Côte de Grinton Moor.

I spent a day exploring a few years ago and wrote the following.

Ever since the dedicated daytrippers of Leeds and Bradford have had the car, the Yorkshire Dales has been the place to go. It was nose to tail through Airedale, Wharfedale and Wensleydale. Only in Swaledale, at the very top, did the traffic thin out a bit. But since the 1970s another force has been at work in the remotest of Dales. The curse of the TV series location finder.

Whoever decided that the humped back bridge in Langthwaite was the perfect fit for the credits of All Creatures Great and Small, achieved at the slam of the clapperboard what was beyond the sharpest minds in tourism promotion. Week by week that image was a beckoning finger to half the armchairs of Britain. And yet, 30 years on, if television has given Swaledale the occasional traffic jam, it has not entirely made off with its tucked-awayness.

At first map glance, this stumpy, richly-meadowed valley seems a more suitable location for Norwegian television than the BBC. Marske, Keld, Booze, Muker and Reeth come straight from the fjord: all are clipped variations of the Norse for clearance. Perhaps they reminded the Viking of home, marking his conquest of the dense woods under the raw acid moors and harsh limestone crags.

If you visit Swaledale by car, topography will be your route-master. The villages are spaced out like a string of beads on the road from Richmond. The one alternative to There and Back Again is to take the only available diversion, up and into the moors. And this, too, sounds like a chapter from Tolkein — Arkengarthdale. I reached Langthwaite, with its single, tight street and stone houses behind thickets of sweet peas.

How does a pub in a village small enough to fit inside a football pitch cope with world fame? With true Yorkshire reticence. I only knew I was in the Red Lion where the All Creatures cast used to drink when I noticed some old colour photographs on the wall, mostly of cameramen slumped among their gear against the local stonework, and fading dedications from luvvies I did not quite recognize.

Mrs Hutchinson, proprietor, took my order of vegetable bake, chocolate sponge cake and Black Sheep Bitter with an impassivity that I am sure would not have varied had I been Laurence Olivier himself. There was plenty of change from a five pound note. Then time was suspended as the susurrations of a discussion about the weekend’s fell race danced drowsily around the tiny bar, like aural shuttlecock.

I took the high road. As I slowed to a crawl to give way to yet another suicidal strut by a Swaledale ewe, its face blacked like a Dixie minstrel, I noticed the village of Whaw, so named, no doubt, in despair at the year-round Yorkshire winter hereabouts. I spotted two snowploughs (this was May), apparently on permanent standby.

As the road climbs higher, so familiar birdsong gives way to the occasional wail of a lapwing, and the eerie bubbling of the curlew. But it is for the lucrative red grouse shoots that this apparently forsaken heather waste is kept in shape, carefully burnt to produce a fresh flash of summer green. And so to the Tan Hill Inn, England’s highest pub at 1732 feet, and potentially the most crowded, since some liberally-minded JP gave the memorable order: Do not turn anybody away.

From here I free-wheeled back down into Swaledale. Keld distances itself ingeniously from the passing throng by requiring visitors to make a five point turn up the 250° junction. This traffic-calming-through-contortion makes for a village centre (whose incongruous chief feature is a chapel with a sundial) at peace with the car, quiet enough for street football.

In the valley bottom the River Swale was a quiescent dribble in a mighty rocky channel. For six watery months it gouges and scours (all the bridges have a spare arch to accommodate the deluge), then it behaves itself for the tourists. A pair of sandpipers zipped between boulders on rapid wings.

Muker is a major crossroads. Wainwright’s Coast-To-Coast Path, which runs the length of the valley, hits the Pennine Way here, the footpath equivalent of the M4 / M5 junction. I sat outside the Tea Shop, a stop on the Teapot Trail, while hardened walkers plodded past in haughty disdain for such foppish comforts. It was their loss. My scone was kneaded in heaven. My mug depicted the hunt – hunters and dogs searching on the outside, the fox hidden within. A Yorkshire joke?

I drove back through perfumes at war, wild garlic battling with bluebells. The valley became ever more sumptuously wooded, and delivered me up into Richmond, proud and spacious and lavishly cobbled.