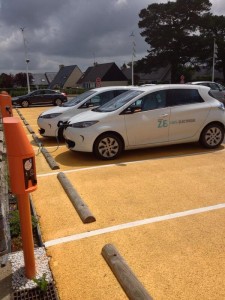 It’s hard to miss the big green statement the E. Leclerc retail chain is making when you visit its hypermarket at Pont l’Abbé in Brittany, France.

Photovoltaic panel lamps stand tall and prominent over the car park, in the centre of which is a double row of electric vehicle charging points, with, on our visit, two all-electric Renault ZOE vehicles hooked up and replenishing their batteries.

Leclerc, the Tesco or Sainsbury of France – it’s described as the country’s biggest retailer, with 560 stores –, has made a bold start to familiarise its customers with the concept of electric cars (EVs). The Pont l’Abbé outlet owns 10  all-electric Renault ZOEs. There are 11 charging stations, each with two sockets.

Leclerc has teamed up with Renault to form the Z.E. Club des 50. The initiative was launched in 2013. 20 of the chain’s stores have installed EV charging stations for staff and customers. Pont l’Abbé was the first to take delivery of the ZOE, provided by the local Renault dealership in Quimper. They will be used by employees who have wall boxes for home charging. They may also top up their batteries while at work.

The plan is for Leclerc outlets to team up with Renault’s 500-strong dealership network across the country. In each region, a Leclerc centre and a Renault dealership work together to deploy charging stations. Leclerc and the Renault dealers will stage regular presentations and other initiatives to raise awareness about the benefits of electric vehicles.

Commercially it must be a gamble, because those charging points take up spaces that could be allocated to customers. (They can also be used by electric car-driving customers, who may charge their vehicles there for nothing.)

This practical reason alone might dissuade our big supermarket chains from trying this sort of initiative. Few of the tightly constrained urban supermarkets I know would be able to spare the space. Besides, would drivers of fossil fuel cars keep them clear?

It’s hard to see, yet, a British chain emulating Leclerc and investing in electric cars and charging facilities, even if it had the space. Competition is severe at the moment, although there is a Lidl supermarket not 5 miles away from Pont l’Abbé, so Leclerc is under similar commercial pressure. Perhaps it’s easier in France for a national supermarket chain to team up with a French car maker. But a more likely reason is that one committed person at the top wanted it to happen.

The ZOE is a pure electric supermini aimed at business and private owners. It has a top speed of 135km/h and a range of more than 20k0ms. It costs  €13,700 incl. VAT (price in France, after deduction of the tax incentive).