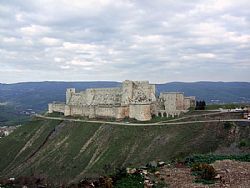 Ten years ago, in March 2011, peaceful protests against President Bashar Assad’s government began in Syria. Before long a popular uprising turned into full-blown civil war, and unspeakable violence against civilians.  In 2021 Syria is economically devastated and divided, its populations dispersed and desperate, but Assad remains firmly in control.

I visited Syria in its last months of peace. Few could have imagined the devastation to come.

This was the piece I posted in February  2011. I post it again as a reminder that this was once a normal country. I hope it will become one again.

We stood on the high, haughty ramparts of Crac des Chevaliers. The rest of the group had disappeared behind a turret, leaving us quite alone. It was easy to imagine ourselves back to 1220, when the King of the Crusader castles repelled all comers.

Looking down from here Richard the Lionheart, King Andrew II of Hungary and the other adventurer monarchs from Europe must have felt so smug. This mighty citadel was guaranteed to hold out against a five-year siege. It never was taken by force, and is awesome as it ever was.

Crac, in modern day Syria, is one of those epic names with built-in thrill that sit high on the wish list of questing travellers. It may have entered the British subconscious because it was the model for the classic mediaeval castles we know so well in Britain. Edward I saw it, and told his engineers to build something similar when he wrapped his ring of power around Wales.

Long before his flowing headdress and desert heroics, the future Lawrence of Arabia visited. The young T.E. Lawrence was touring the Middle East, drawing and recording Crusader castles for his university studies. He declared Crac (a modification of the Arab word for citadel), with its 13 massive towers on thunderous walls atop a peak a few miles from the Mediterranean, “undoubtedly the most impressive fortress in the world.”

This symbol of might and intimidation stands for something more. It’s a prime example of the places we are forced to miss when politics erects roadblocks in the path of travellers who, unlike the Crusaders, comes in peace. And Dubya was the final straw.

Just when we thought it might be safe to come out from behind the sofa and visit Syria, President George W. Bush put it on his “axis of evil” list in 2005. Even now our own Foreign Office imparts on its website the sort of advice an anxious mum might give a child on its first day at school: “Take care to avoid demonstrations, which can turn hostile.” On that basis, avoid any UK football club where the fans want the chairman out.

In the end the rational tourist in us concluded that life is too short to deny ourselves a visit to this wide land of ancient cities, fabulous desert ruins, Roman arches, Ottoman palaces, magnificent mosques and tables spread for a feast, in the face of a threat level not unlike the one I face crossing my local high street in the rush-hour.

There is another reason we took the plunge, apart from the certainty that we wouldn’t risk meeting Dubya in our hotel bar late at night. The fact that Saga, and other prestige tour companies, now lead tours there is a sure sign that Syria was safe enough for us not to pack full body armour.

In the event our biggest problem was finding a working ATM in Damascus, already being touted as the new Marrakesh by the New York Times. We spotted a nice new one in the most happening road in the city, “the Street called Straight,” as the King James Bible records it, opposite one of the interesting new properties that are peppering the Old City. Once rundown 18th-century houses are being tastefully converted into boutique hotels, with secluded courtyards and rooftop terraces.

Saga had kindly let us dip into one of their eight day tours. We felt like pioneers. Few of our fellow seasoned travelers had been to Syria before. So there was a genuine sense of discovery as we came upon unfamiliar places. The staff who greet you in the bigger hotels still have that “just out of tourism school ” feel about them, stiffly following the textbook. But we didn’t experience a single second of friction with local people. And the food was outstanding.

in Syria you could easily become a vegetarian without noticing it. Simply stay on the endless first courses, creative combinations of beans and lentils, cucumber and yogurt, aubergine, zucchini and beetroot, served with spices – mint, olive oil and cumin.

Soaring, literally, above all other Syrian restaurants was the wonderful Al-Kala’a, set on an adjoining, and higher, hill to Crac. It is the perfect place to  photograph the castle. Our host was warmly welcoming and furiously solicitous, as he set down second helpings of the main course, local chicken cooked in lemon and garlic.

We had flown in to Damascus, the world’s continuously occupied city. The centre is drab and monochrome, built in the heavy-handed Socialist era from the 1950s onwards, but studded with the most brilliant Technicolor details.

The enormous 8th Century Umayyad Mosque was one of the marvels of the world when it was finished in 715 AD. We padded around in our socks over a vast marble courtyard under towering minarets. The walls contain heavy limestone blocks from the original Roman temple dedicated to Jupiter.

Inside we walked on a sumptuous ocean of carpet, under fine mosaics, and windows in vivid primary colours. In an admirable display of religious tolerance, the mosque contains a Christian holy place, the Shrine of the Head of St John Baptist.

In Damascus’s enormous Hamadiyeh Souk, we browsed under a 500 yard long arching metal roof pockmarked with bullets from a 1920s gunfight in the French mandate, and bought some of the famous Syrian saffron.

They say the city of Aleppo has the best souk, but for us nothing beats the one in the small city of Homs, a good base for visits to Crak. Avril and I wandered there one free afternoon. They probably haven’t seen a tourist since Lawrence was in these parts.

Visit the indoor market in a tourist town in, say, Turkey and traders bombard you with the banter they learned from watching East Enders. Remote from the tourist throng, we didn’t see a single word that wasn’t in Arabic. We strolled for ages down labyrinthine alleyways, past stalls and shops selling spices, nuts, wooden spoons, gold, organic honey, olive soap, meat, perfume and a very Syrian specialty, racy ladies’ underwear. Nobody tried to sell us carpets or T-shirts. It was a totally authentic traveller’s experience.

No time for the ancient Roman city of Bosra, and the Church of St Simeon Stylites near Aleppo. It’s dedicated to that survivor from the early Christian era who dodged the common throng by living for 32 years atop a 60 feet high column. And the 700 “forgotten” towns and villages around Aleppo. They entered a fairytale slumber 1300 years ago, when their inhabitants left to find a better life.

But, after Crac, there was one place we could not miss. We came upon the ruined city of Palmyra after a long drive over the desert, its golden stones bursting suddenly into view, etched against a cold, cobalt sky. 2000 years ago this oasis city at the crossroads of civilizations grew fabulously rich, commanding the caravan routes to all points of the compass. After a brief flowering, it slumbered under the sand until rediscovery in the 1800s. Immense ruins have been revealed,  and the digging continues.

Palmyrans were a distinct and very handsome people, if we are to believe the many funeral effigies displayed in the museum. The city was famous for its remarkable womenfolk, celebrated in many statues . Finest of all is the fiery and dazzling Queen Zenobia, a movie subject in waiting. She was Palmyra’s last leader before it fell. Could she become the symbol of Syria’s new age of tourism?