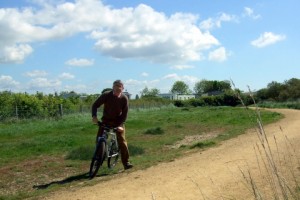 Come to France - for a saddle soar. Photo by the writer

Just 25 miles from England the instruction ‘on yer bike’ – or local equivalent – is a form of welcome rather than a variation on ‘get lost’.

Cycling in France is an invitation to adventure, and it starts at the portals of the Channel Tunnel.

The Nord Pas-de-Calais tourist people have stared wistfully – and for long enough – at the British speeding past down the autoroutes.

Now, with Eurotunnel, they offer an ecofriendly way of serving up the French experience.

Leave your car in Folkestone. Cross the Channel with (not by) bike. Pedal away for a day along the overlooked Cote d’Opale (the best part is the 30 miles between Calais and Boulogne).

I crossed the Channel on Le Shuttle with my son’s mountain bike. The Eurotunnel minibus driver who picked me up at Folkestone said I was the only one that day – normally his vehicle was full of cyclists.

With my bike strapped on the trailer, we emerged from the tunnel in 35 minutes and I was driven round to the Eurotunnel terminal at Coquelles, with instructions to be back at 6pm sharp.

Ahead were six of the cheapest hours I had ever spent in Europe – the day return trip cost less than £30.

As my driver departed, I experienced those first uncertain moments of being alone in a foreign country – without a puncture repair kit. I would simply  have to trust the perfect surface of the French roads.

The tourist board has assembled four circular scenic cycle routes starting within an hour or so of the terminal.

One, passing Cap Gris Nez, where cross-Channel swimmers struggle ashore, caught my eye – until I noticed it included hills described as ‘not for the fainthearted’.

I chose instead La Colonne Blanchard route, about seven miles inland, which promised a gourmet restaurant and a woodland assault course.

Leaving Calais, I was almost immediately on a drowsy road with scarcely a car in sight, serenaded by yellowhammers and dodging the water bazookas that irrigate fields here.

First stop was the little town of Guines, where Henry VIII took on Francois I of France in the unofficial world power-dressing championship at the Field of the Cloth of Gold in 1520.

It was Friday lunchtime. The long weekend, based on France’s 35-hour week, starts here.

Everything was shut, except La Ferme Gourmande restaurant, where the walls were festooned with awards.

This was France, so no maitre d’ fussed over my state of undress.

‘Table for one? Certainly, Monsieur.’ The meal cost no more than I pay in my local pizzeria.

My three-and-a-half-hour circuit began here. Had my dining been wise? Le Tour riders eat a big breakfast, but don’t have a postlunch drag up into Guines Forest to contend with.

At the top I felt like a qualifier for Le Tour’s King of the Mountains jersey. I had scaled the first hill in France.

One headstone bears the heart-rendingly cheery rebuke to fate: ‘I died in a Spit, doing my bit. Happy landings!’

My route took me through quiet villages like Fiennes, where the castle was trashed by Henry VIII’s troops, and Boursin, with its derelict features like a crumbling barn disguised with cascades of flowers.

Boursin (the famed cheese is made in its namesake in Normandy) had a parting gift – the Route du Mont, which translates roughly as ‘Get off and push, sucker’.

My reward was yet more views over villages nestling in tranquil valleys that were English for 200 years.

Nearby is Mimoyecques, where the RAF took out the wartime V-3’s proposed launch site. You can still see the tunnels where the vast cannons were to be kept.

I swear you have more downhill freewheeling for your money in France, and a balmy afternoon unwound under my wheels.

Monsieur Michelin had been my guide, his tyres my saviour.

Eventually the Calais Town Hall tower hove into view, and I drifted downhill into the terminal.