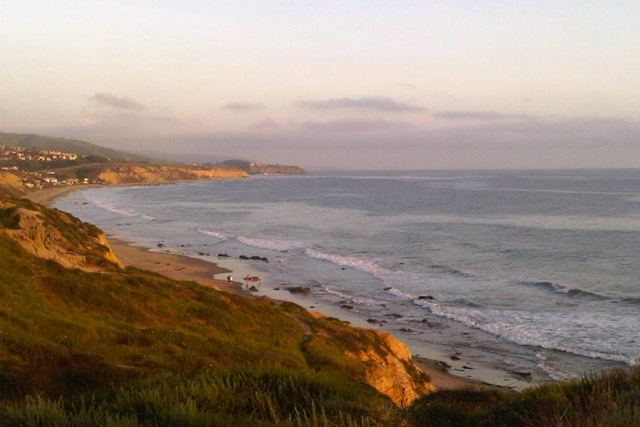 Californian conservation triumph. Nobody is building on this billion-dollar coast, saved for the nation.

I wrote this article in 2012. Since then, because of the climate crisis, I have decided to fly as infrequently as possible – two flights since the start of 2020. It is ridiculous to expect people to give up flying altogether. But if many people resolved to fly less, that would help. In the meantime people want to be informed, and to read about places even if they don’t intend to  travel to them, or simply cannot. This is one from my archive of travel articles.

Newport Beach, a 45 minutes drive south of Los Angeles airport, has all the trappings of the Southern Californian “Good Life”. Many miles of stardust-sprinkled coast, but where watching the hummingbirds and whales costs nothing at all.

We stayed in Pelican Hill, built on a hill above the Pacific in the style of the Renaissance architect Palladio, with a sprinkling of casual Orange County elegance. It’s the sort of extravagant accommodation you expect to find on the Californian coast, carried off with high style and good taste.  Yet this city knows when to hold back too, and let nature express itself. Just a mile away is Crystal Cove, little changed since the original artist colony found it when they painted the shore, flooded with the setting sun, 100 years ago. That’s the range of Newport.

A shorter version of this article appeared in the Mail on Sunday, here.

Before I visited Los Angeles and the stardust-sprinkled Californian coast around it, I had certain preset images in my mind. I saw Hockney’s swimming pools, crowded freeways, bronzed and beautiful people prowling the seafront, Bentleys sweeping through gilded gates.

I assumed all the spare seashore was taken up years ago and smothered with multi-million dollar estates, where the only open land was a golf course. Nature, if there was any, was living a pampered life in a zoo. In short, this part of the Golden State was extravagant, comfortable but essentially sterile.

All partly true: Newport Beach in Orange County, a 45 minutes drive south of Los Angeles airport, is indeed a perfect example of the Southern Californian “Good Life”, and it does include all those features I list above. However it also offers memorable, and entirely free, meetings with nature. Such as this.

I was on the edge of the Back Bay estuary, half a mile in from the teeming Pacific Highway, the first, or last, stretch of the 22-mile Mountains to Sea trail. I managed to capture a hummingbird on my mobile phone camera. This is a key stop on the north-south migration route, with up to 35,000 birds dropping in. But hummingbirds live here full time. “Great. It stayed still for ya!” observed a lady passing on a bike. Forward? I think friendly, in the easy Californian way.

I’d spend part of our first morning on the other side of the inlet, while my wife was receiving an Amber Gold Massage in The Spa in Pelican Hill. The warm and engaging Noelle, an instructor at the Newport Aquatic Center, had almost persuaded me to climb aboard a SUP (stand up paddleboard). It’s simple: you stand up on a board, and paddle. Her pupils range from a group of children from poor backgrounds in the LA suburbs – they were preparing for their session around me – to American football stars. They even offer yoga lessons on a SUP.

Newport  Beach was already less exclusive, casual and affordable than I’d imagined. There are prosperous neighbourhoods, where people drive top of the range BMWs. The supermarket we visited mainly served, at high prices, the bounty of the state and premium delicatessen items from Europe, to people who look as if they didn’t need to compare prices.  But there are inexpensive places to eat, no-cost places to walk and bask in the sensational Pacific sunset, and some of the best, absolutely free, nature in the world I think it’s possible to see from a built-up area.

We were able to sample the sort of extravagant accommodation you expect to find on the Californian coast, although carried off with high style and good taste. Just as California imports wine, cuisine and sartorial style from Italy, why shouldn’t it bring in the sensuous lines of great Italian Renaissance architecture too?

When, in 2008, the owners decided to build a hotel on the hill above the Pacific in the noble style of Palladio, with a sprinkling of casual Orange County elegance, they determined to do the job properly. (In the interests of full disclosure, we stayed there as guests at the hotel, on a facility trip arranged by a London PR company.)

Pelican Hill doesn’t overwhelm. This is the antidote to the skyscraper hotel. Everything is low and wide, rather than imposing and high. Landscaped grounds stretch over the hills above the Pacific, planted with olive trees mature enough to produce oil, with two golf courses, wrapping around a palatial centre. 21st century indulgences include the perfectly circular “Coliseum” pool, and a replica Italian coffee shop with home-made pastries.

We stayed in a villa, under a ceiling as high as a Venetian church. It was grand and also thoughtful. I liked being able to set the gas-fired open fire to turn off an hour after we climbed into bed.

Our visit to the shore a mile away by the hotel’s courtesy electric buggy confirmed that the famous and fabulously wealthy have not claimed every spare inch of this gilded Pacific coast for their mansions by the sea.

We came to a fringe of original coastal greenery latticed with paths, with birds like the black phoebe in the sage scrub. (I saw one, had no idea what it was and looked it up: to the untutored British eye, unfamiliar American birds are quite exciting.) This is a state park. Down below the Crystal Cove has not changed much since the original artist colony found it when they painted the shore, flooded with the setting sun, 100 years ago. The early silents stars came here from nearby Hollywood too, and were filmed against the palm trees.

After lunch at the beach side Buccaneer Cafe we inspected the fishermen”s shacks, restored to prime 1935-1955 condition. The inshore waters are now a sea life reserve. The biggest wonder is the migrating gray whales, moving south in the autumn and north in the spring. Stands on the cliffs and it is possible to see them without binoculars, one of the best free wildlife sights on this continent.

We headed a mile or two north up the Pacific Coastal Highway, which cuts through Newport Beach, turned off and plunged instantly into an unreal transport calm. The electric Duffy Boats, dating from the dawn of the environment movement, have been a clean, green feature in the harbour since 1970.

With our guide Carolyn at the tiller, we pottered among the man-made islands in these quiet waters. Carolyn identified the most impressive homes and expensive yachts, and pointed out where John Wayne lived, and where Bogart feted Bacall on his yacht.

Some of the islands are entirely car-free. Prices are astronomical, but not all incomers are well off.  Sea lions have made this quite harbour their base. They haul themselves onto moored yachts, and have sunk craft with their bulk.

Breakfast at Wilma”s Patio on Balboa Island was a glorious way to start next day. We walked the brick sidewalk of Marine Avenue, and found the brisk and friendly family-run place among the arty clothes shops and galleries. (In 1975 Maurice and Wilma Staudinger came here searching for carpets for their house and bought a cafe instead.) Replete with pancakes, waffles, eggs and everything, and corn bread and honey, we drove to the ferry to the Peninsula. The five minute crossing is one of those rare passages of pure pause you get in life. On the Peninsula we walked along the Pacific edge, on one of the nation’s best urban sandy beaches, as battalions of pelicans lumbered overhead in single file.

On the one hand the US is in thrall to poor quality fast food. On the other people are launching businesses committed to wholesome food, using local, organic ingredients from sustainable sources. In the excellent wine bistro Rustica, local and inventive fare included spring vegetable ragout, English pea ravioli, artichoke barigoule, char-grilled asparagus, stuffed squash blossoms, and shaved raw asparagus.

True Foods has put the wholesome food claim into its name. Menu choices of our visit included black cod from Alaska, “sustainably harvested”; “hormone and antibiotic-free chicken, turkey and beef”, all simply served. Their house-made natural sodas and juices were sweetened with agave nectar or honey.

That’s very long way from the original Quarter-Pounder with Cheese, and soda.

Gareth Huw Davies stayed at Resort at Pelican Hill (pelicanhill. com). British Airways (0844 493 0758, ba.com) offers a seven-night fly-drive break to Los Angeles from £569 per person for travel between October 22 and December 14, 2012. Price includes return flights from Heathrow and Avis car hire for the duration. For further information, go to visitnewportbeach.com/uk.