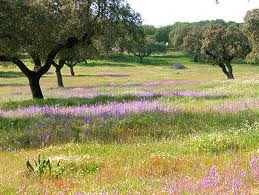 “If you want a lemon for your G and T, just go into the garden a pick one,” said Jenny. “But watch out for the nazgul!”

Actually she didn’t mention the nazgul as I set out in search of the pure citrus experience,  but maybe she should have.

Rare birds soar and flap and flit and serenade melodiously all day long on Monte da Contenda farm, in the far east of Portugal. But there was a disdainful star that looked down its beak on all of them when I visited.

We spotted this scaled-down photo-fit of the terror avian from Lord of the Rings when I arrived at the farm, 6km from the historic town of Camp Maior, on the outskirts of the São Mamede Natural Parque.

“Montague’s harrier; now that’s something. Don’t see many of those,” said Jenny as its big shadow slid ominously over the growing wheat.

In the end the only hazard as I twisted the prefect lemon off a tree (pledging never to touch another sprayed, waxed, artificially revived specimen) was swallows parting my hair as they zipped to and from their nests in the porch.

Fine fruit and malice on wings were a mere aperitif, however, to the main attraction. I inspected the proof, in photos on the kitchen walls, as Jenny served me slivers of cheese from their own sheep’s milk with my pre-dinner drink. “They like our farm, but the weather’s been funny and we have only spotted one this week.”  This would be tense. I only had two days. Would that be long enough to spot the feathered B52, heaviest flying bird in the world, the great bustard?

I had come to  one of the best places in Europe to find the great bustard wild in its natural habitat, among the Pyrenean oak, pine, sweet chestnut and olive groves of the Alentejo region in E. Portugal and the adjoining Estramadura region of W. Spain.

It’s a pity Immigration no longer asks “Reason for your visit?”  at EU airports, or our conversation might have gone like this.

“I’m here for a bird as big as a barrel, with a circle of tail feathers to impress a Red Indian chief. It’s a bird for the big parade. Its courtship routine is one of nature’s mega-events. It needs a wide stage, and there aren’t so many of those left in Europe now, except in your country.”

The Alentejo is easy to find. Leave Lisbon airport to the east, over the high and soaring Vasco da Gama Bridge, and head for two hours as the corvo flies on the motorway.

It was eerily quiet, as toll-dodging drivers took alternative routes. I settled back and took in the flat countryside slowly morphing into less-visited Portugal, the gentle landscape of rolling hills of the fertile Alentejo, with its wild peony and black pigs. Beyond, in the densely wooded granite peaks that border Spain, there was more medieval wildlife: wolves, boar and vultures.

I turned off at Elvas, a border town still faintly echoing with invasion, battles and occupation, by Romans, Moors, or feuding royal houses of Portugal. The Duke of Wellington had his headquarters here for his siege of Badajos, just over the border in Spain.

Close to the Wardles’ farm is Campo Major, where they look on the bright side ever since lightning blew up the dynamite-filled castle (now rebuilt) in 1732. Every September they celebrate another explosion-free year in a Festa, with parades and dancing in narrow streets festooned with paper flowers.

Pat and Jenny Wardle began farming their 555 acres with a light touch and sensitive hand in the 1970s.  Wildlife flourishes. They let out an apartment, with its own swimming pool, in their big rambling farm house and Jenny takes guest nature-spotting.

Those of limited avian ambition can enjoy the silky bantams, strutting comically about the farmyard in their little feathery “boots”, and the restful flappings around the dovecot. From the holiday cottages in outbuildings, guests have a perfect view of a pair of storks nesting atop a telegraph post. I found a couple viewing cetti’s warblers and stone curlews through a telescope. But no bustards.

Jenny was sure they were somewhere. “We treat them as part of the farm, proving bustards and  farmers can coexist. We planted sugar beet last year. Somebody said: `They won’t like that.’ But we sat in the hide some guest built and watched them walking up the rows picking out the new plants.”

Peter Eden called next day. Another “30 years in Portugal” veteran, he runs nature tours and lets out a holiday cottage. He knew exactly where to go. We drove along an empty, dead straight road for 10 miles through villages where the only action was men gossiping serenely in the squares.

He turned up a secret in every field.  Those bare, straggly trees among the yellow lupins? “That’s cork. Stripping bark for wine corks is 100% environmentally friendly, leaving the forest and its wildlife intact.

“Those very big bulls? Fighting bulls – but in the Portuguese ring they are not killed. They need massive fields – again, good for the environment.”

We stopped for the cheapest coffee in Europe, and Peter and his wife Rosemary chatted to locals in a tongue which has become fashionably seductive since those scenes in “Love Actually.”

Remember the line in the language school, when Colin Firth is learning? “There are many roundabouts in Milton Keynes.” Well the equivalent here is “There is only one set of traffic lights in Vila Fernando, and never any traffic waiting.”

We found a meadow just past the village, dotted with trees. The warm up artists, bee eaters and some black storks floating languorously by, did their turn. “This is tumbledown, only ploughed once every four years,” said Peter. “Very hopeful.”

It didn’t take long. I banished any thought of a “This is one I prepared earlier” set up. I was in the company of an expert.

I trained my binoculars. There could be no mistake. Even if your top bird skill is telling a sparrow from an eagle, believe me, you would know a bustard.  Tail feathers standing high, it strutted imperiously about its clearing like an opera singer commanding the stage; then a bonus – I saw the female it was courting. I felt like a settler in the Wild West first setting eyes on a turkey. It was a powerful moment.

Peter told me that local farmers receive EU money for implementing bustard-friendly practices, such as harvesting later to give chicks time to grow, and leaving field edges untilled to provide feed and nest sites. The result was a pleasing increase in bustard numbers, with the help of successful conservation programs run by the Portuguese Liga para a Proteçaõ da Natureza (LPN).

On cue a  farmer drove over in his tractor. He and Peter chatted. “He says: `Sure, it’s ok to walk around here.’ These people are proud of their bustards. They could do so much for tourism.”