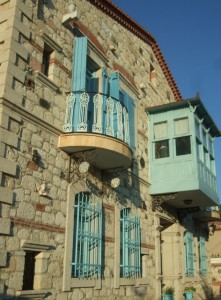 The Cesme Peninsula is one of the Turkish Aegean coast’s most stylish locations. This is the spit of land where the Silk Road from China used to end. For British tourists familiar with the mass tourism model of the big resorts, the small villages and towns here, with abundant small-scale accommodation, are an unexpected, and I should think welcome, surprise. There are elegant stone-built boutique hotels, smart shops, a wide choice of thermal spas and one of the world’s windsurfing centers. I spend a few days on the peninsula, where Turkey shows its sophisticated face.

In 2010 The New York Times included the Cesme Peninsula on its list of 30 top places in the world to visit. It is certainly a place set apart from mainstream, mass tourism Turkey. While most of the big Turkish resorts have been created, a product of cheap, package holiday tourism which started in the 1980s, the villages here draw their character from a sympathetic refurbishment of properties built in the 1800s.

On the evidence of my visits, the British have yet to discover the peninsula. I was there for three days and hardly heard English spoken, although it’s understood in shops and restaurants. Most visitors were better-off Turks, from cities such as Ankara and Istanbul, with a few French and Italians.

There are resorts all along the south and west coast, but this one has advantages. A natural form of air conditioning operates here.  This peninsula on the far west benefits, even in the summer’s fierce heat, from a breeze blowing pleasantly, and constantly, from the north. This wind powers turbines that replaced old stone windmills on the hills. Several of these have been turned into smart restaurants. Another point in the peninsula’s favour is its closeness, only 50 miles on a good dual carriageway, to Izmir Airport (served by budget flights from Britain).

This promotion of smaller, more select resorts is a sensible course for Turkish tourism to follow, with the focus on boutique hotels, many of them in restored old buildings, rather than yet more anonymous hotels.

The pretty little village of Alaçati is one of the best places to find this alternative to the abundant low-cost rooms of the big resorts. This is a destination created almost entirely in the 21st-century. 12 years ago much of it was run-down and neglected. The transformation has been sudden, and successful. Today there almost a hundred small hotels and B&Bs here. Many of them are in renovated  old stone houses, built originally by the Greek population in the late 1800s.

In the population exchanges that followed the conflicts of the early 1900s, the houses were taken over by refugee Muslims from the Balkans, and then by Turks. Today any one of them would qualify as a feature subject in a design magazine. They are all quite different, all competing hard through the colour of their paintwork, and the power of the flowers tumbling down old stone steps. They are set in narrow streets crammed with smart fashion and design shops and one-off restaurants and cafes.

I stayed at the Zeytin Konak, a group of four stone buildings on the edge of the town. Unusually there is a rather more space here, with room for a shaded garden and two swimming pools. The big event is breakfast, an exquisite experience in the relative cool of the early morning. They serve it on the shaded patio in the walled garden, with their own bread, pastry and jam, including watermelon rind jam. There is no restaurant attached, but they sustain you with their light snack specialities, such as manti (turkish ravioli), and icli kofte (bulgur balls filled with mince meat and walnut). Precisely when you need it, late afternoon after a busy day out, they serve home-made cakes. Nothing is too much trouble.

There are plenty of good places to eat out – I can recommend the Agrilia Restaurant in Alaçati – and there are some excellent, top end, fish restaurants around the little harbour of Dalyan. It’s worth exploring the waterside restaurants in the port of Cesme, where the Silk Road used to end. The town’s principal features are a long sandy beach and the 14th century Genoese fortress. This was restored and enlarged by the Ottomans in the 16th century.  One refreshing drink to ask for is the local speciality, a glass of minted lemonade, limonata.

The couple who run the boutique hotel where I stayed have both been Olympic windsurfers. They drove me along the coast, proudly showing me the shallow waters around Alaçati, now recognized as one of the best places on the planet for windsurfing, on a par with established resorts in the Canary Islands and Cape Verde.

This place owes its preeminence to balmy and predictable zephyrs that blow for over 300 days a year. These benign waters are good for beginners too. Surfers use a safe, wave-less, sand-bottomed bay where conditions are ideal, and forgiving, for novices. With the water so shallow, when you fall off it’s quicker to get back on the board again. There is a good choice of surfing schools.

This has all happened since the late 1990s. In 2004 the European windsurfing championships were held here, followed, in 2009, by the Professional Windsurfers’ World Cup.

I took the coach to Alaçati from the main bus station in Izmir – there’s a shuttle from the airport. Others will prefer to hire a car and venture out of the peninsula on day trips to nearby attractions. At the top of many people’s list will be the Graeco-Roman city of Ephesus, or Efes.

By any measure Ephesus is a fabulous place, the largest collection of Roman ruins in the eastern Mediterranean, the closest thing to Pompeii as a place of buried marvels still to be excavated – only an estimated 15-20% have been unearthed. But it does get extremely busy (and very hot). It is Turkey’s most-visited historic site, outside Hagia Sophia in Istanbul. You’d be wise to go as early as you can. Use the eastern entrance, then walk down the Marble Road, past the many highlights, such as the Library of Celsus and the amphitheatre, with seats for 25,000 or more. Be careful with your possessions. I had my wallet stolen at the gate.

Smaller, and far quieter sites, can be equally rewarding, particularly when you have to press your imagination into play. The 5000 year old settlement at Ildiri (ancient Erythrai, once one of the 12 Ionian cities of Asia Minor), is a seaside village on the peninsula. You’re free to wonder among the ruins, including city walls and an acropolis, and climb the steps of the ancient theatre, on a hill overlooking the Aegean, and the Greek island of Chios (an hour’s of ferry ride away from Cesme). There are Roman villas, mosaics and a Byzantine church. Statues, jewellery and other finds are on show in nearby Izmir Museum. Heading south, it’s an easy car rides to the ancient sites of Priene, Miletus, and Didyma.

I was surprised and delighted to find Izmir, less than an hour away to the north, crowd-free in the first week of August. I spent a lazy time browsing the broad boulevards, walking the elegant seafront and riding a century-old cliff face elevator.

There’s a link between original Izmir, then called Smyrna, and William Shakespeare. The bard gave Hippolyta, Queen of the Amazons, a key role in Midsummer Night’s Dream. Smyrna is one of the cities Hippolyta’s Amazons are said to have founded. Alexander the Great built up the city and the Romans finished the job. It’s worth a visit to the Roman and Greek remains, the Agora. Go early morning or late afternoon to avoid the heat, and walk among the colonnades and remnants of once mighty gates. Statues of Poseidon, Demeter and Artemis from the altar of Zeus are displayed in the site’s Archaeological Museum.

After an excellent (£20 for two) lunch in the market, I took the antique, recently renovated (and free) elevator, enclosed in a tower made of bricks imported from Marseilles. It zings locals up from the cobbled, sea-level street to the cliff-top neighbourhoods.

The wide Konak Square, with a 1901 clock tower as its central feature, is the spiritual heart of the city, and, you could say, of modern Turkey. The independence fight began in this very square. Two years later, in 1922, the nation’s founder Kemal Ataturk concluded the bitter struggle that finally ejected the Greeks here. Louis de Bernière’s makes it part of the keys scene in Birds Without Wings.

From the square, it’s a short stroll to the cafe-lined seaside promenade, the Kordon – it now has the Güzelyali (Beautiful Waterfront) designation – and the customs house on Konak Pier, built by Gustave Eiffel and restored as a chic shopping centre.  I recommend the short trip across the bay on one of the regular ferries from Pasaport for some fresh sea air and good views back over Izmir.