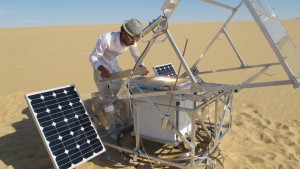 Markus Kayser uses his solar powered 3-D printer to “print” out a pot in the desert.

One of the reasons I’m excited about technology is that new and interesting things are happening so quickly, and, it seems, much faster than in past decades. A shining example of this speed is the proliferation of iPads in the recent Olympic Games in London. At the last Olympics, in Beijing in 2008, the iPad did not even exist. What unforeseen device will we be using when the Rio games are on in 2016?

The advance of the PC, the mobile phone and even the Internet, after the initial breakthroughs had been made back in the 1980s and 1990s now seems leisurely compared to today. The fax machine was the exception. It burst onto the market, then, just as quickly, it was gone, all in a short part of my working life. It did its job brilliantly for a few years, then was superseded by devices that did it better.

Now we have the 3-D printer. It seems to have come from nowhere in just a few years, although expensive models have been around since the 1980s.  Practical things made from it also appeared at the 2012 Olympics, although many of us would have missed them in all the euphoria.

I knew nothing about 3-D printing until I read the Economist article in early 2011, illustrated on the cover with a violin printed by the process. The magazine cast off its normally scholarly restraint to talk off a possible third industrial revolution – click here

There’s something compellingly simple, for the the layman, about the way 3-D printing works. You take a CAD (computer-aided design) file of the object to be produced. Software then tells the printer how to lay down successive, minute layers of material – anything from plastic to metal dust – building up the object gradually, one layer at a time.

Can we expect to see a rapid iPad-pace growth and development in the 3-D printer? Cautionary words are in order. Gartner’s 2012 Hype Cycle for Emerging Technologies shows how they have a tendency to soar, then crash and burn and then perhaps pick up again on a more modest growth curve. 3-D printing is very nearly the top at the top of the first climb. Click here

Sometimes, however, the idea is simply too compelling to fail. I wondered that when I saw the astonishing video of Royal College of Art student Markus Kayser using his solar-powered 3-D printer to turn Saharan sand into a glass bowl. Click here That’s one very expensive pot today, one extremely cheap creation 10 years from now when costs have fallen.

At first I wondered if the things people were making were too twee, decorative, and worthy. Clever but essentially useless. I did another Internet search this week, and found that people are now printing things with very practical applications. Car enthusiasts use 3-D printers to make hard to source replacement parts. People are making bicycle frames and aircraft parts. There are printing out prosthetics and customized shoes, even houses. Here is a Youtube video of a 3-D violin being played. violin being played a 3-D. The US military has taken up the technology, to see if it can use 3-D printers to using make spare parts for weapons and vehicles in a war zone.

President Obama has created the National Additive Manufacturing Innovation Institute, to drive a revival in the country’s manufacturing industry, long since eclipsed by the Far East and especially China.

The Economist article of 2011 said this: “Three-dimensional printing makes it as cheap to create single items as it is to produce thousands and thus undermines economies of scale. It may have as profound an impact on the world as the coming of the factory did….Just as nobody could have predicted the impact of the steam engine in 1750—or the printing press in 1450, or the transistor in 1950—it is impossible to foresee the long-term impact of 3D printing. But the technology is coming, and it is likely to disrupt every field it touches.”

It may be far too early to say that, but small manufacturers, particularly in the US and Europe, who have seen an inexorable decline in their business as low labour cost countries in Asia make the same things for less, can look forward to at least the promise of a brighter future.

You could set up the not so bulky printers in your garage, and start to make things which could be as useful, complex and high-value as you like. No need to build expensive factories and buy complicated tooling machines. It’s fascinating.  I live in a 19th century house in a village where people would have made hats for the Luton straw hat industry, on piecework, 100 years ago. Is it too fanciful to believe that within a few years neighbours of mine could be making a good living, turning out replacement parts for hearing aids or soap dispensers for washing machines, individually or in small runs?

So what could halt or derail this exciting technology, or shunt it into a siding inhabited by arts and crafts enthusiasts turning out impossibly complex decorations and fripperies? Or does 3-D printing, moving fast and growing strongly, have a momentum which, for example, the electric car (EV) lacks? EVs have had a very slow beginning, with no likelihood of a rapid takeup until batteries have more capacity, and become lighter and cheaper. And that could be some years yet. But this technology also has to contend with the entrenched attitude that the petrol car, running on an essentially 100 year-old engineering principle, still adequately fulfils our transport dreams. And that’s a message underpinned by some very seductive advertising. I don’t think the same preconceptions will apply when manufacturers begin to turn out the first must-have 3-D consumer items.

One real obstacle on the smooth path to success is the issue of copyright, which the Economist pointed out a recent article link here  Making an exact replica of something designed by somebody else is intellectual theft. One answer is to make things that are genuinely new and needed.

3-D printer differs from the technologies that didn’t succeed, such as the Sinclair C5 car, in the number of people involved in its development, and they include university departments with the brainpower to take it forward in directions we can’t even imagine today.

Already scientists at the Vienna University of Technology have come up with something called “3D-photografting”. They have built a 3-D printer that uses lasers to let them operate on the microscopic scale. They have already placed a molecule in a three-dimensional material. One possible use could be to artificially grow living tissue.

A new industrial revolution? The notion is not so crazy.