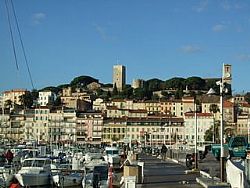 Winter resort down the ages – picture by the author

“This short cigar belongs to a man with no name.

This long gun belongs to a man with no name.

This poncho belongs to a man with no name.”

Introduced in this way in Fred Otne’s totemic poster,  it was almost the film with no name.

A Fistful of Dollars, starring Clint Eastwood,  soon cast off its anonymity, after it opened in 1964, and Sergio Leone’s film deserves its place on the list of the top 10 westerns. The screening of a digitally restored version of the film, to mark its 50th anniversary, will close  the festival on May 24 (2014).

I think I would rather be there than at the World Cup final in Brazil.

This is a piece I wrote earlier.

Cannes is a sparkling diamond on the French Riviera, first championed by British high society 150 years ago. Today it boasts sumptuous shopping, the world’s greatest film festival, a balmy winter and spring climate, grand Belle Epoque hotels, and a rich night life. But you don’t need a gold-plated credit card to survive in this glitzy Mediterranean resort. The writer  finds that some of the best things to do are free, with a choice of bargain places to stay and eat.

Anyone is free to join the mile-long parade along La Croisette, a top spot to be seen on the Cote d’Azure. Dress smartly, wear killer dark glasses and saunter with millionaires, starlets on the prowl, vintage society ladies with their haut couture dogs, and people of all ages gently jogging. Nobody cares if your money is new, old, or if you don’t even have any. Cannes has long been the great escape from our winter. Now membership of the Cannes Club (€750) gives you 10 nights, for two, in a 4 star hotel, and other things to do.) Continue past the port, bobbing with high-rolling yachts, up to the neat little old town, on a wide stone staircase under the Saracens Tower. There’s a marvellous museum,(Musée de la Castre, €3.50) full of well displayed relics from Europe, South America and the Pacific. One room contains some of the Louvre’s overflow collection.

Cannes is small, so there is a more concentrated aura of stardom than anywhere on earth, even outside the International Film Festival (the third week of May). Stay out of town, and travel in by train, if you come for the festival itself, to spot stars on the beach, on La Croisette, and on the red carpet at the Palais des Festivals. There are many public screenings of a dizzying range of films. Beat the critics and decide who deserves your own personal Palme d’Or. Disappointingly, no museum is dedicated to the 65 year old festival, but there are photos in many bars, and fabulous murals on the sides of buildings – look for Buster Keaton, Marilyn Monroe and Jacques Tati. The restaurant La Potiniere served fine food as I sat among official festival posters from 1947.

A 6 minute helicopter flight (€35) may not sound much, but for pure, concentrated thrill, there’s not much the average tourist can buy to beat it. It’s like flying inside the eye of a giant gnat. The all round view is awesome. We rose from the little airstrip, into an instant geography lesson. Inland the foothills bunched up into the nearby Alps, in a riot of contours. To the northeast, the gilded coast ran rich and fashionable up through Nice and Antibes. Just a mile or so off the coast we swung over the two Lérins islands, into which are crammed Roman remains, a Cistercian monastery and pine forests, easily reached by regular boats from Cannes. The mysterious Man in the Iron Mask was a prisoner here. Then one last swoosh over the spot where Napoleon landed, before his triumphant return to Paris.

‘That’s me with Sir Bobby Charlton,’ said the tall and genial bar owner Henri Meyer, producing a fading photo. He added, as if we didn’t know, ‘He won the World Cup.’ This former goalkeeper for Strasbourg and Bayern Munich offers an alternative to film stars in the Taverne de Lucullus, hard by the main market. Photos and pennants marking famous matches festoon the walls of this temple to football. Look for the fading ensign celebrating the great and tragic George Best. Henri keeps a convivial bar – a champagne bottle was open well before noon, behind a rampart of tasty tapas arranged on the counter. He and his wife Colette do a single dish of the day (around €10). So many come on Friday for Aïoli, a Provençal dish of salt cod and potatoes, they do two sittings.Place du Marché Forville. I also liked the CarreD’Or bar, 16 Rue des Freres Pradignac.

It’s the challenge of our times, proclaimed endlessly by TV chefs. You, too, can cook. But how do we know if we’re any good? Les Apprentis Gourmets offers a brilliantly simple option for releasing your inner Paul Bocuse. For €50 you prepare a three course meal (€15, one dish) using professional equipment and a restaurant-standard range, under the skilful and expletive-free, guidance of chef Jacques Di Guisto. Then you transfer to a big table upstairs, and share you triumph with other people on the course. This is France, so the occasion comes with added conviviality, 0033493387876. Book ahead. In Cannes shopping follows seamlessly after a good lunch. Nearby La Croisette (Jimmy Choo, Paule Ka, Dior) for stellar window shopping; parallel Rue d’Antibes for more realistic retail.

The Martinez is one of the city’s grand sea front hotels, an extravagant Art Deco pile hotel built in the 1930s, with a big marble lobby and wide and graceful stairs in the warm colours of the South of France. They met me with a Merc at Nice airport, but I might as well have been Clint Eastwood, a regular here for the film festival, because the service is much the same. (Although they probably whisk Clint up to one of the 7th floor house penthouses, said that the best accommodation in town.)0033492987300. To prove that Cannes was affordable (airport bus – €13, any bus in town – €1), my guide showed me Hotel Alnea ,0033493687777. It’s €60-80 a night for a bright if small bedroom recently refurbished, flat screen TV, free wi fi and a stylish iron chair with a red cushion. Even 2 star hotels have to be good in Cannes. Try the Hotel Des Allees, too.