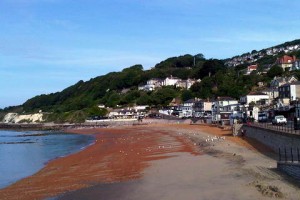 The Isle of Wight is one of Britain’s best loved destinations. There’s plenty to see and do, whether you visit for a daytrip, a pop festival, a spot of yachting or a longer break. I heed the call from over the Solent and checks out Wight’s many insular charms. My list includes a famous pier, intriguing footpaths, an ever changing landscape, a royal retreat, Roman mosaics and sea views right around the compass.

If you want to sample this endearingly old fashioned island on a daytrip, the little hillside town of Ryde is the easy choice. It developed in the Victorian tourism boom, with ranks of Georgian and Victorian villas climbing up from wide golden sands, exposed at low tide. I caught the train to Portsmouth Harbour – direct services run from London, and as far away as South Wales.

The hovercraft is a grand sight, streaking across the Solent trailing a plume of spray. But it doesn’t connect to Ryde’s fine C19th 700 yard wooden pier. For that I needed Wightlink’s catamaran (20 minutes), just yards from the platform. We berthed at the Ryde pierhead, where a recycled London Underground train awaited for the one-stop trip into town. www.wightlink.co.uk

The pre-World War II ex-London Tube trains are a fascinating relic. It’s worth sampling the only surviving route, down the eastern flank from Ryde to Shanklin. There is a good bus service all over, but you go nowhere fast on the twisty, hilly and busy roads. My reward from the top deck of (nice new) buses was the sudden view around the next corner, or over the next hill of some exquisite snatch of coast or wood. It’s a bargain £20 to go anywhere for a week. www.islandbuses.info. There is five miles of pure branch line railway nostalgia along the Isle of Wight Steam Railway, along part of the old Ryde to Newport line. Venerable steam locos restored to their pomp haul antique coaches burnished to a high shine. www.iwsteamrailway.co.uk

Ventnor, on the south coast, is my favourite little resort on the island. Karl Marx, who stayed in a house here, and Turgenev, who started writing Fathers and Sons in Ventnor thought the same. First thing on a beautiful sunny morning the small-scale seafront felt like an opera set. I half expected the early risers to break out in song. But in what language? Next to Minghella Ice Cream and the Golden Sands Cafe, was Pinxto Playa, for “home made Spanish food” and The Met (tapas and wine). I like the old-fashioned deck chair rules at Blakes (established 1830): “Help yourself — we will call round later.” But the facilities are bang up to date. The eco loos in Cascade Gardens have a grass roof, and hydro electric power from the waterfall tumbling off the cliff above.
4

West of Ventnor I sampled the epic 67-mile Wight Way, which threads around the island, with wide views west to The Needles. Many intriguing footpaths lead off, with helpful signs and a nice firm surface underfoot. Steep wooden steps led me up into wood cloaked slopes, and down deep and mysterious fern-lined banks. I imagined time machine meetings. Perhaps a bearded, black-hatted Alfred Lord Tennyson striding out on the Tennyson Trail (15 miles, from Carisbrooke Castle in Newport to The Needles). Or ghostly men in smocks driving spectral flocks of sheep high over the open Downs on the Shepherds Trail. Even a skinny-dipping Billy Connolly running down a beach near Osborne — remember the scene from Mrs Brown? www.islandbreaks.co.uk

As royal love nests go, nowhere on earth compares with Osborne House. It was Queen Victoria and her beloved Prince Albert’s favourite holiday home. The stamp of Albert, whose untimely death in 1861 plunged Victoria into lifelong grief, is all over this Englsh Heritage property (www.english–heritage.org.uk), from the Italianate architecture, to the garden terraces. There are many glimpse into royal family life in Queen Victoria’s “place of one’s own”. The other big visit is the magnificent Brading Roman Villa. Some of the best preserved mosaic floors in the UK depict Orpheus, Bacchus and sundry gods and goddesses www.bradingromanvilla.org.uk. The National Trust looks after big slabs of the Island, and other historic properties.

I stayed in the Hambrough in Ventnor, a Victorian hillside villa high above the sea.  Young Michelin star chef Robert Thompson and his partner Diana upgraded it to a “gourmet bolt hole“ in 2008, nudging the seven bedrooms gently into light touch, 21st-century boutique hotel grade –  wool carpets, under-floor heating in the bathroom and trendy bath products. I poured an espresso from the Illy coffee machine and watched the yachts creep around the headland. Robert’s menu was high quality, based on local ingredients, such as rock samphire and fish from the port below. How about this as an alternative to fish and chips? – pan fried fillet of local sea bass, with grelot onions, gordel olives, pink fir apple potatoes and baby fennel and almond veloute.  01983 856333 www.thehambrough.com

For crossings to the IoW, see also www.discoverferries.co.uk – home of ferry travel.