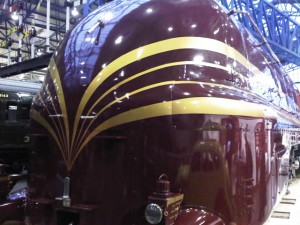 Wherever you are coming from, York’s central location makes it one of the most easily reached cities in Britain. And with trains running in from all parts of the compass, it’s an ideal destination for a day trip or a weekend away at any time of year. The writer revisits one of his favourite haunts to walk the Roman walls, visit fabulous Viking remains, the majestic York Minster, a shed full of gleaming steam locos and browse a host of independent shops.

This is a longer version of my piece which appeared in the Mail on Sunday (click here).

Jorvik is the best Viking display outside Scandinavia, and one of our most
compelling visitor attractions. It grew out a five years dig at Coppergate in the
1970s. Archaeologists unearthed a fabulous haul of 1000 year old material, well
preserved in the damp soil. If you’ve been before, go again, because it’s better
still. New in 2010 are some very lifelike animatronic characters, and a rat.
Sigurd the antler worker, Unni the woodworker, Viking builders, and an arguing
couple talk to visitors in Old Norse. Under your feet, in a new glass-floored
gallery, they recreate the original excavation, exposing original timber-framed
and wattle houses and objects discarded by residents. Audio-visuals show
where the Vikings came from, and how they lived, worked and traded across
the world.

York Minster, towering above the city centre, is one of the world’s great
cathedrals. They are promoting some additional features, including a tour of
the glaziers’ studio to see mediaeval stained glass being restored, and an
exhilarating 275-step climb to the top of the central tower for a view over
pinnacles and gargoyles and out across the city’s ancient streets
deep into the Yorkshire Wolds. Also open for visits is the 1286 octagonal
Chapter House, described as one of the most beautiful rooms ever created.  It
holds some of the Minster’s finest carvings. It’s a measure of the level of past
devotion that there’s an additional walk around 13 churches, all within the city
walls.

The essence of our past railway glory has been gently shunted into a great
hall a few yards from York station. At the National Railway Museum (free)
I went weak at the knees before the maroon, sumptuously-streamlined Duchess of Hamilton. Also on show are Mallard – the world’s fastest steam loco – and the last steam loco built by British Railways, Evening Star. These pristine titans keep strange company with the Japanese Bullet Train and a Chinese steam leviathan. I saw opulent Royal Trains, and a Scottish loco that served in France in World War Supporting exhibitions recount the demise of the steam loco, and the trashing of rural rail by Dr Beeching in the 1960s.

The Romans founded York as one of our great cities, with the longest city wall
in Britain. All that imperial legacy comes together in the splendid, newly-
refurbished Yorkshire Museum – it reopened in 2010. They’ve opened up old
windows in the Georgian building  and pulled down partitions and walls to let
the light flood in on bright new exhibitions on Roman and Medieval York. One
fourth century character brought to “life” by close study of her bones is the
Ivory Bangle Lady. Then there’s the astounding collection of Viking treasure,
the Vale of York Viking Hoard – 600 coins, ornaments, and silverware found in
2007 by two metal detectorists. The find was one of the objects in the
BBC’s “History of the World” series in 2010.

People have swirled around York’s historic heart and probed down its narrow
ginnels and snickleways for millennia, looking for a good meal. But I doubt if
the choice was ever as wide as today, among the many independent
restaurants in old city buildings. I tried two of the best. Meltons Too (in
Walmgate) sources its ingredients from Yorkshire, (carpaccio of venison as a
starter) with fish from Scarborough, and local beer.
Nineteen Restaurant is in a 15th century building on Grape Lane (“modern
British with a European twist”.) My onion and thyme soup came in a little
ceramic pot. The pistachio fondue was a delicious reminder that pudding is too
important not to be prepared perfectly fresh. From my first floor table I
enjoyed the view down Swinegate, one of York’s many mediaeval streets.

It’s the classiest form of recycling. Take a resplendent former North Eastern
Railways headquarters, near the train station, and turn it into the sort of
luxury stay the company’s topped-hatted board members would have
demanded. The five star Cedar Court Grand Hotel retains most of the luscious
touches of an opulent age of building – from hand-made bricks and Portland
stone on the front, to the lobby’s black and white Belgian marble floors, and
the patterned wood blocks and imitation Roman mosaic in the corridors, where
clerks once bustling about making the trains run on time. Only in the lift, where
your reflection stretches away to infinity in the all-round mirrors, does the
designer reach the 21st century. My room, painted in soft pre-war colours,
was understated classic elegance, with HD TV.