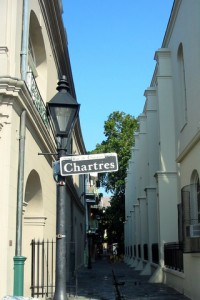 The good times are rolling again in the ancient French Quarter of New Orleans. I was in the Big Easy a few days before Hurricane Katrina struck in 2005. I report on how the USA’s most crazy, wonderful city is returning to its exuberant best, and choose my pick of the things to do there.

The French Quarter is a glorious exception to the bland uniformity of (most) US cities. New Orleans’s mad, magnificent little corner of pre-Revolution France pinned to southern Louisiana, laid out in 1718, escaped lightly from the ravages of Katrina. Mardi Gras (February) is a great, if crowded, time to celebrate its recovery.

But you can stage your own parade at any time of year, for the crazy masks, the ornate balconies dripping with flowers and voodoo beads, the Cajun crawfish and sizzling cocktails. In a few steps you pass from the racy all-night bars on Bourbon Street, to sophisticated art shops, and gilded homes on graceful flagstone-lined courtyards thick with foliage and bubbling fountains. At Cafe du Monde there is often a trumpeter to play you ”It”s a Wonderful World.”

We rode the venerable and splendidly leisurely 80 year old St. Charles streetcar all the way to Audubon Park, where white egrets tip-toed delicately through the puddles. They repaired overhead electric lines destroyed by crashing oaks, and restored the service down the entire length of St. Charles Avenue to its original (pre hurricane) terminus by 2008. The green cars were undamaged and unchanged – the same worn wooden interiors, distinctive sulphury smell and antique clanking machinery. They trundle once again past many a grand house, halting at stops named after Greek muses, like Melpomene and Terpsichore. $1.25 each way. The first of the restored candy-apple red streetcars from the Canal Street line, badly damaged in floodwaters, began rolling again in 2008. The rest of the fleet was planned for return in 2009.

We could not resist the call of the calliope, the sweetest sound on the Mississippi. The sizzling 32-note steam pipe organ atop the SS Natchez, announced the afternoon river trip. Steam plumes shot from each whistle to synchronized coloured lights. The mighty Natchez, built in 1975, recalls the great days of the Mississippi steamboats, which once plied from here deep into the US.  From high on this authentic sternwheeler, we had a splendid view over the French Quarter, built well below river level. Our lazy two-hour drift took us down river past old cotton plantations and the site of Battle of New Orleans, where US forces routed the British, the last time we fought our old friends. The Natchez also does dinner and jazz cruises. . 001 504 586-8777 .

The beat goes on

I have a poignant memory of a busker playing Ring of Fire outside our French Quarter hotel window, a week before Katrina. For a time the music deserted the town where some say popular music began, because performers lost their homes in the suburbs. Now many are back. The revival is in full swing in clubs such as Snug Harbor, Tipitina”s and Preservation Hall. In the warm bath of a New Orleans deluge, our guide led us to where Satchmo sang “Heaven on earth; they call it Basin Street.” And the lavish St. Louis No 1 cemetery, a forest of massive, dignified sepulchers where many old troupers now rest. New Orleans Jazz & Heritage Festival (with such stars as Wynton Marsalis, Aretha Franklin, and Tony Bennett), April  – May;  French Quarter Festival, April.

Aside from the human tragedy, the superb Audubon Aquarium of the Americas, one of the top five aquaria in the US, was the biggest Katrina casualty. The building survived, just inside the Mississippi levee, but the entire collection of 10,000 fish perished through loss of power. Much of the collection has now been replaced, many through donations and help from other aquaria. The bigger creatures, including the famous white alligator Spots, and the much loved sea otters Buck and Emma, were moved to safety. The penguins, waddling triumphantly into their old home, led the return when the Aquarium reopened after six months. The big displays, the Caribbean Reef, Amazon Rainforest and Mississippi, are back along with lots of new creatures, including sharks and stingrays. The Insectarium (dedicated to the 900,000 species of creeping, crawling and fluttering things) opened in 2008.

Four of the best

The four fine restaurants we visited are open again, as welcoming as ever. I recommend them for their food, style,  music and indominatable sprit. Brennan’s brunch is a two hour feast of high elegance. My pick was the Eggs Owen (Idaho potato, onion, celery and green bell pepper), and the fiery finale of Bananas Foster (bananas, butter, sugar, rum), invented here.  At the Court of Two Sisters we sat under the wysteria by a tinkling fountain and the resident jazz band, for tea and cakes.
For dinner Galatoire’s was an amazing haven of calm in raucous Bourbon St. Even senators have to queue to be served by a procession of splendid tuxedoed waiters.  In A Streetcar Named Desire, Stella took Blanche there. Some of the finest cooking in town is at Arnaud”s Jazz Bistro, Passers by stop for the live music. (See below and above for the four web links.)
The writer stayed at the Omni Royal Orleans in the French Quarter, travelling with British Airways Holidays.