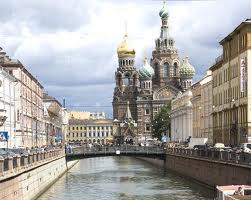 Newly minted with its old name St Petersburg, Prime Minister Putin’s spruced-up hometown is bidding for a place among the world’s great short-break destinations. I remember this city as black and white Leningrad. But I much prefer the remastered Technicolor version, with canals to match Amsterdam, wide boulevards on a par with Paris, and palaces to rival Rome.

A prospect of power.

One walk unites the power and the glory of this city. Start in the vast Palace Square where the Bolshevik revolution began. Marvel at the great statue of Peter the Great on horseback. Then head down two miles long Nevsky Prospect -Russia”s Champs Elysee-and imagine Tchaikovsky and the dancer Nijinsky taking the air (ballet was invented here). Or ride the trolley for a quick overview of this wide boulevard, designed by a Frenchman. Then walk back, past shoulder-to-shoulder palaces and churches, the monumental Kazansky Cathedral, and the Anichkov Bridge with its splendid horse statues, many of them freshly scrubbed to impress G8 leaders at last year’s conference. The Literaturnaya Café, just like old St. Petersburg inside, is your coffee stop. The great writer Pushkin took his last meal here, before he fought his fatal duel with the man who took his wife.

Come summer, bedtime is abolished in this most northerly of cities. Under a milky, midnight twilight it is yesterday, tomorrow and right now – all at once. In an exuberant response to the long dark searingly-cold days of winter, the council designates White Nights as the 50 days from May to July when the sun falls no lower than 9° below the horizon. They stage all night performances in parks, palaces and the magnificent Mariinsky Theatre (formerly the Kirov). There’s a White Nights Jazz Festival www.jazz.ru, and street musicians and food stands all over. Our treasured memory is strolling at 1 am alongside the river Neva in a strange, magical light past the Peter and Paul Fortress and the cruiser Aurora, whose booming gun announced the revolution.

Missing the Hermitage, one of the world’s foremost collections of paintings, sculpture and treasures, would be like passing up the Coliseum in Rome. First created for Catherine the Great and kept safe by the Soviets, it’s a match for the Louvre, with 350 exhibition rooms housing the best collection of French Impressionists outside France, and whole walls full of Rembrandt and the early Picassos. The setting is just as grand, especially in the state rooms of the Winter Palace where you glide over polished floors under glittering chandeliers. Book online (www.hermitage.ru) so you jump the queues. And, with a possible 5 miles of walking, and six years of viewing to do every item justice, use the website to decide which rooms to target. If you hire a guide, just make it clear what you want to see.

When we visited in Soviet times, dining out was for masochists desperately seeking variations on a single dish, usually stroganoff. Today there is a wide choice of good eating, from Lebanese to Georgian, French to Italian. But for the hungry hard-walking tourist, diving down a side street on the hunt for a Tolstoy or Dostoyevsky haunt, or to find another canal bridge for that perfect picture of a palace reflected in the water, the blini is the perfect street food. Look out for the wooden stalls. Somewhere between a crepe and a pancake, blini are made with buckwheat flour, and filled with mushrooms with sour cream, smoked salmon, even caviar. For the sit down version, try the Bliny Domik restaurant, for succulent pork, cheese, and jam blinis.

This city has a good choice of hotels, including the renovated five-star Astoria and the grand Eliseev Palace and Sheremetev Palace. For something smaller, try the Casa Leto in a restored 19thC building near St Isaac’s Cathedral, turning heads as one of the slickest boutique hotels around. It starts with the airport pick up. “Extras” include free Internet and all day light refreshments. Owner and designer Adriano Leto made his mark with elegant furnishings and fittings against exposed stone and recycled old wood. The high-ceilinged rooms are named after the city’s original Italian architects. New this year are personalised trips including mushroom picking, ice fishing, having your portrait painted, and helicopter rides to a lakeside monastery. Calls to the English-speaking desk (00 7 812 600 10 96) are free with Skype. www.casaleto.com . From £83 a night.

Beating about the Banya.

Relax. Nobody expects you to sprint stark naked out of a steaming banya ( Russia’s meaner version of the sauna) at -20 centigrade and dive into a snow drift. That’s strictly for the diehards in the countryside in midwinter. They tone things down in the city banya, where the sexes are segregated and you can cover up. The optional extra, as humidity approaches 100%, is some brisk beating with birch twigs – it opens up the pores. You may thrash anybody standing nearby, but expect them to hit back. Philosophical regulars say the quick switch from jungle heat to the ice cold plunge pool and back super-charges the soul and as well as the body. Whatever. You feel utterly terrific afterwards. Try the Kruglye Bani.