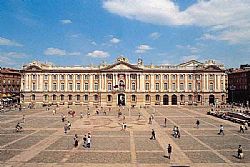 Toulouse, La Ville Rose, the “Pink City”, deep in the south west, is one of the venues for Euro 2016. Wales played there on June 20th.

It is of France’s most handsome cities, mid-way between Atlantic and Mediterranean and close to the Pyrenees, it contains elegant ancient wonders alongside the modern marvels
of the European aerospace capital. And there is wonderful eating as a bonus.

(The tourism Pass gives free admission to the museums of the city centre, and free use of the transport network, on metro, tram, bus and airport shuttle service.)

If you don’t have the budget for drinks at a café in St Mark’s Square, Venice, this is the affordable substitute.
Toulouse’s Place du Capitole is one of the great city squares of Europe. There’s a vast car-free space for strolling, and people watching, and a one of those immense old civic buildings the French do so well as a backdrop.
The Neoclassical-style Capitol (Town Hall), built 1750, is so big, at
140 yards long, there’s room for the opera house (Théâtre du Capitole) as well. Find a table at one of the many cafes, and order pre-dinner drinks. Then call back for a nightcap, when the square is decoratively lit up, as are many of Toulouse’s public buildings and bridges.
If you want to eat on the square, try the Grand Cafe de
l’Opera. This glossy brasserie is said to serve the best oysters in
town.

Trek to the stars.

The stellar ambition of Cité de l’Espace, Europe’s premier space
museum, is apparent from afar. It is marked by the 150 feet
high life-size version of the Ariane 5 rocket, rising out of the Toulouse suburbs, ringed with Caribbean vegetation to imitate its launch pad in French Guyana. Among a
constellation of exhibits are a full-size model of the Russian satellite
Sputnik launched in 1957, a big hunk of Moon rock, and original sections of the Russian Mir craft and the Space Station. There are enough intelligent displays and hands on exhibitions to fill a day. But a minute is long enough in the gyroscope, where you are hurled upside down and back to front for the 360 degree spin dryer treatment.
Then sit back and gaze at the universe in the state of the art planetarium.

…..
There’s a temporary exhibition at the Cité de l’Espace, until 31st August 2016, entitled “Space, what a story! The dream, the exploits”.
This is a flavour: “Impossible dreams, improbable machines… Discover the craziest ideas that fed the imaginations of our ancestors…[includes] vintage
technological objects… Travel 50 years back to
experience the thrill of the first great space missions…participate in mankind’s greatest adventure.”
www.cite-espace.com

It started as a medieval economy measure — pink brick instead of more expensive white stone. Fortunately Toulouse stuck with its distinctive colour code, and gave its compact old heart, largely intact since the 1400s, a rare and seductive decor. Wander the high, tight streets, and take in the splendid highlights. The 11th century Basilica of St. Sernin, the largest (300 feet long) and finest
Romanesque (12th century) church in Europe, contains the tomb of St. Thomas Aquinas. The art gallery Hôtel d’Assézat has landscapes in intense colours by Pierre Bonnard. And the 50 towers of Toulouse – you see them. One of the best is above Bernuy Mansion, home of the baron who
grew rich trading woad, the same blue dye Julius Caesar saw the ancient Britons wearing.

Airbus Headquarters at Blagnac, in suburban Toulouse ,is the home of the world’s largest airliner. The 500-plus seat Airbus A380 is Europe’s answer to Boeing (the wings are made in North Wales). It’s 210 feet long and as high as an eight storey building. They start the 90 minute A380 tour with an
overview of the programme, then drive you around the runways to see the outside testing areas and the production facility in an immense hangar. Lucky visitors may even catch these monsters taking off or landing on proving flights. There’s a strict no
photographs rule. You must carry your passport for
identification. And book ahead. www.taxiway.fr

Eat with the locals

We were surrounded by regulars at Le Bon Vivre on Place Wilson – the sign of a good French restaurant. They were here for no-fuss farmhouse cooking at its purest. The day’s favourite was the enormous cassoulet in an earthenware bowl: it’s their generous version of this regional dish. They make it with both duck and pork. I started with smoked cod with garlic mayo, followed by braised lamb in a succulent wine sauce, and a hot apricot tart to finish. Simple but perfect. www.lebonvivre.com. Next evening
we sat at a pavement table outside La Braisiere for more, excellent, straightforward French food — a wide range of grills from a wood oven, closing with nougat ice cream in honey. www.labraisiere.fr

This was no ordinary hotel. Our taxi driver took an enormous circuit to find the only way in, up a one-way street as narrow as a Pyrenees Pass.
The Hotel Garonne hides away, down below the ancient bridge over the river, just off the city centre. It’s so tiny and intimate, they serve you breakfast on a big tray in your room. Reception doubles as the bar.
I counted 30 steps from front desk to our room, redecorated in
warm red and beige, dominated by a big oval mirror ringed with Japanese characters. www.hotelgaronne.com,

Ten strides over the narrow street is the hotel’s own Restaurant le 19. This former medieval fish cellar is all wood panels and terracotta bricks under a curved ceiling. Submit to whatever delights are on the menu, e.g. cream of watercress soup with warm oysters; magret of duckling with ginger and crushed apples; baked red snapper with spider-crab sauce; saffron-flavored sabayon with ice cream made from unpasteurized milk.

Rio Loco Festival (world music) has an appropriate theme for 2016: The Celtic World, taking in Ireland, Scotland, Isle of Man, Wales, Cornwall, Galicia, Asturias and
Brittany. (14th – 19th June) : www.rioloco.org
”Sacred Science” continues until August 2016, as an opening event at the new site of the Quai des Savoirs (in the Science Quarter between the
Université Fédérale and the Muséum). It aims to
“promote and share scientific, technical and
industrial culture” which asking such questions as “The Earth is round. But is Space curved?
What about Time, does it truly exist?”

The Euro 2016 football stadium is in the heart of the city, on the Ile du Ramier. It was entirely renovated for the championships.
www.toulouse-tourisme.

Rugby enthusiasts might be particularly interested in a museum for the Stade Toulousain rugby team, which opened in 2016 on the 1st floor of the
café Le Dauphin (city centre): on display are posters, press cuttings, flags, signs and billboards recalling the history of this illustrious club.

In the Augustins Museum there’s a new work sitting ”at the crossroads of architecture, art and design” in which a designer has reinterpreted the museum’s Hall of Columns. It centres on XI and XII C stonework from the three most important religious buildings in Toulouse: the
basilicas of La Daurade and Saint-Sernin, and Saint-Étienne Cathedral. Augustins Museum- www.augustins.org

In 2016 the Chapel of the Virgin at the Jacobins Convent is open
to the public for the first time.

There’s a choice of walking trips (from the Vins Vignes et Voyages agency) which include a gourmet food walk and dinner. It takes in the Victor Hugo
market, for an introduction to speciality foods of
the South-West, and a wine cellar to select wine pairings for
those ingredients. Then clients choose a desert in the
best patisserie in town. They take the finished meal in a Toulouse apartment.

The Tourist Office offers architectural walks, taking in department stores, markets, museums and homes, all created or transformed by renowned architects, from 1945 until now.
Another walk follows the story of the Dominicans in Toulouse, the city that gave birth to this religious order. It visits the
Saint-Romain priory, the Jacobins Convent and Maison Seilhan.

The writer travelled by Eurostar and TGV, www.raileurope.co.uk