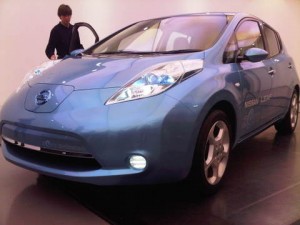 Social media will ensure that we know more (and sooner) about electric cars, and how they are driving, then any vehicle in history.

As owners feed real experience to the world through Facebook and Twitter, manufacturers will be able to build up a far more complete picture of consumer response than any market-research firm could deliver. And it will not cost them anything. But before we get overwhelmed with those early adopters’ reports, this is what Tom Franklin, the San Diego man who in mid-December became the worl’s second Nissan LEAF driver  told www.plugincars.com.

He described the transition from his 2006 Toyota Prius to a 2011 Nissan LEAF as a paradigm shift.

“In a gas car, you push on the accelerator and it pulls on a cable, which changes a valve to put more gas down a line which eventually gets to cylinders that create explosions that drive a drivetrain.”

Compare that to the LEAF. “I push on the accelerator and it’s immediately delivering power to the wheels…If I were to design a perfect car, it’s going to work like the Nissan LEAF. I push and I go.”

So far the LEAF’s range hasn’t bothered him much. Tom’s round-trip daily commute is 20 miles, so even on days when he commutes and adds on on a couple of extra 10 – 15 miles trips to visit clients, he still has plenty of range. “When I get up in the morning and it shows a 70 mile range, I just can’t imagine a scenario where I would get caught.”

For Tom, it’s mostly been a matter of getting used to the routine of charging every night. But then, he says, he is never going to happen to visit a petrol station.