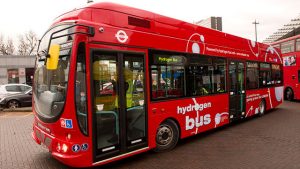 This piece, by Gareth Huw Davies,  first appeared in the Sunday Times, September 2006.

There is a precedent for bus routes in London that come to represent something rather important.  So just as the Clapham omnibus, and its right-thinking passenger, has entered the language as a measure of common sense, could the more prosaically named RV1 route, between Covent Garden and Tower Hill, become the defining location in the UK’s switch to clean public transport?

It’s a showery late summer Monday morning.  We set off down the Strand, on the meandering itinerary past many tourist attractions, aboard a freshly burnished Mercedes Citaro bus, with the impeccably-coutured Sultan Dar at the wheel. Bystanders stand no risk of the asphyxiation.  Issuing from that complicated paraphernalia on the roof use nothing more noxious than water vapour. This, according to Transport for London (Tfl), makes it one of the most environment- sparing buses in the world. But what do the passengers think?

Sylvie Bodeux and her partner Jean Yves, are from France. They are used to travelling by ultra-swift TGV, and they live in Lyon, a public transport showpiece, with smart new trams, trolleys, automatic underground trains, and bikes loaned free to commuters.  Can Londoneven hope to compare?

At first Jean Yves , who doesn’t speak English, having caught the word “hydrogen”, embarks on some understandable word association leading to “explosif” and “dangereux“. I pass on my information from Tfl, that there is no danger whatsoever to passengers from the hydrogen carried in tanks on the roof, although as a precaution they don’t use spark-causing tools back to the depot.  So he offers some diplomatic “Yes of course, a very good thing” endorsement. Daughters  Lucie and Lise seemed more impressed by the London Eye as we pass over Waterloo Bridge.

Sylvie — as an English teacher she is clearly caught our humour — sees another problem: ”Ah, but you are going to lose the smog and that image of London that we foreigners so admire.”

London is one of Nine European cities which have been trialling the specially- built Mercedes hydrogen powered fuel cell buses since 2003, in the largest such project in the world.  The project is backed by 40 organisations, including manufacturers, operating companies and universities, backed by the European Union and, in the UK, the Energy Saving Trust, supported by the Department of Transport.  The cities were chosen to represent a good mix of topography, road congestion and climate.

Proponents believe fuel cell buses could help reduce city air pollution, and street level noise as well as contributing to cuts in greenhouse gas emissions.  The vehicles are being monitored to see how they perform and how they compare with conventional buses running on the same routes.

Passenger Dennis Jorg listens with interest to the list of virtues claimed for these vehicles — they include a top decibel level 68, of which means we don’t have to shout. But, as a London resident, he has a financial stake here, and he sees a snag. “In the long-run they may save the environment but we have to consider the cost. Do they break down more often, and do they cost more to repair?”

He doesn’t know the half of it.  These buses cost roughly six times the equivalent diesel bus; and the manufacturers provide a dedicated unit on permanent standby, to ensure they don’t have embarrassing public breakdowns, that would impress a Formula One team.

Praise is unstinting, however, from German tourists MrsRiffel and her son. “It matters to us as tourists, if this city is polluted,” says she.  “Yes, we welcome this,” says he. “I’m impressed by this sort of technology and happy that it’s starting to be used, even on a small-scale.”

I show them the promotion leaflet, which manages to explain the fuel cell process even to me, who has always struggled to explain how the internal combustion engine works.  As hydrogen gas flows from the roof cylinders into a fuel cell, it combines with oxygen and is converted into water. This process produces electricity, which drives the vehicle. The only emission is water, which forms a vapour cloud as it leaves the exhaust.

By now  the debonair Mr Dar is steering the bus over Tower Bridge. A few minutes later, and bang on timetable, he brings us to the final stop in a dingy backstreet behind Tower Hill, which was not the right place to show off such a splendid piece of technology.

He knows as much about this vehicle’ s performance as anyone. “I drive this bus five days a week, throughout the year.  London streets are very polluted and I think this is a brilliant idea.”  So do many others, it seems.  “A lot of people are interested in this bus.  They see it on TV and they travel from as far away as Cornwall and Scotland to travel on it.

Does that cause problems to other road users?  “It might where it’s a very quiet crowded ,noisy road.  So you have to be extra careful. But it is not a problem.” And even if pedestrians and other road users don’t hear the bus so well, they can scarcely miss it, with its six tanks piled on the roof, and emblazoned with promotional slogans.

What Tfl’s enthusiastic flyer also does not explain is that it can only last 125 miles, at a Clarkson dersion-earning top speed of 50 mph — not that it matters in the clogged streets of London — before they have to send it off, some time in the middle of the afternoon, to a special refueling station in Hornchurch.  Meanwhile the stalwart, standard diesel powered London bus will grind valiantly on, from dawn until past midnight, without returning to the garage.

I put it to these points to Mike Weston, operations director for London Buses. This was a trial, he explained, and the high costs incurred by three specialist buses had no real meaning.  Undoubtedly they would come down as hydrogen was more widely used, and the size of the fleet increased.

And although he acknowledged that the vehicles received luxury mechanical pampering, they were no more prone to break down than other buses.  In the long term it might turn out that fuel cell buses failed less often, because they had fewer moving parts. Some problems, for example , were already being solved by a man coming out with a computer.

” At the outset we were a little sceptical about these buses’ reliability. We started them off on another route, complementing existing buses. They proved so dependable that we switched them to RV1, as part of the normal timetable.” As for their daily range, Mercedes is to deliver a new demonstration bus, which it is hoped will address that issue.

Hydrogen can be produced in a number of different ways. The London buses receive theirs from the least environmentally friendly process, (steam methane reforming method) from natural gas, a fossil fuel, which is then transported in tankers to the Hornchurch refuellingstation. Weston said, once again, useful comparison was being made to much greener generation processes, such as in Barcelona‘s, which involves the splitting of water, using solar power, into hydrogen and oxygen (electrolysis).

He foresees large numbers of hydrogen buses running in London, but probably not for another 10 or 15 years, after a slow but steady take-up of the technology.  A more immediate solution for London might be the hybrid bus, powered by diesel and battery, currently on trial in Outer London.

London‘s Deputy Mayor Nicky Gavron, described the experiment so far as “more than promising”, with a “very positive” response from the public. She said a further 10 hydrogen-fuelled buses were being procured.

“Anybody riding those buses must now see hydrogen as part of the answer to pollution and energy-use in the capital.  We want low carbon transport in London as quickly as possible, and hydrogen is going to be a key to that because in terms of carbon emissions ultimately this is the Holy Grail.”

Barcelona was chosen as a “warm climate” location in the trial.  Municipal transport operator TMB introduced its fuel cell buses in November 2003, testing them on the formidable hills which contain the northern part of the city. The buses use hydrogen produced in one of the most environmentally friendly ways, by the electrolysis method, using solar energy. A survey among passengers showed a 89% positive response.

Hamburg, chosen for its “pleasant” climate, is now trialling nine fuel cell buses buses, powered by hydrogen produced through the electrolysis process, where the energy source is wind power.  The city’s transport operator reports that some German passengers will routinely let conventional diesel buses pass and wait for the quieter fuel cell Citaro.  The city’s hydrogen project manager reports only “a few” breakdowns

In Porto — representing a warm climate — the buses in the fuel cell trial use hydrogen produced in a refinery. The buses are deployed on a demanding route which is 13 miles long, with 22 stops and gradients of up to 12%.