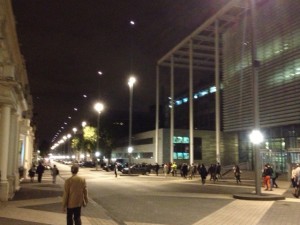 We cannot possibly know to what extent good ideas and smart technology might help us mitigate the effects of climate change, and even slow it down. Just as in the 1980s we had no inkling of how developments in computer chips and electronics would enable vast numbers of us to communicate with one another instantly around the world, and access a limitless amount of information, through a simple device we could carry in our pocket or handbag.

One way forward is to simply let the brightest and most energetic companies put their product or process out there, if they can overstep the many pitfalls of commerce, and let the market decide. But how many potentially planet-saving ideas would be left at the roadside because the people who came up with them weren’t good enough at business, or couldn’t learn fast enough?

Sensible societies, and governments, know that they have to nurture and support would-be entrepreneurs and their bright ideas, and help them develop whatever it is they have to offer. Some, possibly many, will still fail, but for better reasons. More will succeed. And who knows what benefits this might bring to us all?

Enter Climate-KIC, a useful ally for prospective entrepreneurs to acquire. It describes itself as Europe’s largest public-private innovation partnership, working with start-ups and bigger companies to address the challenge of climate change. Never heard of Climate-KIC (it stands for Knowledge and Innovation Communities)? No matter – this isn’t a public-facing body. What does matter is that people with an idea know where to find it.

With hubs in seven countries, Climate-KIC  receives funding from academic and private sector partners, with an annual grant from the European Commission through its European Institute of Innovation and Technology (EIT). There could scarcely be a better location for its UK hub, in Imperial College’s London Campus in South Kensington, next to the Grantham Institute for Climate Change and the Energy Futures Laboratory, with which it shares facilities and resources.

I met Climate-KIC’s UK director Prof Richard Templer in his office here, in August 2014.  He had just come from presenting the prizes to the two winners of the 2014 Venture Competition, held at the Britten Theatre in the nearby Royal College of Music. Nine start-ups had each made a five-minute pitch to a jury of four expert judges, and then been quizzed in their turn. (The two winners were GrowUp, a small company which grows salads, herbs, microgreens and fish on sustainable urban farms; and Reduce, which has developed a technology to remove print from paper so it can be reused several  more times.)

Templer outlined Climate-KIC’s guiding philosophy. “This is our fourth year. Our mission is to grow the green economy in Europe, which had lost its innovation mojo. We run a pipeline for innovation, the sort of start-ups you saw today. We need to inspire and stir students to success, giving them as good a chance as possible to make a success of their businesses.” Climate-KIC’s Accelerator programme is open to individuals or existing companies with “an idea for a brilliant climate-related break-through” who don’t know how to convert it into a commercially viable business.

Templer and his team will help the most promising start-ups connect with the right partners, help formulate their business plan, develop their entrepreneurial skills and fund the business through the early stages. They will provide “the tools, opportunities and network to transform ideas into commercial success’. “And that includes students of all ages,” said Templer.  “So you saw Bert Bingham of Novagg.” (His pitch was for the manufacture of lightweight aggregate from 98% waste content, diverted from landfill.) “He is older than I am, and I am in my mid-50s. There are still things we can do to help people like him.

“We are agnostic. We just love the ideas. We don’t really care where they come from, frankly. Whether it is  a graduate with a start-up, or an existing SME. We will help them with a education programme.”

Another part of the service Climate-KIC offers is connecting the people with ideas with its 240 business partners, some of them big and well known names such as Bayer, Velux, Sainsbury’s and Knight Frank. “The idea is that you take people with challenges, and you engage them in conversation with companies who might be able to supply, or develop answers and then you fund them and develop whatever it is you are going to develop.”

As well as offering expert assistance, in marketing, business and technical expertise terms, Climate-KIC’s gives the would be entrepreneur the support of Imperial College’s facilities “for measuring and verifying things, and also actually being able to pilot stuff. So when you get into our ‘pipeline’ all that expertise is available to you.”

A good example of somebody coming through the “pipeline” is Kate Hofman, co-founder with Tom Webster of GrowUp, one of the 2014 competition prizes. (*) “Kate saw all sorts of things in this five-week course we provided. And that inspired her. She went back to IBM, where she was working, and three months later she decided she needed to make her own company. “The technology Kate showed in her pitch came after she visited Switzerland. She was  inspired by work a company was doing there.  GrowUp went on to develop and use their own tech. This is an example of how networks influence things.

“We inspired her to change job. She didn’t ask us for money at the beginning; she crowd sourced instead. The fact was we took a risk on her. But she [and her partner] had done some great things, they made all sorts of connections in London, they had raised the money themselves. “In three months they had enough money; in four months they had created the whole thing. It was terrific to watch them do it. So we put them into the process. There is the pitch training and sales training and all sorts of other things. But what we were really able to do was create links for them.

“We were able to put them in contact with people who could give them some market pull, and allow them to trial things. We did other things with a company called Naked Energy, which is one of our first successful start-ups. They have a photovoltaics system and they thought it was best in class in the world, but they couldn’t prove it. So we spend money on getting measurements done here at Imperial, and as soon as that happened it transformed them.”

Some companies launch into business viability quite quickly. An example is start-up Flowflex (rejected by the BBC’s Dragon’s Den) making  the Shower Power Booster. “They made contact with Sainsbury’s through us in a competition, and they suddenly realised that people were just wanted to buy their product anyway. By last November they were selling 1000 a week. They didn’t need us any more. ”

Another business was doing satellite imagery and analysis of the images. “They just started getting contracts and were doing analysis. People were just coming to them anyway. They exist, they are flourishing and they have become a partner as a consequence. “80% of what of what we do is the ‘You will probably get this to market in five years’ category. It will make money. The other 20% is high-risk, high reward stuff.”

Such as Chess, one of the  entrants for the 2014 Venture competition, with a process to generate electricity from fossil fuels while cutting the amount of CO2 in the atmosphere. “Chess, that’s a 10 year deal.  The market for this doesn’t exist at the moment, because there is no price on extracting carbon from the atmosphere. We’ve got public money, and that gives you certain responsibilities. Our judgement is being made on behalf of the taxpayer. But the IPCC reports, the best scientific judgements on climate, tell you you have to do this. So we will do it. We will invest, we will kick it off and we will be looking for others to come in and co-fund.

“The thermodynamics stack up, we’ve really torn it into little bits. [Now] it will have to gp through a whole set of engineering projects to get it to scale. It’s still got to be piloted, so people can go and see it and touch it, and watch it.

“The thing that makes me feel most positive is just the sheer fact of what’s going on in the world. When I’ve talked to colleagues in government my message to them is – we’ve got to be a part of this, this is a big economic change. If we are not in the game, we are going to be a has-been economy. We have to play in this park.”

And Climate-KIC’s part in this? “I think, yes, we are unique. I haven’t seen anything like us anywhere in the world. The constellation of universities beyond the UK we have in our partnership – apart from one, they are all in the top 100 universities in the world, significant universities.”

Richard Templer was head of the Chemistry Department at Imperial before taking up this post. “In the last 15 years of my career I wanted to do something that wasn’t research. I had been involved with three spin out companies and felt I knew a little bit about it. I wanted to do something either connected with the ageing population, or climate change, because it was a bit of a change of direction for me. “I had lead a bid from the college for a very large amount of money for a bio-energy unit which almost killed me. We failed to get it, but I learnt a huge amount. Then this opportunity came up, and it was the same order of magnitude, same order of money.

“It’s my simpleminded conviction was, unless you’ve got money you can’t make an impact. And it’s not just getting this money, it’s then enabling others to bring in money and to create a real focus. What tends to happen is that money comes in from the Exchequer and it gets salami-sliced all over the place. And to create critical mass and be efficient requires the reverse. One way of doing that is to get enough money that you can attract other money.

“I think we are entering a new phase of our existence. We have all the ingredients we want to create a really vibrant system for doing this stuff.

“As a scientist I wouldn’t predict the future, but as a human being I feeling in my blood that something is going on. And that we are, I hope, a significant small part of it.”

* GrowUp and Reduse were selected as the two most investable UK climate start-ups of 2014 and  will proceed to the next stage of competition, to compete in the Climate-KIC Venture Competition finals in Valencia, Spain in October this year.