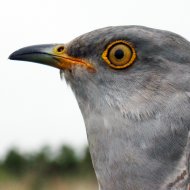 Ash, one of the cuckoos being tracked by the BTO in 2015

What became of “our” cuckoo?

That must sound odd. The cuckoo is the last bird anybody could claim ownership to. This is a free spirit, notorious for its irresponsible parenting, shamelessly exploiting many (in the current parlance) hard-working bird families. How can we possibly speak of “our” cuckoo?

If you want an annual visitor to adopt, much better to choose the

swift, or pied flycatcher, nesting nearby or coming to your garden year after year and down the generations. But a cuckoo?

The fact remains, we haven’t heard “our” cuckoo for three years now. Let me explain. We live on the edge of a village in rural Buckinghamshire. For over 20 years, in the third or the fourth week of April, we would first hear a cuckoo in the countryside to the north of our house. From then on, we would hear it, or another, or others (how could we possibly know) almost without fail, daily, for the next four or five weeks.

Cuckoos are known to return to the area where they were born, so it is likely that several generations in the same cuckoo lineage returned to this same area of fields and hedges and woodland around the Grand Union Canal.

Sometimes the cuckoo arrived a week or so late, after its  prodigious travels from from south of the Sahara. Very rarely was it earlier than about April 20th. The call of the cuckoo was so predictable, I grew quite complacent about it. I used to feel sorry for friends living in London, who would rarely ever hear the cuckoo in spring. Weren’t we the fortunate ones?

I can recall the year when it didn’t turn up. In 2011 or 2012 it arrived, eventually, and called a few desultory times. Then in 2013 I heard it only once. In 2014 I didn’t hear it at all from our garden. It’s the same this year, now 10 weeks after its normal arrival time. We don’t expect it to show this summer.

There are no physical changes to explain its absence, no new housing estate built, no switch to intensive agriculture – the fields I mention are not cultivated,  although other fields within an easy bird flight are, and treated I suppose with the usual cocktail of chemicals.

Although the bird hasn’t been calling from its usual spot, I have heard the cuckoo this year, less than than a mile from where I live. If this seems to contradict the gloomy message I’ve just given, there may be a clue in the location. It was just the once, on the recently created College Lake nature reserve, a place where wildlife is given free rein. But I am told that it has been heard regularly there throughout the 2015 breeding season. As you would expect, they don’t use chemicals, and the land is managed for wildlife.

What came first,, the decline of host species such as the meadow pipit,  or the cuckoo itself?  Did the cuckoos turn up, find no nests in which to lay their eggs, and move on?  Were they around in equal numbers elsewhere? I fear not. The British Trust for Ornithology (BTO) says the UK has lost over half the number of cuckoos in the UK over the last 20 years.

One theory is that the irregular arrival of spring affects some birds’  nestbuilding and egg laying. Some years they may be nesting earlier, too soon for the arriving cuckoos. Other years they nest late. Or perhaps something  weather-related, or quite different, is happening on the bird’s migration route.

Idle bar-room speculation won’t give us an answer. But the BTO might. Since 2011 it has fitted trackers to more than 50 cuckoos in different places in the UK to find out why their numbers have fallen so sharply. Already it has gathered abundant data about migratory routes.

The birds appear  to follow two distinct flight paths. One is through the western Mediterranean, through Spain, Morocco and West Africa; the other is down through Italy and across the central Sahara.

The BTO has also been able to show how early in the summer it is leaving the UK.  We know the bird stops its regular calling quite early – “In June I change my tune; In July away I fly.” But now we know for sure that their departure takes place as early as late June.

That is bird watching watching at its most sophisticated  and scientifically valuable. What can the individual do, apart from lament? The BTO invites us, after texting a (voluntary) donation to help it learn more about why cuckoo populations are declining, to join BirdTrack, and simply report Roving Records.

These are simple, one-off records of birds seen or heard whilst you are out and about. Simply enter them into BirdTrack.  The BTO will crunch the numbers.

Something is happening to cuckoos, and lots of other birds. It’s a bit too glib  and obvious to say we must and can do something, but it’s a consolation at least that just as things are turning bad, scientists, and the rest of us, are better placed than ever to study where birds are  and where they are going.

It may even help us  to save them.