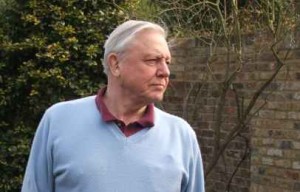 Sir David Attenborough: dire warnings on climate and the environment

In May this year (2015) President Obama welcomed  broadcaster Sir David Attenbrough to the White House for a televised discussion.

In the interview, broadcast in the UK and US , Sir David asks the President why he cannot show a commitment to tackling climate change in the way previous presidents strived to put men on the moon.

Obama responded: “We’re not moving as fast as we need to… What we’re seeing are global trends that depends on the entire world working together, and sadly we haven’t made as much progress as we need to on climate change.”

“I believe [if] we find ways of generating and storing power from renewable resources we will make the problem with oil and coal disappear,” Attenborough told Mr Obama.

Sir David Attenboirough made State of the Planet at the start of the Millennium. It was screened in 2000. He repeated the message about our need to improve our custody of the natural world about us, with greater urgency in the last part of Frozen Planet in 2011.

This extract is edited from my book, David Attenborough – Talking to a Great Broadcaster, available for download on all platforms – here.

WHEN Sir David Attenborough first reported on the wonders of wildlife in the 1950s and 60s, with his inimitable, joyous enthusiasm, the world was a simple place, as black and white as his films.

We faced great dangers, but they came from the politics of a turbulent post-war era. Nuclear conflict was the major threat to our planet, and we turned to nature programmes, to the innocent, untroubled world of wild creatures, as a balm.

We now know a time bomb was already ticking in Paradise. But even Sir David couldn’t hear it, above the sound of the surf breaking around exquisite tropical islands and the glorious dawn chorus of the rain forest, as he filmed nature in its utmost variety and abundance for his great Life trilogy.

“We had no idea what we were doing to the climate – none. Yes, there were problems, but we thought it was individual species we had to save, like the rhino and the Hawaiian goose. And, in a rather naive way, we believed the way to do it was keep them in zoos.” The Cold War ended, the threat of nuclear annihilation receded, and realisation finally dawned in the early 1990s that something was seriously amiss with our world.

“We now recognise that the apparently isolated problems we had witnessed in decades past were simply the tip of the iceberg. The threatened species we could see were indicators for the health of the whole environment.”

In State of the Planet, screened in 2001, the man whose indelible zest has done more than any broadcaster to covert us to the world’s natural marvels, delivered the (then) definitive warning that we stood to lose them. The series presented the most powerful evidence yet, gathered from the world’s top experts, that the planet was heading for a sterile, uncomfortable future if we humans don’t change our ways and tread more lightly on our world.

His analysis was chillingly succinct. Mankind is just too recklessly successful. Too many people, taking more from the world in energy and resources than it can afford to give. We are polluting our environment, depleting its natural habitats, altering its climate. “The damage is accelerating. It seems almost too much to hope for that major species will not go extinct in the next 10 to 20 years. It could be the tigers gone, the plains of Africa depleted. That’s our choice. And it is not just the fashionable things, not just apes and giant pandas but Life with a big ‘L’. We will lose creatures we didn’t even know were alive.”

I 1999 I met Sir David on Easter Island. He was there to film Lost Gods (shown in the spring), and also to shoot the most telling sequence in State of the Planet. We know this solitary volcanic Pacific island for the eerie mystery of its statues. But it is also one of the planet’s most complete symbols of environmental catastrophe – scoured, exhausted landscape, every last native tree felled, every bird and animal extinct. It looks more like Pembrokeshire in November than the Pacific.

“The statues are vivid evidence of the technological and artistic skills of the people who once lived here. But as the islanders felled their trees they no longer had timber to build sea-going canoes, first to fish and then to escape. A rich, fertile world in miniature became a barren desert.”

The analogy is inescapable: Easter Island as Planet Earth in microcosm, lost on the endless Pacific with no hope of escape for its people, just as we are adrift in space, condemning our successors to an impoverished future. Could this be the outcome for us – not a nuclear desert, but an ecological wasteland? Man will survive, through his technological might, but in a barren world bereft of the dizzying variety of nature?

“I don’t myself believe there is going to be an immediate catastrophe, like a huge world wide famine. But I think that things will go on getting worse, and that we will lose species after species after species, and the time will come in 50 years when we will look back – perhaps as they did on Easter Island – and realise that we have decimated our wildlife and think ‘Why didn’t we do something before?’”

I asked Sir David if there was a single event, some warning signal like that shudder in Jack Lemmon’s coffee in the nuclear power station melt-down in the movie China Syndrome, which finally convinced him something was seriously wrong with the world? “Interestingly, there was not. My job is to go and photograph wildlife; so I have gone to where wildlife is, and not where it isn’t, or from where it has recently disappeared.

“I wish we could say to the audience: ‘Vote for this action and the problem will be solved’. There no such action. There is no big fix. “All I can say is it involves everything we do – permanently, forever. How much energy you use in your car, where the wood comes from in the furniture in your house. It is about what the World Bank is doing, what political party you vote for. In the end it’s a kind of morality, a conservation morality that is required.”

We expect a glowing, golden sunset finale in Sir David’s films, but not this time. “I’m not particularly optimistic. I don’t think the situation is going to get better. It’s going to get worse. The question is – a lot worse, or a little worse? I think if we all work very hard it will get only a little worse, instead of a lot worse.”