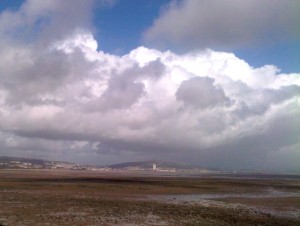 Swansea Bay; tidal lagoon to power the homes of the entire city

I am immensely proud of my hometown, Swansea. If all goes well, by the end of 2018 a six-mile long wall will loop out from the seafront, like an oddly inflated balloon, to define the world’s first energy-generating tidal lagoon. Turbines at the outer edge of the lagoon will capture the energy from the tide as it flows in and out, and generate enough power for all the homes in the city, about 144,000.

The UK government gave planning permission this week (June 9, 2015), which makes it likely that the £1bn scheme will go ahead. There are are difficulties ahead, as a good balanced article should always say. (It needs a guaranteed price for that, initially, very expensive electricity, and the impact on the environment and migratory fish must be measured). But the Swansea Tidal Lagoon has the very best of allies, none other than Chancellor of the Exchequer George Osborne, who mentioned the scheme by name in his March Budget in 2015.

Fortune favours this brave project. It comes just as the government moves to phase out subsidies for onshore wind turbines, one of its election pledges, and to make it more difficult for solar farms to go ahead by enabling local people to reject them.

To meet its statutory Co2 reduction targets, the government needs some significant fresh way to generate renewable energy. Enter Tidal Lagoon Power (TLP), with its proposal for five tidal lagoons on the west coast of Britain. Here is a technology that can be sold to the people who don’t like the big swishing blades of turbines and the monotonous sparkle of solar panels, they would say, smothering our fields.

Swansea has always struggled to keep up with Cardiff, the Welsh capital, 45 miles east. Cardiff has the fine civic buildings, the HQ of Welsh rugby, the Welsh Parliament building and the wonderful Millennium performance centre. It has a nearby airport and is closer to London than its rival.

As for Swansea, it always suffered from being several stops further on by train. Its heart was torn out by German bombers in 1941. It had already endured the immense blight of the Industrial Revolution. Copper manufacture in the then town (it was not even a city until 1969) made it, for a time, one of the most polluted places on earth, and the dereliction lasted into the 1970s. Unlike its neighbour, there was little built legacy to compensate for this, and nothing like the grand late-imperial structures put up in Cardiff.

Among its points of distinction are Swansea’s now established place in the “English” football Premiership, and its connection to Dylan Thomas, born and raised there, and whose reputation was significantly enhanced in his Centenary year, 2014 by the city’s hard work. And it was in Swansea, in 1968, where Garfield Sobers became the first cricketer to hit six sixes in a six ball over.

210 years ago Swansea opened one of the world’s first passenger railways, the Mumbles Railway, whose amiable trams trundled the five miles around the curving bay. In 1960 the insensitive transport authority tore up what was by then the longest surviving passenger rail system in the world. What a tourist attraction that might have been today.

So Swansea has its second chance to lead the world, with a “game-changing” pilot project to guide others and trigger a potentially world-leading industry in tidal energy.

There are awkward issues to be resolved. A government subsidy for the power generated, higher than for wind turbines, solar power and nuclear, has to be agreed. The developers must produce an updated validation report, to convince the government that the technology is workable. Concerns about silting and potential impact on fish have to be addressed before a marine licence to allow the lagoon to be built can be issued. But if these questions can be successfully answered, work could start in March 2016, and the project could be operational by the end of 2018.

The scheme could provide big benefits to the local economy, creating jobs both to build the barrages, and to make its component parts locally. Then there is the lagoon as tourist attraction.

Plans include a bicycle way, pedestrian path and perhaps an electric train running along the top of the barrage. The calm waters within the walls would be suitable for yachting, and other watersports. The promotional film anticipates serious sporting contests, one of which could be the triathlon.

The lagoon could also be used for underwater cultivation – mariculture. One suggestion is to revive local production of oysters (Oystermouth is one of the villages on Swansea Bay) and also to grow samphire.

This is a feature of which Swansea could be proud, destined to last 100 years. It would bring the city recognition around the world, an elegant extension of Swansea’s splendid curving bay, which Victorian writer Walter Savage Landor compared to the Bay of Naples, and to Dylan Thomas’s “ugly, lovely town”.