This is how to put a price on nature. If landowners and developers want to build houses in beautiful, open countryside, they must compensate for the loss of habitat and wildlife by providing a piece of land of equal or greater size nearby, then pay to manage and enhance it so it becomes as ecologically valuable as the land that was lost.

That’s what should happen (and in some places is already happening) at local level, according to Prof Dieter Helm, who spoke at the Hay Festival in May 2015 to outline the concept of natural capital.

For a national example of this proposed new way of valuing and protecting our environment, consider the HS2 project. The high-speed rail link will cost around £50 billion. It will do a lot of damage to precious habitat, including irreplaceable ancient woodland.  There should be, built into the cost, compensation of around £1 billion, says Helm, paid out to create habitat to balance what will be destroyed. 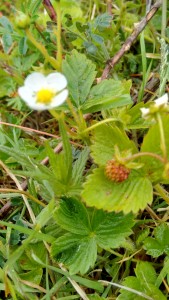 Wild strawberries – food for free and part of our natural capital

Helm, who is Chair of the Natural Capital Committee, gave these two examples to the audience at Hay, where he was  promoting his new book Natural Capital: Valuing the Planet. But providing “significant” areas of land to make up for the inevitable damage to wildlife and habitat that is bound to come as we seek to accommodate a growing population is only part of a much bigger vision, proposed by Helm in his book.

First let’s attempt a definition. Natural capital is nature’s wealth, its infrastructure – the woods and forests, river systems, wetlands,  meadows, and the wildlife  and other assets they sustain –  provided, for nothing, by the world about us.

They are resources, some sustainable, some finite, that feed into the production of all kinds of goods and services,  which might be building sites for homes in the country, the sustenance provided from naturally occurring fish in the sea to the energy that comes from non-renewable assets such as oil and gas.

A 2012 study by The Nature Conservancy and the Corporate EcoForum  in the US estimated that the environment provides $72tn a year of “free” support to the global economy.

That is all in the profit column. On the debit side is the cost of using up these natural resources, which one report estimated at around $6.6tn a year. That figure could climb climb to $28tn a year by 2050 if we fail to take action  to conserve and enhance those natural assets we have.

Those are some of the few figures I managed to extract while researching this article.  And that’s why Helm’s talk at Hay, and his book, may be so important.

Helm, Professor of Energy Policy at the University of Oxford, has chaired the Natural Capital Committee since it was set up by the Coalition Government in 2012. Its role is to advise the Government on how to ensure England’s ‘natural wealth’ is managed efficiently and sustainably. It reports to the Economic Affairs Committee, chaired by the Chancellor of the Exchequer. but at the time of writing with a guaranteed existence only until September 2015.

Despite its near invisibility, its function is one of the most vital carried out by any government-created  committee. It is to put a price on the natural world around us, and attempt to come up with a mechanism to sustain it, and end and even reverse the enormous damage we are doing as we build houses, put more traffic on the roads and generally invade the natural world around us.

The book amplifies that ambition. The publishers say it is “the first real attempt to calibrate, measure and value ‘natural capital’ from an economic perspective” with the environment placed at the very core of economic planning.

The thinking may be radical, but the strategy is couched in straightforward accountancy theory that Treasury officials can easily grasp. It is to draw up a balance sheet of natural capital, just as accountants would when they list a business’s assets, of all those things the environment gives us for nothing, that are valuable to us, directly and indirectly. In effect, a new type of GDP, a framework for sustainable growth.

The idea of making the polluter pay, and compensating the environment for the damage inflicted upon it is not so new.  There has been piecemeal treeplanting around new housing schemes for many years, and we are used to seeing habitat creation alongside new roads to absorb some of the fumes and noise from the  traffic using them.

As he outlined in the HS2 example above, Helm calls for much more than green tokenism. You can get an awful lot of habitat for £1 billion in exchange for a high-speed railway.

He said we have lost too much biodiversity and environment, and we can’t sustain that loss. We cannot let the aggregate of our natural capital be reduced any further.  From now on, when we damage  the environment, that loss must be made up with  “serious compensation”, with the creation of “whole systems” such as  the proposed  River Thames Catchment wildlife corridor.

And the land we use for building isn’t the only thing we will have to pay for. We must compensate for the carbon we push into the atmosphere, the vehicle pollution pumped into urban streets, the damaging pesticides and nitrogen  farmers  put on their fields. The price we pay for pollution will have to be embedded in the product.

Helm said  the task ahead needs a 25-year-old national plan, broken down into five year sections. But that will be up to the government, which has yet to say if the Natural Capital Committee will be made permanent.

The Spectator noted that environment minister Liz Truss “has the opportunity to re-establish the party’s nature conservation credentials. She can supercharge the work of the Natural Capital Committee, under the inspired chairmanship of Dieter Helm.”

As for David Cameron, “he has the chance to make environmental stewardship part of his plan for better lives and a stronger economy.  The question is whether he will take it.”