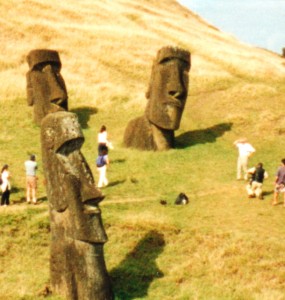 In 1999 Sir David Attenborough visited Easter Island, but not for the obvious reasons of observing wildlife. The film he completed there was The Lost Gods of Easter Island, shown in 2000. I was fortunate enough to join him on the most remote inhabited island on earth.

I write about that visit, based on my travels with Sir David around Easter Island and my talks with him in my article published in my e book David Attenborough – Talking to a Great Broadcaster. It is available on Kindle for $1.99, or £1.29 in the UK. Click here

This is a taster from the book:

For the first time in a long and celebrated life of travel, Sir David Attenborough is on Easter Island.

It is a notable landfall. He has arrived on this speck in a vast ocean like some patrician, keen-eyed bird of prey, carried in on a fortuitous Pacific wind. He is soon recognised by the few tourists who are visiting this far-flung place. But if they think they know why he is here, they are wrong.

For once he has not come in search of wildlife. There are far better places in the Pacific, and he has been to many of them. “This is the most remote fragment of land on the surface of the globe, and not surprisingly there are not a lot of animals here. The only indigenous creatures are a few birds blown over from South America, 2400 miles away. There are some pipits and sparrows introduced later, and a few insects. So there is nothing here from a zoological point of view that you couldn’t get elsewhere, with a lot of other things as well.”

Is it the statues, then? Certainly the mystery of some of the world’s most readily recognised sculptures, and the fate of the reckless society that created them while destroying its own environment, are central to anything you say about this strange place. The island’s ecological nosedive is a chilling metaphor for what happens to a people who mess up their world and ignore conservation. All these elements play an important part in his story.

But they are not his main purpose.

The great naturalist is here as…detective.

With the tenacity of a Lovejoy, he has teased out the provenance of  a strange wooden statue he bought 20 years ago in New York. After following leads in St Petersburg and Australia, he is here to film the final, conclusive pieces of evidence…