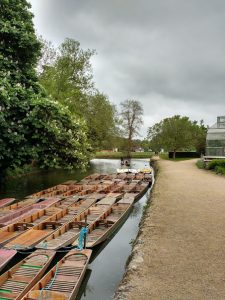 Transport at its most serene in often-congested Oxford

The sensible way to reach the centre of Oxford if you are driving there is to park at one of the three “park-and-ride” facilities on the edge of the city and take the bus in. The city introduced this facility more than 20 years ago and, most of the time, it appears to work.

But people still use their cars in the city – residents as well as visitors and commuters – and there are times of day when traffic overwhelms the old roads leading into the centre. The park-and-ride buses use bus lanes to avoid some of the gridlock, but there are certain pinch points where they just have to join the queue.

These are the details of our routine night out in Oxford yesterday. Arrive at Thornhill park-and-ride just located off the A40 and close to the M40 at 5:16 PM. Park-and-ride buses run every 12 minutes, but nothing turned up until 5.45. We finally arrived at our restaurant table, booked for 5.45, at 6.16.

The late arrival didn’t spoil our evening – we made it comfortably to the nearby theatre by 7.30. But had we left it any later, we would have been in trouble.

My point is that using the private car for an evening out, in conjunction with public transport is now a flawed strategy in many older towns and cities. I realise that is a bit of a generalisation, but I’m sure my recent, random, experiences of gridlock in Aylesbury, Leeds and Watford are not so unusual.
Park-and-ride really does help, where it is available, but it will only take you so far if the roads are still clogged with traffic. There is some congestion relief yet to come in some towns and cities from new feeder roads and bypasses, but there’s no evidence that they solve congestion in the long term.

There’s radical relief in prospect perhaps 20 or 30 years from now from freely-available self-driving cars in some kind of shared system that will encourage people in towns and cities at least to give up their own vehicle, but it’s far too early to foresee how that would work and reduce urban congestion.

A network of trams running on lines with priority over the car, a model which is widespread across Europe, must remain no more than an aspiration in the UK. This is too expensive an option to contemplate, and the further congestion in narrow open roads would be politically unacceptable.

Oxford is fortunate. In December (2016) the last link in the railway from London’s Marylebone station will open, completing the first new line from the capital to a city in a hundred years. (The project is not as ambitious as it might sound. Most of the line was already in place. All that was needed was to enhance the track in some places, and to build some short links. But it is still a bold initiative in a culture of modest, slow to deliver projects.)

How will this make it easier to have a night out in Oxford? People travelling in from the south and east, from Thame, Aylesbury, High Wycombe and London, could leave their cars at one of the stations along the line and take a train directly into the city centre.

There’s nothing new about this sort of journey choice, so why do I even mention it now? Because I think in the past few years urban congestion has become so serious, that we have to think harder about, and talk up, the public transport alternatives whenever we can find them. People I, and you, know are so conditioned about using their cars even to the bitter, congested end, that they close their minds to other ways.

The public transport in many European cities is magnificent. In this country it is often disgraceful. Politicians, in general (Nottingham, with its tram system is a rare exception) will not make the brave choices and limit car use in urban areas, and invest more in public transport.

We should applaud the new railway service into Oxford – not to be confused with the existing service on a different line from Paddington Station – for the significant public transport improvement it will be. After our frustrating experience in the South Oxford traffic jam last night, the coming prospect of leaving our car at, say, Haddenham and Thame Parkway and taking the new fast train to the city centre is very appealing. I just hope they don’t stop running before the theatre performances finish.