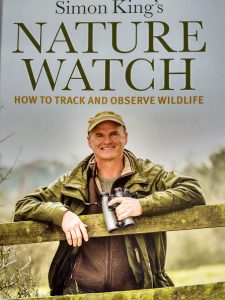 NatureWatch – How to Track and Observe Wildlife, by Simon King

A lot of people, me included when I worked for Radio Times and spoke often to Simon about his TV wildlife programmes, used to nominate him as the next David Attenborough.

That was more than 20 years ago, and I am happy to say David Attenborough doesn’t need to be replaced as he is still working. Besides,  Simon is too busy being the present Simon King.

Other TV personalities go off in search of wildlife. This master naturalist already knows where to find it, all over Britain. This is his very own territory, although he has also worked abroad, particularly in Africa.

As he says in the introduction to his book, NatureWatch – How to Track and Observe Wildlife, he took a passionate interest in wildlife from his early years, searching for insects and toads at the bottom of his garden, and then in the woods and rivers around the family home in south west England, where he would watch kingfishers, sparrowhawks and foxes.

Hard to believe now, but he’s been trailing, photographing and filming wildlife through five decades.

Any recorder of wildlife, even prominent wildlife photographers, can sit in a hide and wait until that rare big cat or elusive bird pads or flutters by. Simon applies the far older discipline of field craft, where you learn the ways of your quarry, and how to approach with infinite stealth, without disturbing it.

In this book, illustrated mainly with his own, often gripping, photographs (the osprey on page 215, for example), Simon gives us the key to nature’s door, the clues to “move, look and listen with fresh and heightened senses.” Follow his expert guidance and the door to the wide, wild world will slowly swing open and “you find yourself surrounded by wonder, beauty, drama and pathos.”

There’s no direct conservation message in this book, (although he makes clear the negative impact of an alien species such as the American mink)  but there is an implicit one. Wildlife is a glorious thing, and by watching it and communicating it with it and respecting it, we are more likely to protect the birds, plants and animals around us.

We are, correctly, in thrall to those wonderful wildlife programmes about some great distant jungle hunter. But read Simon and you can see wildlife drama played out in your own garden, if you have one.

So what is that wren doing, giving its urgent alarm call, like the turning of a tiny rattle in the bushes? It could be that it is aware of a nearby sparrowhawk. “If spotted by other birds, sparrowhawks elicit very strong predator alarm call responses.”

Now from the sparrowhawk’s point of view. ”They adopt at least three distinct hunting techniques: the search and drop, often referred to as hedge-hopping; low-level surprise and perch hunting. Some of the most protracted views occur when these hawks target a meal in your own back garden.”

His descriptions are vivid and precise: the dipper for example – “often all you see is a dark, dumpy bird on whirring wings flashing past you at speed, just centimetres above the waters surface.”

Sometimes droppings are a big clue, as in the case of the otter’s spraint. “The closest common scent I have encountered to resemble it is European Ivy in full late-summer bloom, sharing the sweet, musky, heavy order the otters scent mark.”

Many of us will be content simply to watch, and go no further than, for example, hoping to spot a barn owl late at night in a car as we drive on country roads. But in case you want to take your fieldcraft further, Simon has three detailed pages of advice on how to watch the bird. He managed to get one to hover just a couple of metres over his face when he imitated a field vole’s squeak.

That specialist knowledge comes in handy, too, if you wanted to attract a weasel. So lie flat on your back in the right area, facing the sky, and mimic the vole, “a short sharp kissing sound”. He  advises you to perfect your squeak by listening to a recording online.

Simon conveys a compelling sense of authority, which comes from having done it all himself. So you want to see a nightjar. He has a way of attracting this rare and elusive bird. Wave white hankies, one in each hand. Although, challenging his own hypothesis, he concludes that while a nightjar might be attracted this way, it is just as likely to fly close to an observer who is simply standing still.

He doesn’t comment on active protection. So, for example, we know the hedgehog population has been falling and the species is far less common than it used to be. But they are still with us. And Simon will help us spot one.

And there is nothing in the book about conserving the red squirrel or the harvest mouse or wildcat or stoat. But doesn’t just spotting one, maybe scuttling safely across the road ahead of our car, raise our spirits and connect us to the wild world, if only fleetingly? And strengthen our conservationist tendencies?

Although he does use hides – one photograph shows a comical little three sided structure that the Dad’s Army crew would have been proud to deploy to protect their town, another shows him comically, but effectively camouflaged, and indistinguishable against a background of brown grass and brambles.

Simon advises us on how to look, how to listen – identifying alarm calls, for example, and how to use peripheral vision (in his case it is about 178°). You can use that useful trick of “disinterested” observation, where you’ve seen a creature, but pretend you haven’t.

In short, he is asking us to relearn and reapply tracking skills our distant ancestors would readily have had at their disposal.

As for camera gear, recording wildlife needn’t be expensive. He regularly uses his smart phone to capture images with his telescope and binoculars, by simply holding up the lens on the phone to the eyepiece on the binoculars, and editing out the distortion around the image. “If the whole rig is kept relatively stable, results can be remarkably good.”

I would make a couple of poiints, more observations than challenges to Simon’s authority. He has a page on peregrines, which he describes as the fastest creature on earth – good to have that confirmed. This is easy if you know which town or city to look in – “there are many well-known peregrine nest sites up and down the country which can be observed using a telescope from a safe distance.”

I would merely amplify his instruction by saying the peregrines in Aylesbury, where they nest atop the County Tower, are exceptionally easy to see in the nesting season. They may be heard across the town centre, and seen as they sprint through the air around their nest. In this case, only the most basic field-craft is needed. I am always disappointed that so few people look up to see this avian marvel.

And the red kite, now ubiquitous in parts of southern England. Simon refers to red kite feeding stations, which still seem unnatural to me. Better still is to drive from Oxford to Aylesbury and just look out of the window.

These are minor points, however. I don’t think there’s anyone who can write about and photograph his subjects, with a wealth of personal and detailed knowledge, and who clearly cares so much about them, as Simon King. A delightful book.

NatureWatch – How to Track and Observe Wildlife, by Simon King, published by Quadrille, £20 www.quadrille.co.uk