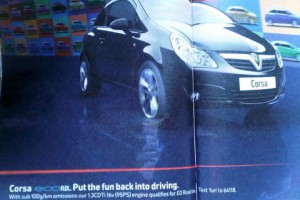 Now here’s a thing. The first double page colour advert in a national newspaper that I’ve seen selling a mainstream car (which is neither a hybrid nor an electric vehicle) with emissions so low the owner doesn’t have to pay road tax.

Granted the tagline to the advert in the Mail on Sunday’s Live magazine for the Vauxhall Corsa Eco Flex is “Put the fun back into driving”, not “Save the planet, and your wallet”, but it’s a very good start.
This car (1.3CDTi engine) returns a  combine mileage of 76.3 — that’s urban of 61.4 and extra urban of 88.3. This is very impressive, and about as good as you can buy today with a conventional car. With CO2 emissions of 98 grammes per kilometre, it comes under the magic 100 g/km threshold which exempts it from road tax, and let it off the congestion charge in London.

It’s a small car — 3 doors — and it costs £15,000, and for those who are interested it has a sporty look. Other cars are close, but it’s the first one I’ve seen advertised in the mass media that might be bought by people who don’t otherwise have a green agenda. Which, sadly, still means most people.