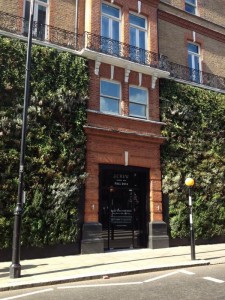 In the four years since I’ve been tweeting, by far the greatest interest in anything I have had to say came when I posted this photograph I took on Sloane Square in London in July 2014, with this message.

“J.Crew’s Bee Wall on its new store on Sloane Square, with Buglife, See more at: http://www.buglife.org.uk/news-%26-events/news/jcrew-partners-buglife-save-bees#sthash.mwzggfC0.dpuf … “

It was retweeted by15 separate accounts, but I take no credit for that.

People wanted to hear a positive story about helping bees. All I did was point and click. I’ve since been online to research the subject, and to see who else is setting up “living walls” to benefit bees and other insect life.

Buglife, a charity committed to the conservation of bees and insects, explains its partnership with J.Crew, a superior women and men’s clothing chain based in New York.

The two are working together to focus on bees, whose populations have slumped in the UK and many parts of the world. They want to show the importance of bees to flower pollination, and the benefit to the wider ecosystem.

J.Crew’s new premises on Sloane Square, in a late 19th-century building,  opens in September 2014. It features a vertical “garden” fixed to a barricade on the store’s facade. Created by TreeBox, designers of “living wall products”, and curated by J.Crew, the garden has been planted with bee-attracting flowers, such as myosotis, echinacea and lavandula. J.Crew’s existing stores on Brompton Cross and Regent Street will each feature a vertical garden within their windows, to celebrate the launch of the partnership with Buglife.

Buglife wants the wall to be part of a “Super Highway” of pesticide-free gardens for bees in London, although it seems J.Crew’s shop will only be a short-term stop, as it is to be taken down shortly after the launch according to one report.

However J.Crew will continue to sell products relating to Buglife’s cause in the store, and part of the the proceeds will be donated to the charity. They include a T-shirt designed by illustrator Emma Smith, featuring four hand-drawn illustrations of different species of bees.

J.Crew will give seed packs to every customer throughout 2014, and sell honey from Regents Park Honey Company, made in hives in and around Regent’s Park.

“Living Walls” are still rare in Britain, and when they are indoors they may not be of much benefit to bees. Among the best known to the public is the  green wall in the Westfield shopping centre, Shepherd’s Bush. Another eye-catching current example, and one of the first in a town centre, is the wall on the Marks and Spencer Simply Food store at Oswestry in Shropshire.

One of the newest, and tallest, external living walls is growing in Science Central, an innovation hub in Newcastle. The 85 feet-high vertical garden has been attached to the side of The Core, the first building on the complex. It contains ivies, seagrass, thyme, primulas, euphorbia, wild strawberries and nesting boxes.

The wall is part of a plan by Newcastle Science City, the partnership responsible for delivering Science Central, to create a top-class example of urban sustainability.

The 366 sq m wall contains about 35,000 plants. A series on rails was fixed to the side of the building and boxes of plants grown in the nurseries of living wall specialists ANS Group were slotted in, then linked to an irrigation system. The plan is to attract insects and small birds. The wall will also include distinct areas where bees can nest.

What is reputedly the world’s tallest indoor vertical garden was opened this year (2014) in the building of credit union association Desjardins in Lévis, Quebec, Canada. It was designed and installed by Vancouver design company Green Over Grey.

Growing on the 213 feet high, 15-storey wall are 11,000 individual plants. The wall is hydroponic (soil-free) and incorporates plants that thrive in similar vertical environments found in nature, such as on tree branches and next to waterfalls. A spokesman said the installation provides cleaner indoor air and improves both the acoustic quality and the value of the property. The 42 plant species include philodendrons, monsteras, fig trees, ginger, snake plants, elkhorn ferns, scheffleras, clusias and banana plants.

Airport buildings are another suitable site for green walls. They are generally high, with ample space for planting. Birmingham-Shuttlesworth International Airport in Alabama has partially greened itself with a 1,400-square-foot “welcome mat” teeming with the state’s native vegetation. Completed this year (2014), the 100-foot-long, 14-foot-tall living wall, on a corridor near Concourse C, is made up of 8,000 plants from 60 species indigenous to the state.