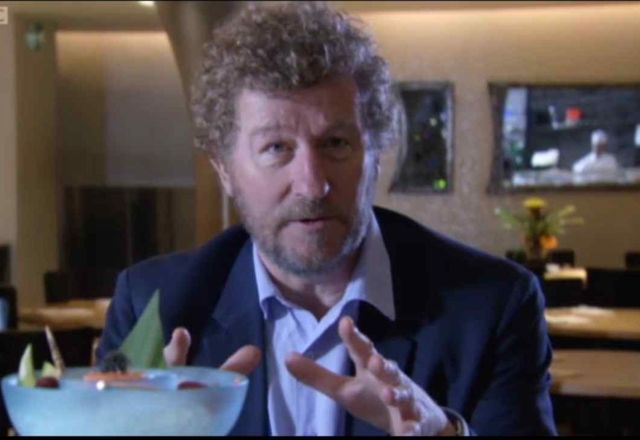 Part of the flagship BBC2 series Faulks on Fiction has been shot in a London restaurant which sells one of the most endangered fish species in the oceans. In the third part of the series presenter Sebastian Faulks is filmed dining in Nobu,  whose owner is accused by conservationists of helping to drive the bluefin tuna to the brink of extinction.

There is no suggestion that Faulks was eating bluefin tuna, nor are we suggesting that he knew about the campaign focusing on the restaurant. The question remains whether the  publicly funded BBC was wise  to choose  to film in a restaurant which   arouses such controversy  by continuing to serve a fish which  many scientists believe might be on the verge of collapse.

Faulks visits the upmarket fish restaurant to film an item on James Bond, one of the characters he chose to illustrate “The Snob”, the theme of the third part of his  popular prime-time series in which he  explores classic characters in literature .

Although the presenter does not refer to Nobu by name  on-screen,  and it isn’t otherwise identified, the restaurant is named in the credits,  and on the associated website. (There must be many other restaurants  in London where the tastes of the snob could be illustrated.)

On its website the campaigning organisation Fish2fork say this about Nobu:

“This restaurant chain seems unable to deal with the fact that some fish species, such as bluefin tuna, are so overfished that they are now officially listed as endangered. After five years of pressure, Nobu has thought fit to encourage its customers not to eat bluefin, while not actually taking it off the menu.”

Spawning stocks of Eastern Atlantic bluefin tuna are widely estimated to be down by around 75% in the last four decades, and some scientists believe they might be on the verge of collapse  – www.bbc.co.uk/news/world-asia-pacific-11692242. Fish2fork say: “Northern or Atlantic bluefin tuna is slow growing and long-lived, making it vulnerable to overfishing. Fishing on Atlantic stocks is currently unsustainable and stocks are below safe levels.”

Last year a proposal to ban international trade in Atlantic bluefin tuna, which is a sushi mainstay in Japan, was rejected by a UN wildlife meeting. A majority on an expert panel convened by the UN Food and Agriculture Organization to examine whether the Atlantic bluefin’s plight was severe enough to meet Appendix One criteria  (the top listing), believed it did, though consensus was not achieved.

Fish2fork is the world’s first website to review restaurants according to whether their seafood is sustainable, and not just how it tastes.  it places Nobu fourth from the bottom of the list of 421 restaurants After a campaign led by Charles Clover, who wrote The End of the Line and founded Fish2fork, Nobu agreed to add a line on  its menu informing guests that bluefin was a threatened species, “Bluefin tuna is an environmentally-threatened species – please ask your server for an alternative” – but the restaurant  persist in serving the fish. www.fish2fork.com