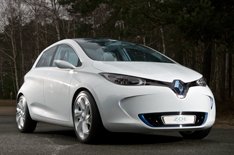 Could this be the breakthrough electric car?

Is the affordable electric car  (EV) finally here?  The Renault Zoe will be in showrooms by spring 2012,  just in time to be driven (congestion charge free, of course) through the streets of London to the Olympic Games.

It should cost around £12,000, although with an additional, unexpected, expense.  You lease the battery for around £70 a month (which is just £15 more than it cost me to put 44 L of petrol in my car last week), so you won’t actually own it.

This gets round the other electric car worry.  Apart from range anxiety, the other concern is battery life.  Well, that’s for Renault to worry about now. If your battery doesn’t last those multiple charges (and who knows?) then Renault will just have to give you a new one.

The Renault Zoe comes in at about half the price of the Nissan Leaf,  and that means we really are beginning to talk mass-market here.

What Car? has already driven  the Zoe, in its concept car state, and they don’t expect it to change very much before it goes on sale in 2012.
They refer to it its “cute styling and jazzy, yet practical interior”.

What Car? says it’s not fair to judge the driving experience of the production car on a hand-built prototype, but from previous experience the most remarkable thing about driving an EV is how unremarkable it is – “they’re peppy, quiet and good fun.”

The car can be charged from a 13-amp socket at home or through one of the increasingly common public charging points. They’re set to deliver a 30% charge in 10 minutes, 80% in half an hour and a full charge in around eight hours. The full charge is good for  “up to” 100 miles.

“What we can say about the Zoe is that it offers as much practicality as any other modern supermini, with okay space for four and a reasonably sized boot.”

The review concludes: “The golden age of EVs may not be upon us yet, but with cars such as the Zoe on the horizon, we get the feeling it’s not that far away.