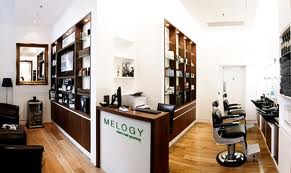 Melogy’s (de) parting message to the man on the Eurostar

Melogy has since closed. So I’ve amended my piece, below, to turn it into a kind of lament.

When the original St. Pancras Hotel opened alongside the Midland Railway London terminus 138 years ago, the cameras picked out a host of important and august men in top hats and frock coats.  But while their beards were long, their  hair was neat. We can assume the station barbers did good business that morning.

Railway stations are convenient places for the often spur of the moment attention men tend to give to their hair. Women book appointments weeks ahead, but (most) men don’t do forward planning on hair. We find a place close to where we are doing something else, then seize the moment. Stations work well. If we are taking the train somewhere, it’s not too hard to arrive a little early, and that’s the once in five weeks chore sorted.

I’m a minor expert on station barbers in the capital. I’ve patronised quite a  few over the years, following one business from Paddington station to Waterloo, then on to Marylebone.  Now I go to a place near Moorgate.

So I was delighted (in 2010) to hear that the splendid, newly restored St Pancras Renaissance Hotel was to have its own men’s hairdressers, not far from the buffer stops, under that majestic glass roof. Carmelo Guastella’s Melogy was not, however, your good old-fashioned red-and-white revolving pole barber shop. It is as far removed from the one-man establishment of the village of my youth, where we sat in mournful foreboding for an hour waiting for a scissors savaging that reduced us to near baldness, as a seaside B&B is from the Savoy.

Melogy was an unhurried place of consultations, and scalp assesment, where they dealt in moisturiser, exfoliator, eye gel, face wash and the salon’s own shaving oil made from 100% natural ingredients. In short,it seemed to be the new face of  masculine haircare.

Women’s near monopoly of concern about their tresses has always puzzled me. Men, too, have hair and even if you discount the many  who have little or nothing to cut, that still leaves millions of us. But it’s remarkable how little we talk about such a prominent and defining personal feature.

Never once over the years have I talked hair care or hairdressers with my men friends, and I imagine most men are like me. It isn’t a taboo subject, awkwardly concealed, as you might not discuss visits to gentlemen’s Soho clubs or  (in earlier times) street corners in Kings Cross. Hair is, or should we now say was, just too banal a subject for conversation. But was that about to change?

It may have started with Bill Clinton’s famous $70 haircut back in the 1990s. It sounded a lot, although wasn’t that what many women already spend on their hair? George Clooney’s perfectly groomed locks played their part in inspiring us to look beyond our routine trim. And there’s also the rare feeling of superiority the more genetically favoured have in flaunting the one thing we possess that the abundantly rich and talented Wayne Rooney lacks. Hair.

The market for male grooming (hair care just doesn’t cover the sector) is climbing steeply. World sales for masculine pampering products is projected to exceed $33.2 billion by 2015. Analysts put this down to the rapid rise of the “metrosexual male”, innovative products, a growing middle class, and the influence of the web feeding men’s growing self-esteem.

So I picked up Melogy’s brochure in its St Pancras salon and mapped myself around the new landscape. Carmelo Guastella, whose celebrity clients have included Sacha Baron Cohen, Gary Lineker and Rio Ferdinand, had set up a minor temple to precision hair cutting, skincare and cosmetics formulation with his team, artistic director Daniel Gregory and “Melogy expert” Miguel Gutierrez.

Carmelo found his vocation when he was 9, at home in Sicily. His father imparted the good sense of acquiring a skill that would allow him to earn a living. Visiting a friend’s father’s barber shop after school, he learnt how to hold a brush. By the age of 11 he could shave and cut hair. “I was financially independent” he told an interviewer. He cut hair in the army, passed through top hairdressing salons in Turin and came to work at London’s first men-only grooming spa, The Refinery.

Well before they lifted a scissors, the Melogy team consulted on the condition of the customer’s hair and scalp – let’s face it, men: did you even know it had a “condition”? – before they set to work using  “classic and modern techniques”.

There was even a hierarchy of prices, with Carmelo topping the list at £60, followed by Daniel at £50 and Miguel at £35. I didn’t tell my wife: she pays the same even when a junior stands in for her preferred cutter.

Now here’s a strike against the women . For another £40 Melogy added on a manicure while they cut your hair. Hair colouring is another service the modern self-aware man may not have realised he needed, but now probably wont be able to do without – “Subtle masculine shades help a man look his best at every stage of life” tempts the brochure

This is a railway station so they offered in-a-hurry services that did not even involve a cut. The Traveller was a “10 minute quick fix, for busy gentleman with little time to spare, before an important business meeting or train journey”. (I imagine Richard Hannay could have done with a brisk St Pancras refresh before setting off on his adventure in the north in 39 Steps.) “[We] shampoo, condition and style your hair. Stray hairs from eyebrows, ears and neck removed.” (£20.)

Traveller II (also 10 minutes) addressed the other end of the journey. “After a long trip (or late night on the town), [to] wake you up and revitalise you, with hot towels and premium products.”

How to manage designer stubble, the young-to-not-so-young-man’s face covering of choice (stubble is up to a week’s growth of hair, a beard anything longer)? Whatever side of the seven day divide your face falls, they have a strategy. The Shave Experience combined “The Expert Shave” and an express facial; Carmelo credit on beard design and shave, eyebrow shaping – “keeping eyebrows in good order gives your face a cleaner, more defined, masculine look“ – and even threw in shaving lessons – “tailored to your individual skin type: many men find it hard to achieve a truly smooth finish.” £80.

Grooming packages for the customer with a bit more time to self indulge included the Milano and the all inclusive Palermo: with this, for £125, you get haircut and consultation, expert shave, and premier scalp and hair treatment from Carmelo.

And here’s another step on the road to male equality, bespoke wedding services for grooms. Women routinely build the full hair experience into their wedding plans. Melogy offered a free consultation, long before the day itself, “on how to achieve the perfect look”, backed up with a personalised package “to fit his needs and requirements.” They extended the service to male friends, ushers and family members.

It’s a long way from the days when you had two choices: short back and sides (various degrees of severity), or the full US Army crew cut. And for those who could afford such a quality service as Melogy’s, there may be no going back.