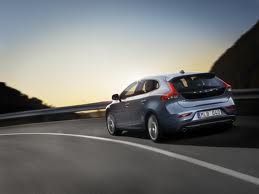 I just received a 6498 word e-mail from Volvo on their new five-door, five-seat hatchback, the V40, which was launched at the Geneva Motorshow on 6th March. That’s the size of quite a long magazine article.

The company has an awful lot to say about this new model.  At first I thought this was going to be in the familiar, bland PR speak: “Luxury look and feel…emphasises the aura of a compact car with large-car characteristics”. My heart sank. There was more: “Fully developed according to our human-centric, Designed Around You strategy…class-leading set of high-tech features”.

I think car companies concentrate too much on polishing the self-esteem of the driver (I suspect that is mainly men drivers) and not enough on the far more vital issues which copywriters still feel are not important enough to put into the adverts. So even Volvo’s people slip in a “a twin-coloured rear diffuser, a striping kit and enlarged rectangular, chromed twin tail pipes and seven different mood light options”.

Apart from comfort and reliability (scarcely a concern these days),  which anybody would want to look for in a car, the two things that really matter are fuel economy and safety. And this is where Volvo does set itself apart from many other manufacturers.

Volvo has addressed economy very well.  The D2 version (diesel) of the V40  comes with CO2 emissions  “as low as 94 g/km” (grammes per kilometre), which exempts it from the congestion charge in London, with fuel consumption of 78.8 mpg.

You would expect a car of this price (around £20,000) to let you use a smartphone to keep in touch with it. Other manufacturers offer such things in pricier cars too, and it  should not be long before they are standard in all new cars. But Volvo is doing it now.

Features include (and you can do all this remotely, on your  smartphone screen): having your car ping up on a map if you misplace  it in the street somewhere; being able to check if you have closed the doors and windows; performing a “health” check, calling up information about lights, oil level and oil pressure; and checking detailed data of an trip during the last 40 days.

The real nuggets, it seems to me, are lower down the press release.

I pick out the following:

So we find out that  all engine versions have start-stop and braking energy regeneration.

Then there is an  impressive list of safety aids. A radar-based Blind Sport Information System informs the driver about vehicles in the blind spots on both sides of the car.

Cross Traffic Alert uses radar sensors at the back of the car to alert the driver to crossing traffic from the sides when reversing out of a parking space.

Road Sign Information, via another camera, displays upcoming road signs in the instrument display. The driver is given a visual warning in the speedometer if the speed limit is exceeded.

Pedestrian Detection is activated if somone steps out in front of the car. If the driver does not respond, the car automatically applies the brakes. If the car hits the pedestrian, sensors in the front bumper  trigger an external airbag to inflate and cover the  front of the bonnet  and part of the windscreen area, to help reduce injuries.

Something called iCity Safety keeps an eye on traffic in front, using a laser sensor. The car automatically brakes if the driver fails to react in time when the vehicle in front slows down or stops, or if the car approaches a stationary vehicle too fast.

Driver Alert Control  consists of a camera, a number of sensors and a control unit. It checks if the driver, possibly drowsing off, is drifting towards the lane markings. A warning sounds and a text message appears in the car’s information display, displaying a coffee cup symbol to advise him or her to take a break.

Pretty well every car has a airbag. The V40 includes a knee airbag as well.

These miniature cameras, sensors and radar systems are not so expensive these days. Volvo seems to be taking this part of motoring very seriously in what is not such an expensive car. Volvo is deploying it in its tough fight in this particular corner of the car market against its rivals Mercedes-Benz and  Audi.

So is it up to us, new-car buying motorists, to insist these features become standard?  Or should the manufacturers just go ahead and fit them anyway?