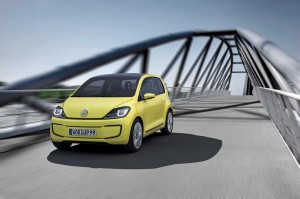 Another argument against the electric car is about to fall. It’s the “Ah, but electric cars are just as polluting because they use electricity from dirty old coal fired power stations” criticism.

True, up to a point. Although detractors forget that electric cars don’t emit any noxious gases, so are clean at the roadside.  But now electric drivers can proceed with an entirely clear conscience.

Three years on from the launch of the first electric car, the Nissan Leaf, a vehicle manufacturer has introduced the first purchase package to include a fuel deal with an electricity company that produces guaranteed 100% green energy.

People who buy Volkswagen’s electric e-Up and e-Golf, available from 2014, will be able to purchase the power from British company Ecotricity. VW describes it as the first crossover partnership of its kind in Britain between a car company and an energy company,

Volkswagen will make the offer to all customers purchasing an electric vehicle from its Volkswagen and Audi brands. Details of the scheme are still scanty, but what this probably means is that  customers pay a certain sum for the electricity to power their cars, and Ecotricity feeds an equivalent, additional amount of carbon free-power into the grid. New, green energy will be generated, even if it doesn’t, technically, reach the plug which powers that particular car.

Ecotricity’s wind and solar mills generate clean, green energy. In 2013 the company exceeded 60MW of capacity from its own windmills.

The price of the e-Up is expected to be around £17,600, after the government’s £5000 electric car grant, making it one of the cheapest e-cars on the market. The cost of the electricity from Ecotricity has not been announced. The bigger e-Golf will cost more, near to the price of the Nissan Leaf.

Volkswagen will take orders for its e-up in November (2013), with the first deliveries in January 2014. The company is hoping the car will help it realise its ambition to gain market leadership in electric vehicles by 2018.
Ecotricity was founded in 1995, and claims to be the world’s first green energy company. It now powers 75,000 homes and businesses from its growing stable of wind turbines. Its first large scale sun park is now generating power in Lincolnshire.