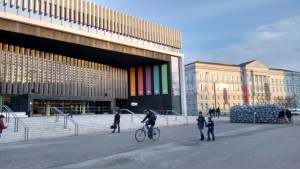 Over many visits to European cities,  I’ve concluded that two things set them apart from similarly-sized places in Britain.  One is public transport. The other is a commitment to culture, and in particular music.

We hold our own in fine historic buildings, and archeological remains. It’s when we look at the creations of planners and politicians, usually publicly funded, that the very clear gulf in ambition and aspiration between Britain and Europe shows up.

There is a long list of quite modestly sized communities in Europe that have  excellent public transport systems, with smooth, slick trams  prevailing over the car in urban centres. This makes them more pleasant, and convenient  places to visit than many a car-clogged UK urban centre. Angers and Le Mans, Basel and Freiburg, are excellent examples.

There is research to show that good Metro and tram systems improve the quality of urban life,  and stimulate economies. The fact is we have too few in the UK.  Over the years we haven’t invested in the sort of good urban transport infrastructure common in Europe, although it’s increasingly likely we will have to do so in many towns and cities if we want to solve widespread urban traffic congestion.

When it comes to the arts, politicians can with more justification argue that, for example, building a new performance centre, is an optional  luxury, a provision towns and cities cannot afford in times of tight constraints on public spending. However this is still an argument more likely to prevail in Britain than in many parts of Europe.

The Austrian city of Linz is a shining example of an attitude which elevates the arts, and in this case opera, to a place in public life which, I feel, it could never enjoy in Britain, outside London, and a few large conurbations such as Birmingham and Manchester.

In 2013 the Musiktheater am Volksgarten, a purpose-built opera house, opened in the city.  It was designed by British architect Terry Pawson, and cost €180m ($237m). €170m came from  public funds.

Linz is a city of around 200,000, so a good comparison would be with the city of York. Imagine York and its region funding a new, dedicated opera house with 200 productions a year, often with two separate operas the same day, and being so artistically daring, and acoustically advanced, it can even support performances of Wagner’s Ring cycle.

There is an even better comparison to make. Take Edinburgh, a much bigger city. At least it has a tram line. It opened in 2014, born out of political acrimony. Although much more modest than originally planned, it is an asset to the city. Edinburgh does, of course, have the celebrated International Festival and Fringe, whose performances are staged in many venues across the city. But it lacks a dedicated opera house. As does Glasgow. Both stage performances by Scottish Opera, which tours throughout Scotland.  Admirable though that is, I imagine that if Scotland were a central European country, it would have a  purpose-built opera house and a theatre. It Isn’t only Scotland. Wales, Land of Song, has  only – and I admit it’s a big “only” – the Millennium Centre.

Tony Pawson’s practice won the commission to design Linz’s Musiktheater am Volksgarten, one of Europe’s most technologically advanced opera houses, by proposing to move a busy road to run around the rear of the building, so that it opened directly on to a run down park.

In the entrance a grand staircase leads from foyer to first floor, as it might in a traditional house such as the Paris Opera or the Staatsoper in Vienna.  A notable feature of the main auditorium, and instead of the traditional chandelier, is a giant disc in the ceiling, containing 24,000 different-coloured LED bulbs, used in lighting for shows.

As for the audience, lines of sight are excellent. If you book online, you see an exact view of the stage from your seat.

A UK house might stage a dozen or productions in a year, played in succession. The Musiktheater’s resident orchestra, the Bruckner Linz Orchestra, under the American music director, Dennis Russell Davies, puts on a different production every day; sometimes it presents a different production at a matinee performance from the one it stages in the evening. There are 220 home-produced performances each season—only slightly fewer than Vienna State Opera,

Houses of this size normally lack the space to stage large-scale opera. An orchestra cannot produce the acoustic volume. This house has a zone around the sides of the auditorium which provides the necessary greater resonance, which has allowed it to stage Wagner’s mighty Ring cycle.

The Musiktheater has been playing to full houses, which is even more remarkable, considering it is so close to long-established opera houses in Salzburg and Vienna.