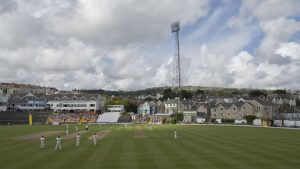 Garfield Sobers, by any estimation, was a genius. England fast bowler Fred Trueman described him as a “sublime left-hand batsman” who was “one of the greatest cricketers ever to have graced the game, certainly the greatest all-rounder”.

This is the sixth in a series of extracts I am publishing in the lead up to the 50th anniversary of the day, Saturday, August 31st, 1968, when Garfield Sobers became the first player in the history of cricket to hit every ball of an over for six. It’s taken from my e-book Sobers six hit perfection at Swansea: That was the Day

Richie Benaud described him as “the greatest all-round cricketer the world has seen”. Some of his innings are among the finest in test cricket. Sobers, wrote Benaud, was “a brilliant batsman, a prodigious slip fielder, particularly close to the wicket, and a bowler of extraordinary skill, whether bowling with the new ball, providing orthodox left-arm spin or over-the-wrist spin”.

But his most effective bowling style was fast, off a loose, springy run, followed by a “whiplash” delivery. Using the new ball, he made the delivery curve late in flight at high speed.

Fred Trueman described him as a “sublime left-hand batsman” who was “one of the greatest cricketers ever to have graced the game, certainly the greatest all-rounder”.

C. L. R. James, commenting on Wilton St Hill’s ability to judge the ball early in its flight and so quickly decide which stroke to play, said only Don Bradman and Sobers were comparable in having this capability of “seeing” the ball.

Wisden 1969 described the “lightning footwork” of Sobers as he got into position for his strokes.

Where do we look for his greatest achievements? John Arlott named the Lord’s Test of 1966 as “the classic example of his competitive quality.”

The West Indies, with five second innings wickets left, were only nine in front of England. Holford, their last remaining recognised batsman, came in to join his cousin Sobers. “From the edge of defeat, they set a new West Indies Test record of 274 for the sixth wicket and, so far from losing, made a strong attempt to win the match.”

Sobers, born in Bridgetown, Barbados, scored his maiden Test century in 1958 against Pakistan, and went on to score an unbeaten 365, passing the world test record score 364 set by Sir Len Hutton in 1938. Sobers scored 38 fours but, unusually in such a large total, no sixes.

He scored a 132 on the first day of the First Test at Brisbane in 1960. This was the “Tied Test”, both sides level over two innings each after five days. Wisden noted that “some observers considered Sobers’ innings the best hundred they had ever seen. (Today commentators seem to have dispensed with such subjective, if correct, descriptions of an innings as ”best”.  The measures today are statistical – how fast, many balls, how many scoring strokes, the number of fours and sixes and so on.)

In 2000 Sobers was named by a 100-member panel of experts as one of the Five Wisden Cricketers of the century. The other four selected for the honour were Sir Donald Bradman, Sir Jack Hobbs, Shane Warne, and Sir Vivian Richards.

And what of his opponent that day? Because this was, unusually, a showdown between just two men, illuminated that day under their own private spotlight, set apart in a team game played by 22. Malcolm Nash, from Abergavenny, Monmouthshire, was an able and experienced cricketer, a left-arm medium pace bowler. That same month he had taken six wickets in Glamorgan’s victory over Australia on the same ground.

However Nash, in common with many merely mortal crickets, lacked his opponent’s ability to switch bowling methods effortlessly. John Arlott wrote of Sobers: “Nothing in all his cricket was more impressive than his ability to switch from one bowling style to another with instant control.”

Nash had a good record, in his career, He will, inevitably, be remembered for that one over and not for his 991 first-class wickets, taken, on average, every 25 balls. He ended his career in 1985 at Shropshire, then moved first to Canada then in the USA, to promote youth cricket. He later lived in Kansas, having retired from cricket, and worked in the urban landscape business.

Nash is one of the most famous sporting “victims”, a category that includes football players who missed decisive penalties in shoot-outs at the end of games (the now much-redeemed England football manager Gareth Southgte, for example), and golfers overtaken at the last hole. But he seems to be at ease about the incident. “I don’t reflect on it ever as a bad thing,” he told an interviewer. “That moment is, of course, all to do with Garry Sobers, and not much to do with me.” And Nash did get Sobers out several times afterwards with his normal, seam bowling.